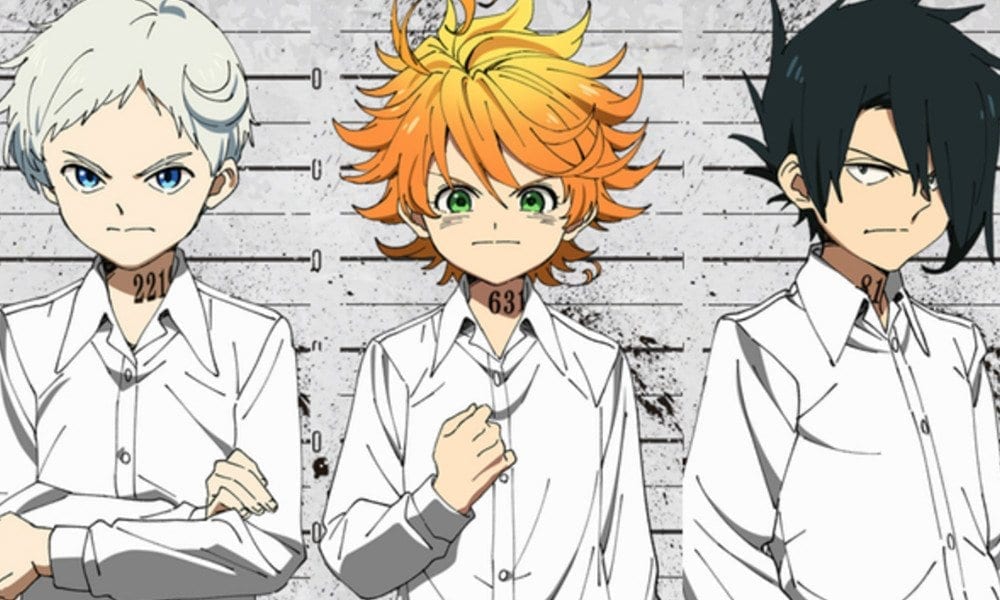 The Promised Neverland is a strange beast of an anime. For all of its cat-and-mouse mind games and deception, there are adventures through demon-infested terrain and horror-esque battles for survival with massive monsters. This can make finding shows that scratch the same itch difficult, but worry not: We’ve done some research and found five anime like The Promised Neverland if you’re looking for something similar.

Higurashi: When They Cry

In the secluded village of Hinamizawa, Keiichi Maebara finds what he believes to be an ideal life.

Shortly after moving to the town, he quickly befriends the other children who live there and settles into a rhythm of hanging out, exploring the countryside and ingratiating himself into the local culture.

However, this all changes as the town’s yearly festival draws near. Every time it rolls around, someone from the village is killed with no indication of who did it or why. This year is no different either: In no time at all, Keiichi and his friends realize something is amiss, and must do everything in their power to uncover the reason for this occurrence before they lose their lives.

An old hand when it comes to putting innocent young children in dark and dismal situations, Higurashi: When They Cry strikes much the same balance that The Promised Neverland does. For all of the dark implications and mysteries the cast must unravel, there are mind games being played between characters to determine who will make it out alive.

Admittedly, it can get a bit more gruesome than Promised Neverland though, so be aware of this fact before diving headlong into it via Funimation.

Average high school student Makoto Naegi appears to have landed the opportunity of a lifetime.

After being selected in a nationwide lottery, he has been granted the honor of attending Hope’s Peak Academy – a prestigious school where Japan’s best and brightest in a variety of subjects are brought together to learn and grow. Once their education is complete, they’ll then be tasked with pushing the country to even greater heights of accomplishment and success.

However, this dream come true quickly turns into a nightmare. Makoto and a handful of other students awaken inside the school with no memory of how they got there, and are informed that they’ve been selected to participate in a game of despair.

To win, and gain their freedom, one must kill another student and get away with it in a class trial; or else they’ll be executed for their crime.

It’s a solid setup, and fans of the Promised Neverland will quickly find plenty to love. The cast of Danganronpa grows on viewers quickly with their quirky behavior, and following the investigations into murders and the game of death provide plenty of twists and turns to get wrapped up in.

It’s easy to access and watch too, with the entire first season available through Funimation.

On the surface, Saya’s life is one of peace and tranquility, with a slight twist.

While she spends her days hanging out with her friends and enjoying a typical high school life, her nights are spent battling ancient evils that are drawn to the town. Fortunately, she carries within her the blood of revered shrine maidens, allowing her to do battle with these beasts via a special sword handed down through her family.

For this reason, she shoulders the burden of this responsibility without complaint; or at least, she does until she realizes things aren’t as they seem with her village, her family or even herself.

Though it can be a bit of a slow burn, Blood-C is a mystery worth unraveling. Each revelation offers just enough bread crumbs to make viewers want to keep watching, and its biggest twists send the story into overdrive in all the best ways.

Funimation has both the initial series and its sequel film available for streaming too, meaning one can dig into the entire story without delay.

Is it truly right to save every life you can, or are there some that were better off being snuffed out for the good of the world?

This is a question that plagues Kenzo Tenma, an accomplished surgeon and doctor whose career was nearly ended after saving a young boy instead of a politician. However, shortly after this occurred, all his critics were found dead, and the boy Kenzo saved disappeared.

Several years later though, Kenzo learns that these events were linked. The boy he saved was a maniacal genius, using his intelligence to manipulate and kill others; including those that threatened the man who saved his life. Filled with regret for what he wrought, Kenzo sets out to track down the person he saved and put an end to their reign of terror before it’s too late.

Though it might not have the same framework as The Promised Neverland, Monster is a masterclass in battles of wit, winding mysteries, and engrossing characters. Fans of the former will find it just as enthralling and will be dying to know how each character’s story ends after the first episode.

Regardless of who’s reading this, chances are high they already know what Death Note is about.

Its story of Light Yagami, a young man who finds a notebook capable of killing anyone whose name is written in it, is a staple of the medium at this point. It inspired a new wave of non-battle battle anime and manga and helped redefine what types of anime can draw in audiences both inside and outside of the anime fandom.

As such, it should come as little surprise that fans of The Promised Neverland can find plenty to like in the series. While it may not have as much mystery in figuring out how the world around it works, the story is packed full of mind games, subterfuge, and manipulating others into acting according to a pre-designed plan.

It’s longer than other series on this list too, with a total run of 37 episodes for viewers to dig into via Funimation, Hulu or Netflix.