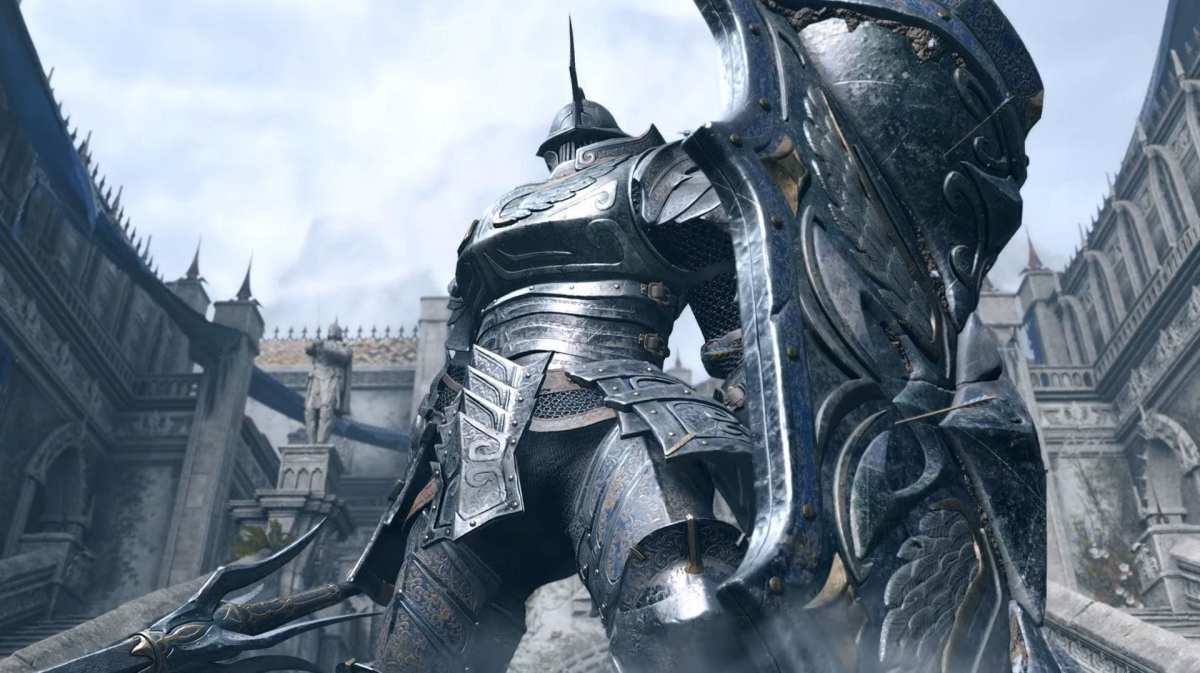 Now that the Demon’s Souls remake is out, we figured it would be the perfect time to take a look at all of the bosses in the game and rank them from worst to best. Do note that this isn’t necessarily a ranking of how difficult the boss fights are, but rather an overall evaluation of each boss, how compelling their designs are, and the impact they could potentially leave on players as they encounter them.

Kicking off our list, we’ve got the Adjudicator. Now it’s worth noting that the design of this boss looks absolutely creepy and unsettling in the Demon’s Souls remake. Whereas it just kinda looked like a weird blob with a bird for a head in the original, the remake enhances all of the Adjudicator’s disturbing features.

The music is fantastic, the presentation is great, the sound effects are chilling. The only problem is that the Adjudicator has such a boring move set that makes this fight feel extremely uneventful and anticlimactic.

From Software has always had a problem with dragon boss fights (Midir and Kalameet are the exceptions), and the Dragon God is certainly one of the most disappointing fights in the game, to say the least.

After its explosive intro at the start of the game, your showdown with it comes down to nothing more than a gimmick fight where you have to hide behind pillars to avoid its attacks, then slowly inch forward till you’re in range to deplete its HP quickly.

Leechmonger is one of the most interesting bosses you’ll encounter in Demon’s Souls, and there’s no denying the memorability of its design. While it’s not exactly a tough fight (then again, Demon’s Souls doesn’t exactly have a ton of tough boss fights), you still have to be careful when dealing with the Leechmonger.

Careless players will find themselves drawn into a protracted conflict as the boss consistently heals itself with its leeches and gets them on you.

The Dirty Colossus is another fairly straightforward fight that you can get past easily if you have a good shield. It does have one interesting mechanic, though, where it can encase your body in flies to deal damage over time.

To get around that move, you’d have to physically walk into the fire at the sides of the arena to get the flies off you. It doesn’t have a very complicated move set, but much like the Leechmonger, it can make short work of you if you don’t figure out its mechanic quickly.

One of the most visually impressive spectacles of the Demon’s Souls remake, the Armour Spider really tests your ability to time your dodge rolls and make use of your i-frames. This fight is a little more manageable with a ranged build, but if you’re playing a melee build, it can be pretty hellish.

Not only do you have to properly dodge its fireball attacks, you’ll also need to watch for its claw swipes once you get close to it. Not to mention the fact that your character’s movement gets severely impeded if you walk into a web or get hit with a web attack.

It’s very easy to get yourself into a bad situation where there’s literally nothing you can do but watch your character get eviscerated by the Armour Spider.

Not to be confused with the False King himself, King Allant is the real deal and you’ll meet him at the very end of the game. Gameplay-wise, there’s not a lot going on here. This is the easiest boss fight you’ll come across in Demon’s Souls.

But lore-wise, it’s astounding. Allant’s pitiful stabs and rolls on the ground are almost heartbreaking to watch, and his dialogue really drives home the themes of helplessness and desolation that are so prevalent all throughout Demon’s Souls.

Similar to the King Allant fight, Maiden Astraea herself isn’t meant to be some formidable opponent that you have to pull out all the stops to beat. Instead, she’s another lore-heavy encounter that pits you against a guardian NPC who won’t make it easy for you to get to her.

Garl Vinland serves as the maiden’s champion, and depending on whether you kill him before getting to Astraea, her dialogue changes, though she’ll certainly remain spiteful towards you until the bitter end.

The ambience of this fight is impeccable, and it’s one of the first moments in the game that will really cause the player to stop and think about their actions thus far, and if what they’re doing is really just.

The Fool’s Idol is a boss fight that’s gotten replicated in subsequent Soulsborne games, with Dark Souls III’s Crystal Sage being the most obvious example. It starts off simple enough with you just slashing away at a slow spell-casting sorceress, then things ramp up quickly as she summons clones and you’ll need to figure out who the real boss is.

In the meantime, there are spells being flung at you from every direction, along with mobs that will swam you if you’re not careful. Here’s a hint: the mobs will lift their hands up in prayer near the real Idol.

The Phalanx serves as the first proper intro fight in Demon’s Souls, and it’s a good one. The boss itself is literally just a large blob made up of multiple tiny blobs armed with shields and spears. Your job is to figure out how to get past those shields to deal some real damage.

While it is slow in movement, the Phalanx can still deal a lot of damage if you get too close. The trick here is to dispel the shields and blobs with fire, then run in and slash where it’s vulnerable.

The Vanguard is kinda like the prototype for all the large demon bosses you see in subsequent Soulsborne games. This is the OG Asylum Demon, the boss that’s meant to scare you right at the very start of the game, and it definitely gets the job done.

This boss has a predictable move set, but its sheer size is intimidating, and it’s designed to end you in just two hits.

It’s the perfect Soulsborne boss in almost every way: it can teach you how to block attacks, but also forces you to quickly learn that your stamina will be depleted instantaneously if that’s all you ever do.

You’ll need to learn how to dodge roll properly if you’re hoping to beat this one on your first try.

The Old Monk is hands down the most innovative fight in Demon’s Souls. While playing online, there’s a chance for you to get invaded while you’re heading up the Tower of Latria, and you’ll have to fight and kill another player in order to beat this fight.

It’s a fantastic way of incorporating PvP into an already challenging solo experience, and while your mileage will certainly vary depending on the kinds of opponents you get, the unpredictability of this encounter makes it one of the best fights in Demon’s Souls.

Similar to the Vanguard, the Maneaters serve as the blueprint and prototype for the Bell and Bellfry Gargoyles fights in Dark Souls I and II. Except this time, you’re on an extremely narrow bridge with very little room to work with.

The fight even fakes you out with just one enemy at first, and once enough time has passed, a second Maneater shows up, forcing you to rethink your position and how you approach this fight.

With the Demon’s Souls remake, the fight against Storm King feels about a hundred times more epic than it did in the original. The sound effects and music just overwhelm your senses, and the act of wielding a sword as badass as the Stormruler just feels incredibly empowering.

Again, this isn’t exactly a very mechanically tough fight. You simply need to time your Stormruler attacks right as the Storm King flies overhead, but it’s a beautiful visual spectacle and the sheer scale of the fight is so impressive.

One of the most unique fights we’ve ever come across in a From Software game, the Old Hero is a blind man who relies only on his hearing to locate you. He’s still unbelievably strong, though, and can destroy you with a single combo.

Your job is to try to be quiet and sneak around him to get some quick attacks in, then back off before he can retaliate. The fight is incredibly tense especially for first-timers, and that kind of tension has never been replicated in any boss fight in subsequent Soulsborne games.

If you asked any Demon’s Souls player what the most iconic boss of the game was, you’d probably get a lot of answers pointing towards the Tower Knight. The Knight’s design is classic medieval fantasy, and his sheer size feels intimidating and overpowering.

Couple that with the blaring music, and the archers just persistently raining down arrows at you from above, and you’ve got a boss encounter that again succeeds in overwhelming your senses.

The strategy is simple: hit his feet until he falls to the ground, then hit his head to deal massive damage. Sounds simple enough, but just the act of pulling it off and hearing the satisfying clunks of metal and hiss of the steam as you break his feet really help to sell the atmosphere.

This is where Demon’s Souls stops playing around. The Penetrator is arguably one of the coolest bosses in the game, immediately evoking Artorias vibes from the original Dark Souls.

The Penetrator’s intro cutscene is cool as hell, and he’s relentless and fast with his longsword, forcing you to make good use of your dodge rolls and single hits. He’s quick to punish you for being too greedy, and you can bet that he’ll be right on top of you if you try to heal at the wrong time.

As one of the last few bosses you’ll encounter in the game, the Penetrator really sets the tone for what you’re about to face once you get past him.

Old King Allant is the proper final boss of Demon’s Souls, and he certainly tests you on everything you’ve learned on your journey. He has incredible ranged attacks, a devastating AoE that covers way more ground than you might expect, as well as an iconic grab attack that can literally de-level you in the middle of the fight.

Allant is a very technical fight that you can beat easily and quickly once you’ve gotten his patterns down, but it’s the learning process that will wear you down before you get there. As the true final test of your abilities in the game, we’d expect nothing less.

Finally, we have the Flamelurker. While the Tower Knight certainly feels like the most iconic boss of Demon’s Souls, the Flamelurker would be a very close second.

This is the wall of Demon’s Souls. All of the other bosses you’ve faced up to this point feel like child’s play when you finally come face to face with the Flamelurker. While most of the bosses in the game aren’t exactly very challenging, Flamelurker feels like it really lives up to From Software’s notorious reputation of beating down players with excruciatingly tough boss fights.

You can’t block its attacks because its fire will hurt you anyway, but you have to be absolutely perfect with your dodges, as the Flamelurker has a lot of delayed hits that can catch you at the end of a roll. That being said, if you manage to beat this boss, you’ll likely clear the rest of the game without much difficulty.

Which is your favorite boss in Demon’s Souls? Let us know down in the comments below.