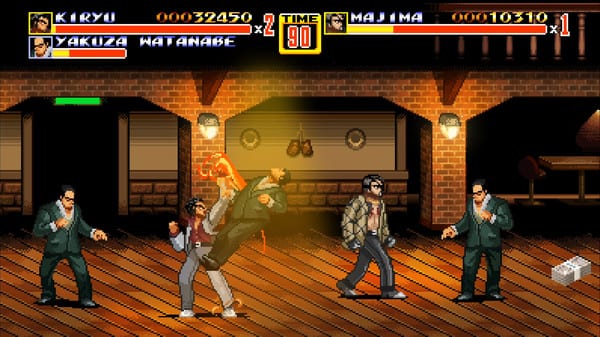 Japanese publisher and developer Sega is celebrating its 60th anniversary in a massive way. Starting today, several of the company’s portfolio of games will be available at a discounted price on Steam, and there are also some free-to-own retro-inspired titles available as well, such as Streets Of Kamurocho, a new beat-em-up that is a crossover between the Yakuza and Streets of Rage series.

Sega has also announced three other titles that will be making their way to Steam over the next couple of days. Just make sure to download them as soon as you can so you don’t miss out on them once they’re delisted from the digital store.

Armor of Heroes is a “retro-inspired multiplayer tank romp for up to four players in versus combat and couch co-op” that will be available from Oct. 15-19.

Endless Zone is inspired by Sega’s Fantasy Zone franchise to bring players a side-scrolling shoot ’em up. This one is available from Oct. 16 to the 19th.

Streets of Kamurocho stars Kiryu and Majima from the Yakuza series and will be up for grabs starting on Oct. 17 and will go away on Oct. 19. And then last but not least, Golden Axed: A Cancelled Prototype lets fans play through a canceled Golden Axe project that never got to see the light of day –this one comes out on Oct. 18 and goes away on Oct. 19.

And besides these free downloadable games, Sega will also put out tons of new content for the next 60 days that include let’s plays, interviews, competitions, and more. You can stay tuned to the company’s social media accounts to find out more.

You can also watch a trailer down below that shows off some gameplay from the aforementioned titles: