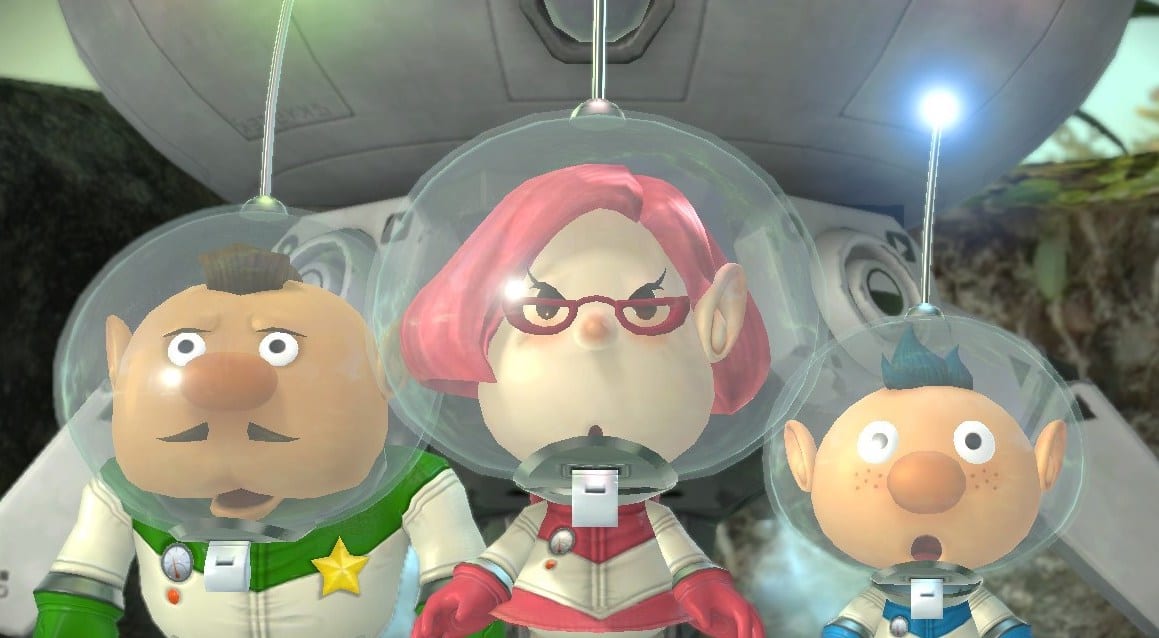 It’s been a long time since I’ve played a Pikmin game. I tried out Pikmin 3 when it first came to the Wii U in 2013, but it didn’t quite grab me as much as I wanted it to. For a series like this one that’s been near and dear to my heart, missing out on this entry was always a big regret.

But now that Pikmin 3 Deluxe has made its way to the Switch, I can say honestly that I definitely missed out on something fantastic, but the wait was so worth it to play it now with all of the added bells and whistles, even if some aspects of the game are still a little wonky.

Pikmin 3 Deluxe kicks off with an adventuring trio that are exploring a new, mysterious planet to bring back fruit for their own home planet. Things get a little hairy when the three of them get separated for the majority of the game.

You start with Charlie and then work your way to gather up all of your friends again, all of you attempting to work together to gather rations for your people back home. It’s a Pikmin game, so there’s not much else to the narrative.

There’s a handful of different locales that you get to explore in Pikmin 3 Deluxe as part of the story mode, collecting fruit and defeating enemies in each one.

Each mission of the game is based around days and once a day ends (usually around 15-20 real world minutes), you must use up one of your delicious fruit juices that you collect after each mission.

So basically, you collect fruit so that you and your squad can live another day to explore even more. The timed missions in Pikmin games have always been stressful for me. Having to worry about fully exploring a map while also growing your Pikmin army and then taking care of those same Pikmin is not easy.

And even the earlier Pikmin games had a 30-day limit for the entire story mode, putting on the pressure even more.

But Pikmin 3 Deluxe does not have those same issues, if you even want to call it that. Some fans would argue that Pikmin games are all about stress and the situations that come out of that and how you deal with it.

What do you do when you have 30 seconds to get back to your base, but all of your Pikmin are being attacked and murdered? How do you manage your time wisely so that all of your loyal and trustworthy Pikmin are always accomplishing a task?

Well, I’m not a fan of the timed day structure of Pikmin but what I do enjoy is the relaxing pace that Pikmin 3 Deluxe brings to the table.

You see, the Deluxe part of Pikmin 3’s title isn’t there for no reason. Nintendo has added many features and new modes that make it more accessible to a larger audience.

One of the most prominent features added to the game and most noticeable is the hint system in place for Pikmin newbies and people like me who like being told what to do and where to go in video games.

You can press the up button on the d-pad at any time, literally any time, and the game will just tell you what you should be doing at that moment. It’ll tell you how to solve a puzzle or how to beat a specific boss, and it’ll even show you arrows on the ground for you to follow.

Yes, that sounds a little too invasive for those who don’t like to cheat in games, but you should know that the hints can be turned completely off in the game’s settings. You’re free to play the game as it was intended without hints, it’s not forced onto anyone.

The hints stayed on during my playthrough, and it really helped me figure out what to do whenever I was aimlessly walking around, not knowing where to go or how to get places.

This elevated my Pikmin 3 Deluxe gameplay experience. Once I kept collecting more and more fruit, I had enough to last me weeks of in-game missions. I could freely go back to explore past areas and take in all of the surrounding flora and fauna.

Pikmin 3 Deluxe’s setting is so beautiful to look at, and there’s so many little nooks and crannies to discover. There’s a ‘Honey I Shrunk the Kids’ vibe in Pikmin games since the explorers are so tiny compared to the objects that encompass the environment. The pieces of fruit you’re collecting are humongous, and the bosses take the shape of normal bugs/creatures like a wasp or a slug.

I had such a fun time leisurely gathering my Pikmin, finding objects, and just soaking in the locales and wildlife. I do wish Pikmin 3 Deluxe was a bit longer, though, because the game came and went in about ten hours.

It was really abrupt. I had no idea the game was in its final act until I saw the credits rolling. There are so many cool ideas in this game, and especially the major boss fights you encounter. Each one has its own gimmick, and it’s delightful to strategize and have your army of Pikmin by your side while going off against a huge creature of the forest.

The fights were all chaotic as heck, with each one more exciting than the next. Even the names themselves are brilliant; Scornet Maestro? Quaggled Mireclops? Come on, those are great.

But there wasn’t enough to fully satisfy me. As soon as everything wrapped up, that’s when everything started to get good. I’m not complaining that Pikmin 3 Deluxe is a short game by any means, but the pacing felt off towards the back-half for me.

Another small negative that I have to bring up is that Pikmin 3 Deluxe has some strange control issues that can crop up from time to time. There are moments when you can’t move the camera at all or when you’re in a 2D-like space, and during these moments, it can make it impossible to move your character in a certain direction.

It doesn’t happen too often, but it was very frustrating when it did, especially if it happened during a boss fight. The controls themselves feel weird on the Switch in handheld mode, so I preferred playing with a Pro Controller, and I would recommend that as well.

Another added mode is the Side Stories, which are mini-missions starring Olimar and Louie as they go on their own adventures amidst the main story’s plot. The hype levels for this mode were an all-time high for me, but they ended up lacking compared to the main story missions.

The areas are tiny; there’s not much to do besides basic tutorial type stuff like learning how to harvest Pikmin and fighting boring enemies in an area we’ve already seen before. There are rankings so you can go back and get a higher score, but there’s really no need to, and it wasn’t compelling enough to make me want to replay it, nor is it memorable.

The missions mode returns in Pikmin 3 Deluxe, letting you choose between three types of missions: collect treasure, battle enemies, and defeat bosses. Again, unless you really want to do the same things you did in the story mode, nothing is new here.

Pikmin 3 Deluxe is a nice and simple finely-tuned Wii U port that’s perfect for newcomers to jump right into. It’s a charming and enjoyable take on the real-time strategy genre that’s not going to make you bash your head against a wall.

It’s a leisurely, slow-paced experience that is fantastic for just kicking back and chilling after a long hard day on the job. Of course, you can raise the difficulty if you want a challenge, but Pikmin 3 is laidback as ever, and because of the changes here, it’s more streamlined and accessible for everyone.

It may not have enough new features for revisiting players to sink their teeth into, but there’s enough content here that’ll make it worth your while.

Now, when are we getting Pikmin 4, Nintendo? 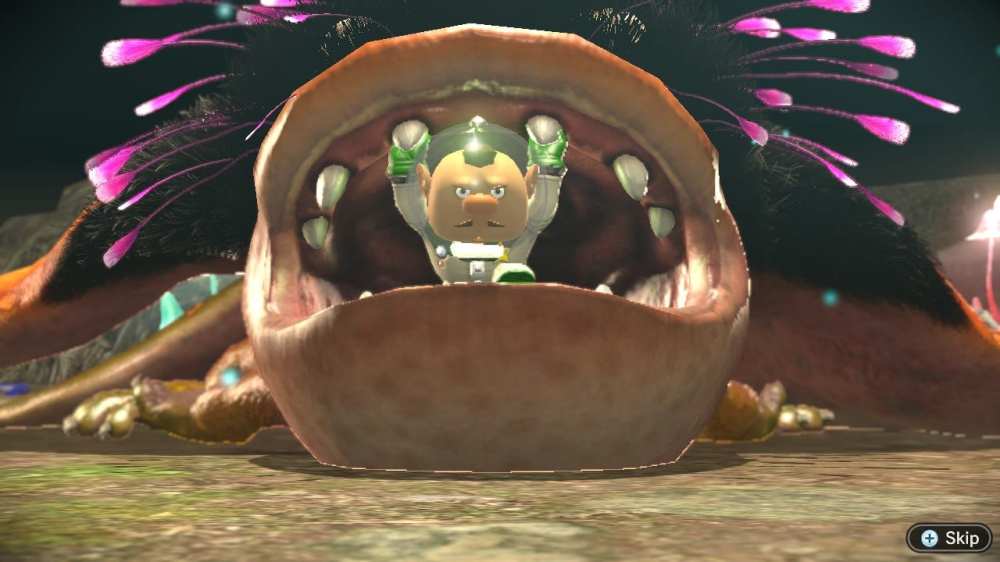