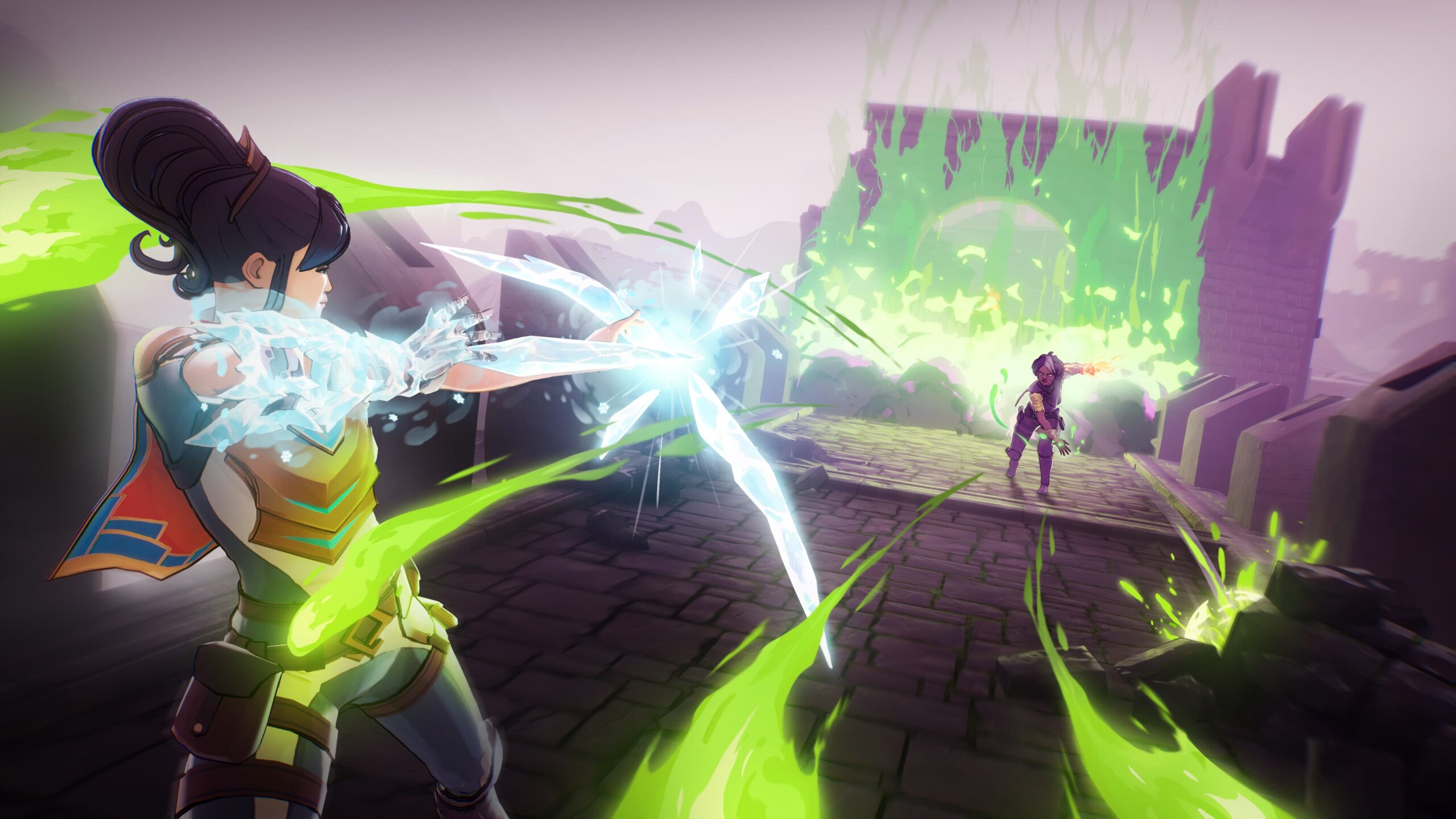 Spellbreak is a unique battle royale game that focuses less on managing inventory, building, firing guns, or anything like that, and instead is about mixing spells from various classes together until you find something that works for you. In this guide, we’re going to rank what we feel are the best elements in Spellbreak and also go over the best Spellbreak class combos for each of these elements that we feel pair nicely together.

For the record, although we’re ranking the best elements and best class combos in Spellbreak, during our play ime we have not found that any of the classes are “bad.” It truly comes down to preferred playstyle and, of course, what you can actually find while you’re out scavenging.

There are so many worthwhile class combos out there in Spellbreak, it really comes down to what you like best. So whether you’re playing solos or squads, feel free to get some ideas from this article, but also feel free to disregard them and do what you think works best.

Again, let me reiterate, Conduit is technically the “worst” Spellbreak class on this list but it’s far from being actually bad. The Conduit is very good but you’ll need to ensure you’re taking advantage of all of its strengths and perks to make the most of it and in the heat of battle, that can be tough.

Lightning Strike is brutal when you get hit by it, but the problem is there’s a short delay giving someone who is paying attention a chance to get out of the way. It’s great, however, when you get the jump on someone that is distracted.

Conduit also allows you to effectively use your Rune twice once you level it up after casting Lightning Strike. This is a major perk, but it does force you into playing a certain way. If you’re not taking advantage of it, there are better options.

Conduit’s Lightning attacks combos nicely with both Ice and Poison which will allow you to easily hit enemies that are slowed by the Ice and Poison attacks with massive Lighting Bolts that benefit from additional effects in addition to just being brutally powerful on its own.

Pyromancers are all about controlling the flow of battle with their massive Fire Walls and damage over time fire attacks. The problem is that Flame Wall can be a bit hard to actually land and it’s more useful as a defensive tool than an offensive one.

The Pyromancers perks are OK, but you can find similar perks in other classes that provide other more useful benefits and attacks that are easier to land such as the Tempest’s ability to Fly and Poison Cloud being generally easier to land (and it can make you invisible).

That said, Pyromancer is an excellent “sub class” as it can combo with so many spells in the game not only offensively, but also defensively. Toxicologist is a great class to pair it with to light those Toxic Clouds into potent Dragonfire.

The Stoneshaper class combo will allow you surprise enemies that are otherwise distracted or obscured by your fire attacks with powerful close and long-range spells that can be fire’d up.

Wind aka is a great class that pairs well with just about anything thanks to its very useful mobility perks. In the Spellbreak early game, though, it can be a little rough until you find the class combo you want to combo it with.

That said, its Wind Shear attack can quickly light someone up if you catch them off guard, and has the added effect of deflecting spells if you’re skillful enough to take advantage of that perk.

What Tempests really enjoy though is utilizing runes and its Tornado spell to launch itself in the air to take advantage of the Squall passive perk that boosts your spell damage while in the air.

This is an amazing perk considering being in the air and having good vantage is incredibly useful in Spellbreak even before accounting for the damage and defense boost Squall provides. But once again, it is a bit dependent on having another combo’d class to take advantage of all this added mobility and utility.

Allow us to suggest Frostborn, AKA Ice as class combo that benefits greatly from Tempest’s perks (more on that when we get to the Ice section).

Stoneshaper works well too as it gives you the ability to be lethal at pretty much any range, and to use your Wind Shear attack to send Boulders flying far, far across the map, especially if you launch yourself up in the air to get a better view.

The Stoneshaper is just a solid all around class that mixes powerful close quarters attacks with long-range capability as well.

Stoneskin on its own will make the Stoneshaper bulkier than any other class in Spellbreak. Any edge you can get is always a plus.

On top of that Shockwave is a very powerful close-range attack that most players will want to avoid getting hit with at all costs. Even if players are far away though, you have the added benefit of eventually having up to two charges of the powerful Boulderfall spell to attack with.

The Toxicologist class pairs nicely with Stoneshaper for reasons we’ll explain more in-depth in that section, but also the Pyromancer is also a very nice class combo as well.

Not only does it provide some area control that the Stoneshaper lacks, but you can turn your Shockwave attack into a massive fire wall by simply using Shockwave through a Fireball remnant.

Toxicologist is not only a powerful and useful class, it’s also a relatively easy class to play and is great for beginners.

It’s a very annoying element to go up against. Not only does the toxic effect slow you down, it will deal powerful damage over time to anyone that doesn’t move out of the way quickly.

On top of that, the Toxic Clouds can obscure vision on top of being deadly and they can be easily detonated by just about any other class attack into a powerful burst of damage.

Also, the Toxicologist’s basic attack, Toxic Spray, covers a wide area and isn’t very hard to land which is nice for new players. And finally, the ability to go invisible by passing through clouds not only is a nice cover to confuse your opponent but also powers up your Toxic Spray damage to be even more powerful.

The biggest hurdle of the Toxicologist is its mobility. Try to find a Rune that will help you zip around opponents. You can pair Toxicologist with Tempest of course to help with that, but Stoneshaper and Pyromancer stand out as being particularly good options as well.

Stoneshaper will make you absolutely brutal to take on at close range with the added defense and powerful close-range attacks paired with a Toxic Cloud to obscure where your strikes are coming from in addition to dealing DoT. Slowed enemies are easy pickings.

Pyromancer gives you even more utility to control the flow of where enemies can move with Fire Wall and will also allow you to easily ignite your clouds into powerful Dragonfire.

Frostborn arguably has the highest skill ceiling of any of Spellbreak’s classes, but if you’re skillful it has potentially the highest reward. Frost attacks are slow and you need to be precise with them.

However, not only are they powerful in their own right, but there are so many simple ways to follow up with another classes’ spells to freeze your opponent and make them an easy target for an exile.

You can freeze toxic clouds, a quick stone or wind follow up while an enemy is standing on ice will also freeze them, etc., there’s a lot of ways that you can stop your enemies in their tracks to make them easy prey.

Your bow attack will also, of course, give you a way to quickly get around when you run the ice stream it leaves in its wake after firing, and if you’re hustling to get in the safe zone, or just navigate around quickly, it’s an invaluable spell to have.

The trick of course with Frostborn, though, is that you need to be able to land attacks with the bow and have the skill to quickly follow up otherwise you’re a sitting duck.

If you have a hard time with that, I’d suggest starting with an easier Spellbreak class combo, but if you can pull it off, Frost is arguably the best class in the game in the hands of a skilled player.

Tempest aka Wind pairs very well with Frost as it can not only allow you to very quickly and easily freeze your opponents but also gives you the added mobility to burst high into the air and get clean shots. Conduit, AKA lighting also is a solid class combo as you can punish slowed/frozen enemies with brutal Lighting Strike attacks.

Those are our picks for the best Spellbreak classes and class combos. What are your favorite combinations? Let us know in the comment section below.