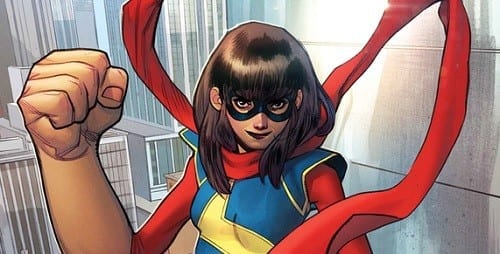 Earlier today, the news broke from Deadline, that they presume Iman Vellani will be cast for the role of Kamala Khan in the Disney+ show, Ms. Marvel. As of right now, the rest of the cast is a mystery, but the details will certainly roll out as we get closer to the 2021 start date of the series.

For those unfamiliar with Kamala Khan, she is a teenager from New Jersey that has the ability to stretch her arms out to extreme lengths and morph her fists into massive blunt objects in order to pummel enemies. Khan is the first Muslim Marvel hero and the first Pakistani-American one as well.

In the comic books, Khan is also a massive fan of Captain Marvel (aka Carol Danvers), but we’ll just have to wait and see how close the Disney+ version is to the source material.

This potential announcement of Iman Vellani being cast as Kamala Khan comes right on the tail end of the recent trailer for another Marvel Disney+ program, WandaVision.

As of right now, there’s no indication of how or if Ms. Marvel will fit into the MCU films or other Disney+ shows, but they appear to still be fairly early on in the development of this show considering that they just found their lead.