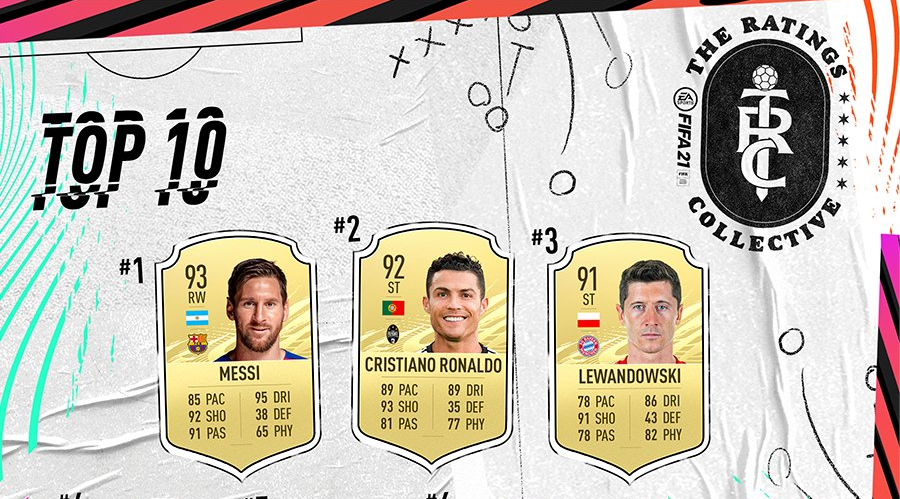 We’re just under one month from the launch of FIFA 21 and EA Sports has now revealed the top 100 highest rated players and the top rated players in each of the game’s five major leagues.

While most of the top 100 in FIFA 21 are the players you’d expect, with Messi, Ronaldo, Kevin De Bruyne, Mbappe, and Neymar staking places in the top 10, there are some interesting individual ratings that are worth pointing out. Before that though, check out the full top 100 here or the top 10 down below.

As you can see, Lionel Messi and Cristiano Ronaldo are still the highest rated players in the game, but they’ve both been downgraded by one from their FIFA 20 ratings for their FIFA 21 ratings.

It’s also interesting to see that a lot of attacking players have randomly been crucified in the pace category for FIFA 21. For example, Jadon Sancho only has 83 Pace and Serge Gnabry only has 82. Having watched Bayern Munich’s run in the Champions League, it’s difficult to see why Gnabry has got that pace rating.

EA Sports have also helped players plan their teams for one FIFA 21’s Ultimate Team becomes available by releasing articles that introduce the best players for certain positions and leagues.

For now, the whole database of ratings is not available, but you can expect that in the next couple of weeks as the Web App and EA Play trails become available.