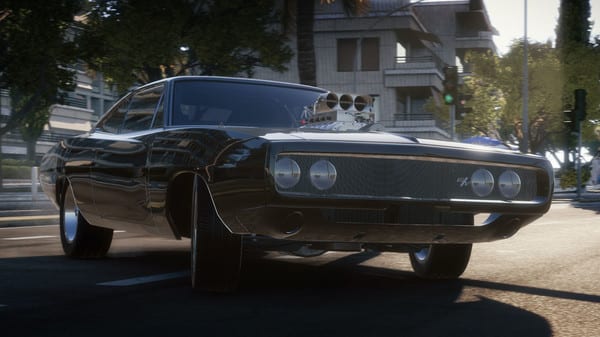 Here’s a hypothetical for you: Say you’re faced with an armored tank that can go 50mph and is armed with a flamethrower. Somehow, you’ve got to destroy it. You wish you had a gun or a flamethrower of your own or a rocket launcher or machine gun or any sort of weapon that fires a projectile. None of this is available to you. So, what’s your go-to?

As it turns out, Crossroads’ Vin Diesel has the genius answer, and that’s to ram it with a Dodge donning spikes protruding from the wheel arches. Spikes! That’s it… all you need to take out a 40-ton war machine that spits 100-foot streams of liquid gasoline.

This is actually the opening set-piece in Fast & Furious Crossroads, and it only gets more ridiculous from there.

Crossroads is bad in all the conventional ways. It’d be generous to say the visuals are on par of those from the previous generation; the missions are repetitive, and the driving itself is shockingly bad for a studio with such a stellar track record with racing games.

I somewhat expected the game to be poor in a technical sense. I mean, the trailers weren’t exactly flattering. What I wasn’t prepared for was quite how hilarious this would be in terms of how ridiculous it is throughout and truly awful it is in some areas.

Whether Vin Diesel knows it or not, Fast & Furious is a series designed around its ridiculousness. Jumping supercars between skyscrapers and flying headbutts from moving vehicles are par for the course, with the “it’s all about family” framing tying everything together.

Crossroads has those same crazy setpieces, and family bonding is still a core theme, but Slightly Mad’s game has me laughing at every moment and not just when it’s actively trying to be silly.

The jumping on and off moving trains, stopping bad guys from launching satellites, and exploding trucks are amusing enough, but there’s a whole bunch of unintentionally amusing things to laugh at every few seconds, too.

For example, as you arrive at Crossroads’ first main location, Barcelona, instead of telling you where you are with a splash screen or notice on the HUD, the word BARCELONA stands tall as an actual part of the city, each letter standing taller than any building you can see.

Then, there is one mission about half way through the campaign that highlights how half-arsed and ridiculous Crossroads is. In what might be the worst mission I’ve ever played in a racing game, and maybe beyond, I had to chase a delivery truck up a mountain pass in Morocco in my own delivery truck, with the aim being to take it out and replace it on the route.

On the winding roads, which were tough enough to navigate anyway in a heavy truck that’s made heavier by Crossroads’ handling, rocks would fall from what was supposed to be the cliffs at the side of the road. The thing is, though, a lot of the road isn’t surrounded by cliffs, so the rocks would just fall from the sky in impossible directions every 30 feet or so.

Crash into the rocks too many times and you’d alert the driver and fail the mission, although I’m not sure why me shunting him with my van wouldn’t have the same affect.

With the awkward conversation you have on the way up, the weirdly appearing rocks, the horrible handling, and the ugly setting, it was the perfect example of what’s wrong with Fast & Furious Crossroads. It tries the ridiculousness, but doesn’t have the quality to back it up in any area.

Look at the screenshot above, which is from the second half of that mission. Are we supposed to think that workers set up the barriers like that, 20 feet apart and alternating sides of the road. I get that it’s supposed to be a way to get the player to do something more than drive straight, but surely something less obvious could have been done.

There are plenty of these examples, each one made worse by the bargain bin graphics and presentation. They’re bad to the point that you just have to chuckle. Fast & Furious movies will make you smile but Crossroads makes you actually laugh AT it.

Beyond any set-piece or particular mission, it’s the combination of Crossroads’ writing and acting that make it the glorious disaster it is. If it was laughing at itself, it wouldn’t be quite so funny, but it’s too bad for that to be the case.

I’ve already mentioned that opening when Vin says that he doesn’t need the gun or flamethrower Letty wishes she has because the wheel spikes are much better for taking out a speeding tank, but here are a few more examples of ridiculous things that characters new and old say in Fast & Furious Crossroads.

From the first moments you take control of Vienna in Barcelona, she says the following after crashing into a member of the public (who all strangely seem to enjoy crashing into each other anyway).

Then, there are a few examples of cringeworthy writing in Crossroads that wouldn’t even make the first-draft of Fast & Furious 10.

Seb to Vienna: “Ok, I think we’re clear. It’s carrying on down the road. Thank you my love. Those must be those famous driving skills you told me about, eh?”

Letty: “You know me”

Seb: “When we met, I was completely honest with you about some of my ‘business dealings’. Some of which might be considered ‘extralegal’.

Vienna: “I thought you were a “provider of information.”

Seb: “I point things out to people. And if they’re useful, I get paid”

“You’ll be surprised what we can collect from the dead”

After Cam and Vienna meet up with Vin and Letty, it’s revealed that they’re working to take down the Tadakul alongside Interpol, for some reason. Cam and Vienna are asked to go undercover as part of that delivery truck mission I mentioned and Vin has these very simple instriuctions.

Vin: “Interpol will set you up with fake backgrounds strong enough to pass security. You’re also going to have to learn that ancient beautiful language called Arabic”

Sure that sounds easy enough. Bring on the next scene, seemingly no later than a day or two after, and Vienna and Cam now know Arabic.

There are other little things that I couldn’t help but laugh at that come up as part of the story. In one mission, you have to tail a truck and not be seen, but the truck hasn’t been set up to drive on the right part of the road, so it knocks down every lamppost it passes.

Letty also tries to shoot people a few times, which is very un-Fast and Furious.

All of the laugh-worthy writing is made infinitely worse by the voice acting performance.

Diesel is probably the biggest offender, but not a single performer comes across well. Lines sound like separate parts of conversations, they’re awkward, sometimes overacted, and always wooden. It’s painful at times, and so perfectly matches the quality of the examples above that you can’t help but crack up laughing.

I expected some elements to be subpar, after all, Vin Diesel isn’t a voice actor but I hoped Fast & Furious Crossroads would be like the movie series: ridiculous but fun and clearly top quality in at least some technical aspects.

It’s missed my hopes by a long way though, being stunningly bad in some areas to the point that you simply have to laugh at it. Some of the awfulness truly has to be seen to be believed.