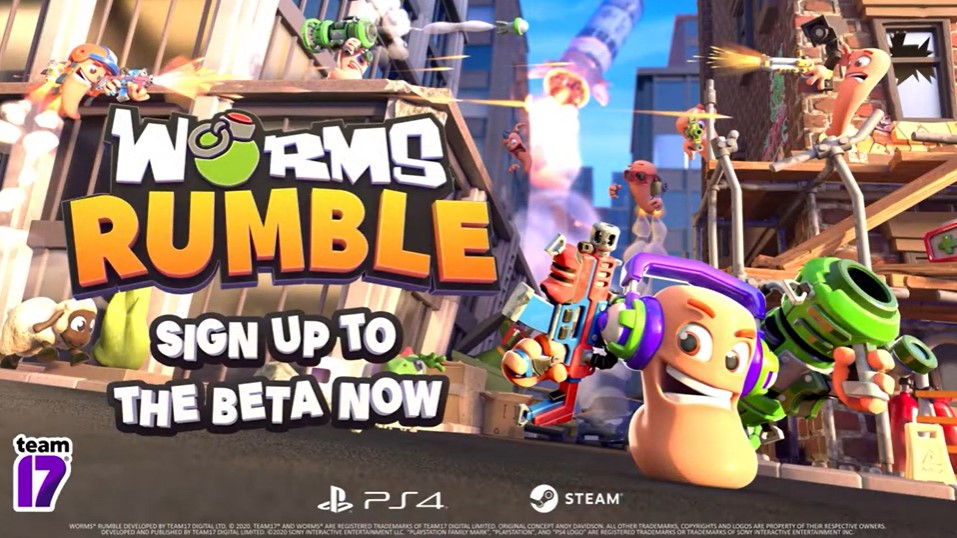 Team17 is finally jumping on the battle royale bandwagon with its latest Worms title. Earlier today we got our very first look at Worms Rumble in a YouTube announcement trailer.

For those of you unfamiliar with the Worms franchise, these games are typically 2D or 3D turn-based tactics titles. They feature numerous wacky weapons like the sheep launcher, holy hand grenade, and other out-there arms. We got our first look at the holy hand grenade at the end of the trailer, but the guns in the reveal were all relatively conventional.

Team battles have also been a hallmark of the Worms franchise over the years. But this time around, all the action will be completely real-time with multiple worms jumping around the same map. The classic formula has been traded in for the battle royale format this time around.

But don’t expect anything like PUBG or Fortnite when it comes to player counts. Worms Rumble will feature 32 players per map. And from what we’ve seen so far, it appears that all of these maps will be 2D with multiple platforms, staircases, and escalators to help you navigate the terrain.

Besides the battle royale mode, it looks like we’ll also be getting a Deathmatch mode. There is no indication if a team deathmatch will be included at this point.

And if you have friends on PC but you’re on PS4 or PS5, then that’s no problem. Worms Rumble will feature cross-play compatibility with both consoles and PC.

You can pick up the latest title in Team17’s later this year for PS4, PS5, and PC. But if you can’t wait that long, then you can sign up for the beta right now.

If you want to check out the full Worms Rumble reveal trailer from Team17, just check it out below.