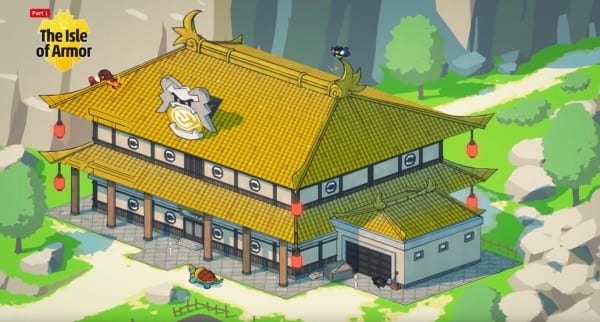 Pokemon Sword & Shield’s first expansion, Isle of Armor, has finally arrived for all expansion pack owners. Once you get your Armor Pass, and arrive on the island, you can dive right into exploring this new area, or beginning the expansion’s main story quest. However, what’s not clear is where the Pokemon Center is on the Isle of Armor and how you’re supposed to heal your Pokemon, move them and swap them out. Here’s everything you need to know.

Okay, so let’s explain how the Pokemon Center works in Isle of Armor… there isn’t one. At least, not in the way that you’re used to. You’ll arrive on the Isle of Armor and your only anchor point to civilization is pretty much just the Dojo, which is not a Pokemon Center.

However, to the right of the Dojo right when you walk in is a door with a Poke Ball on it. That door allows you to change and also heal your Pokemon, but that’s all… at least at the start.

Once you clear the three trials, you’ll able to upgrade the Dojo using Watts by talking to Honey.

If you donate a total of 20,000 Watts, you’ll be able to add a full-service Rotomi which will allow you to swap Pokemon, items, and everything else you’d normally be able to do from a Pokemon Center.

Currently, we’re still upgrading the Dojo, and there might be even more services that you can add to it. Once we figure them out, we’ll update this post. At the very least though getting to 20,000 Watts donated will get the Dojo to a respectable level of use.

If you want to be cheap, you can always just fly back to the mainland, do what you got to do, and then fly back the Isle of Armor.

That’s all you need to know about the Isle of Armor Pokemon Center in Sword and Shield. Hopefully this helps you heal your Pokemon, and get all of the other services you need.