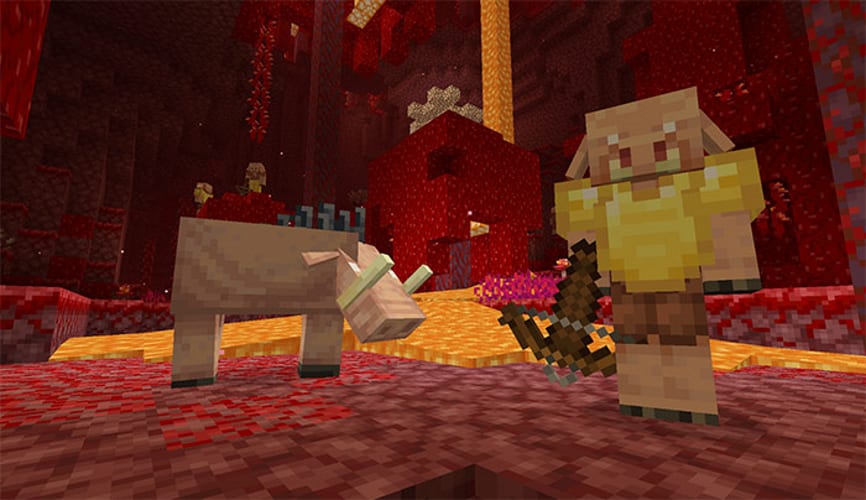 The Nether Update for Minecraft will release for both Bedrock and Java versions of the sandbox title on June 23, developer Mojang Studios announced today. The update will revamp the lava-filled Nether region with new biomes, enemies, materials, items, and more.

One of the biggest additions in the update is the netherite ingot, which can be found in the Nether and is fireproof. Weapons, armor, and items made from netherite ingot material are stronger than diamond, but the material must be used to upgrade existing diamond times.

“Eventually, we came up with the idea that netherite could be used as a material to upgrade your current equipment, and not just an independent resource used to create its own tools and armor,” chief creative officer Jens Bergensten said. “That way we would maintain the value of diamond while also adding something new!”

New enemies include the unpredictable, protective Piglins and the boar-like Hoglins. The update will also include new blocks, such as the Target Block that allows players to activate Redstone switches from a distance.

The Nether Update for Minecraft will launch on June 23 for the Bedrock version, which includes PlayStation 4, Xbox One, Nintendo Switch, iOS, Android, and Windows 10. The Java version will also receive the update on the same day for PC, Mac, and Linux.

Grab your most fireproof calendar, and start frantically circling June 23rd: the Nether Update starts rolling out on both Bedrock and Java… Why, this Tuesday!