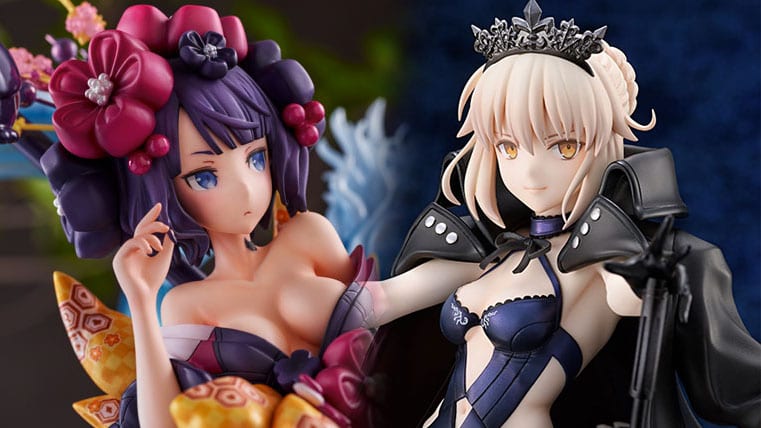 Fate/Grand Order is one of the most popular mobile games of all time, an Japanese manufacturers continue to deliver more and more figures portraying its characters.

This time around we get two rather gorgeous figures with very different price ranges, Foreigner/Katsushika Hokusai by Phat Company and Rider/Altria Pendragon by Amakuni. Both are currently available for pre-order at Ami Ami.

Katsushika Hokusai will take even longer with a September 2021 release window and a sizable 35,200 yen ($328) price tag.

Below you can read the official description for both.

“From “Fate/Grand Order” AMAKUNI presents Rider/Altria Pendragon [Alter] looking even more the tyrant maid of summer!
The garage kit produced for and sold at an event by sculptor Grizzrypanda is released now as a complete figure under the complete supervision of TYPE-MOON.

The form for the figure is the Third Ascension.
Even the fine pattern of the water pistol Secace is expressed and weapon Excalibur Morgan she wields are sculpted along with a magnificent pose fit for Servant.

Of course the fine ornamentation and folds of the coat and dress are not forgotten and the glossiness of the gloves is carefully recreated.
It also has a cool smile suitable for an Alter giving it a finish that truly matches the quote “A maid is a perfect being. They do not make a single mistake.”

Furthermore, the coat can be removed.
You can enjoy displaying it with the shoulders and back of the dress revealed if you like.

Add this figure to your collection and enjoy it first hand!”

“My kimono being all disheveled like an oiran is a good look for me? Aw, q-quit it…that’s embarrassing… …Even Toto-sama’s gone all quiet.”

From the popular smartphone game “Fate/Grand Order” comes a scale figure of the Foreigner class servant Katsushika Hokusai. Her obi belt and various flower decorations throughout the figure have been faithfully captured in figure form. She’s been recreated based on her 2nd Ascension appearance, with her chest boldly exposed beneath her disheveled kimono.

Wave effect parts and plover bird effect parts based on Hokusai’s woodblock print “Mount Fuji Above the Sea” are included and easily attached to the figure, making for a beautifully detailed display piece. Be sure to add her to your collection!”

Last, but not least, have a few images.