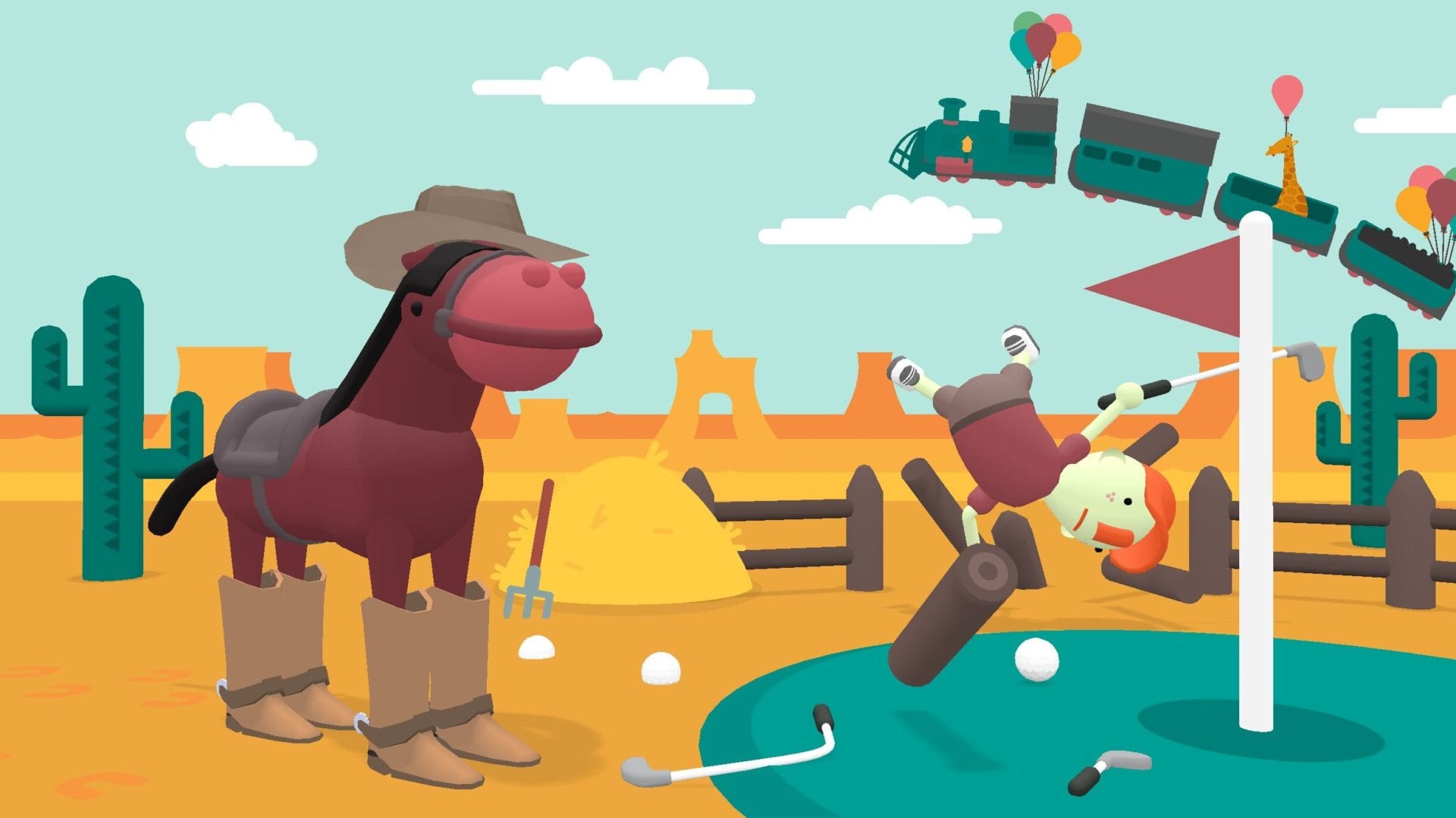 What The Golf? on Nintendo Switch

There are loads of arcade golf games out there. Some have crazy courses and some even let you put a little top hat on your ball. What The Golf? isn’t that. It’s not even really a golf game. As its description reads, it’s a “golf game for people who hate golf,” but it’s really a game that needs to be played to be understood.

With it coming over from mobile devices, having been one of the darlings of Apple Arcade’s launch last year, it’s pretty simple. For the most part, you power up a shot using a button or the Switch’s touch screen and aim it with the thumbstick, trying to hit the flag.

Yes, it sounds like golf, but What The Golf? is out to trick you. Throughout the hundreds of levels, I don’t think you once just hit a ball towards a hole, at least not without something there to interrupt you along the way.

Golf is just What The Golf?’s engine for what it’s truly about: surprises and often hilarious platforming situations. The best way to help you understand what to expect is to simply describe one of the levels.

Not long into the game, What The Golf? introduces a soccer ball. Unlike other items, you can hit it as much as you like, whether it has come to a stop or not, and your aim is to hit it into the goal that should be nearby.

In one level, which is presented like a 2D platformer, there’s a ball between two goals, just one hit away from each. Without thinking, I aimed the ball towards the goal on the right and let off a shot.

Instead of the ball rolling into the goal, the left hand goal flipped in the direction I shot. It is one of the most simple surprises in What The Golf? but the game is spot on at throwing something unexpected at you every level or two. You’d think you’d learn to spot the surprises after a couple, but you don’t, which is a testament to how well designed every level is.

The surprises don’t repeat too often and are mixed into the various themes so well that they keep the same affect even when they do.

The situations aren’t limited to hit this thing towards this thing either. What The Golf’s surprises come in all shapes and sizes. There are levels that see you hit more than one thing at a time, there are races, levels themed around other recognizable games (I don’t want to spoil what they are), and actual puzzles.

The level design is ingenious throughout and I just wanted to see what wacky theme it could throw at me next.

It’s also the funniest game I’ve played in a long time. The wonderful design, barrage of surprises, and glorious level ending puns throw joke after joke at you and they’re genuinely hilarious. Considering it’s a game that includes little text and no dialogue, What The Golf? is really well written.

Throughout the first hour or two, I frequently had to pause it mid level to regain my composure after I lost it at a situational joke. As a game to cheer you up, it’s perfect.

The overworld design, which structures the game into bitesize chunks also works just as well on Switch as it did on mobile. You’ll want to see what surprise is around the next corner and want to beat the three parts to each level, getting the crown and working towards 100% competition. No levels feel like filler content, each having something that makes them unique.

The only issue I had with some levels was that not many can be considered puzzles exactly. Very few of them really have challenges to overcomes or targets to beat. The design of What The Golf? makes up for that for the most part, but keep in mind that it’s not a puzzle game in the traditional sense.

As the developers say, it’s “a silly physics-based golf parody” rather than a puzzle game. The only potential issue caused by that is a lack of challenge, at least on a frequent basis.

The Switch version is also the definitive version of What The Golf? due to the exclusive inclusion of the Party Mode. The silliness and variety is brought over in full force, with you having to compete against friends playing at the same time.

You’ll be racing to flags, trying to complete sets of levels in the fewest number of strokes, or attempting to knock opponents off levels. It’s hilarious fun and the perfect addition to the Switch’s long list of party games.

What The Golf? was a highlight of Apple Arcade’s launch lineup but it feels right at home on Switch. It’s a joyous mix of simple gameplay, hilarious situations and ingenious design, made even better by the inclusion of the riotous Party Mode.