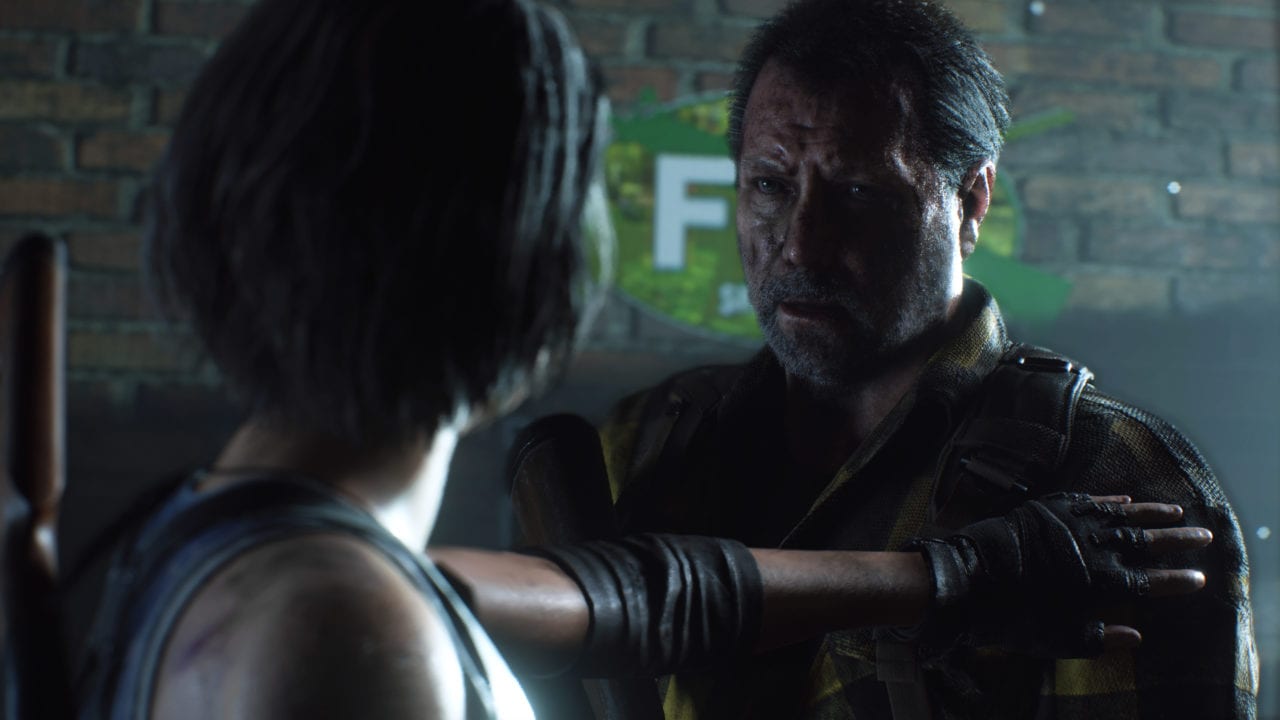 Part of what makes Resident Evil 3’s story so compelling for fans of the series is that it takes place at roughly the same time as its predecessor. Even in the original, there were clever little nods to Resident Evil 2 that intertwined the events of Raccoon City’s demise.

But Capcom’s latest remake goes a step further, adding a bunch of fun easter eggs that tie into both RE2 and the wider series. Here we’ll go over several we found that we thought are worth explaining.

Obviously not an easter egg that you’re likely to miss, though you may not have quite appreciated the significance of this live-action montage unless you’ve played the original Resident Evil.

The 1996 classic featured a live-action intro that scared many a school kid half to death (but definitely not the author of this article), though it is perhaps best remembered for its horrendously cheesy b-grade acting.

Up until now, Resident Evil was the first and last example of a live-action sequence to be featured in a mainline Resident Evil game. Thankfully, the standard of acting in this latest one is a hell of a lot more convincing.

You will have seen Dario Rosso in Resident Evil 3 Remake’s opening moments, just as you do in the original game. The circumstances are slightly different this time as it’s only in passing, whereas before it was the location of the game’s first save room.

Quite apart from just being a cool re-imagining of a classic scene, you may not know that you can actually prompt more conversation with Dario once he’s locked himself away in the container. Some of the lines are exactly the same as the original.

One peripheral character from Resident Evil lore that didn’t appear in the original Resident Evil 3 but does make a surprise appearance in the remake is Robert Kendo.

The gunshop owner’s backstory was fleshed out in Capcom’s remake of Resident Evil 2 (he didn’t last very long in the original) as we learned of his unwillingness to leave his infected daughter, and there’s a cool scene that sheds further light on his backstory in Resident Evil 3 Remake.

You can’t miss Kendo, but you may not know that if you approach the door he closes behind him and listen in, there’s some dialog with his injected daughter to be heard.

In what is perhaps Resident Evil 3’s coolest Resident Evil 2 easter egg, we learn that it is zombified Brad that takes a chunk out of poor old Marvin Branagh and dooms him to the same fate in the process.

It’s a complete change from the original game, which instead saw Nemesis finish off Brad in gruesome fashion. Resident Evil 3 Remake gives you the choice of leaving zombie Brad or killing him –pro tip: do the latter and key the ID card.

Another obvious easter egg, then, right? But did you stop to think about the irony of both Marvin and Brad’s death? No? Well, we’ll tell you: both give exactly the same advice to you before they resign themselves to their fate: don’t hesitate to take the shot as they did.

It’s what got them killed and it’s the message Marvin gives to Leon, which we learn is one he’s reflecting on after being bitten by Brad, who only hours before gave the same advice to Jill after making exactly the same mistake.

One of Capcom’s most iconic IPs, Mega Man is plastered all over Raccoon City. The above screenshot is taken in the Toy Store in the Downtown area, but you’ll find it in other locations as well.

You’ll later discover, for example, that Dr. Bard is a big fan. There are Mega Man figures and posters all across his desk area.

Carlos’s exploration of the iconic Raccoon City police department yields a number of cool easter eggs. Several of them are a hangover from the original game, like the motorcycle jacket we’ve pictured above, but there’s also some new stuff to unpack.

When you’re in the West Office, for example, take a look at the paraphernalia for Leon’s welcome party and listen to Carlos give his own congratulations. Or you can check out one of the doors in the Main Hall and listen to his comment on how the door locks look weird. Fair enough, too!

The coolest easter egg, however, is a new puzzle that tasks Carlos with blowing down the locker room wall to access the S.T.A.R.S office. If you’d wondered why the area was in such a state during your Resident Evil 2 Remake playthrough, now you know.

A cryptic tease is on display at the very end of Resident Evil 3 Remake, and it’s one you might have totally missed if you’d been hasty in skipping through the credits.

If you wait until the very end of the credits you’ll see a short sequence of a character picking up a broken vial of the t-virus. Is this Capcom teasing a future remake of some sort?

If you look in the background of the image above you’ll notice a punching bag. You’ll also appreciate the individual in question is a man wearing green. Chris? Is that you, ya boulder-punchin’ hunk!