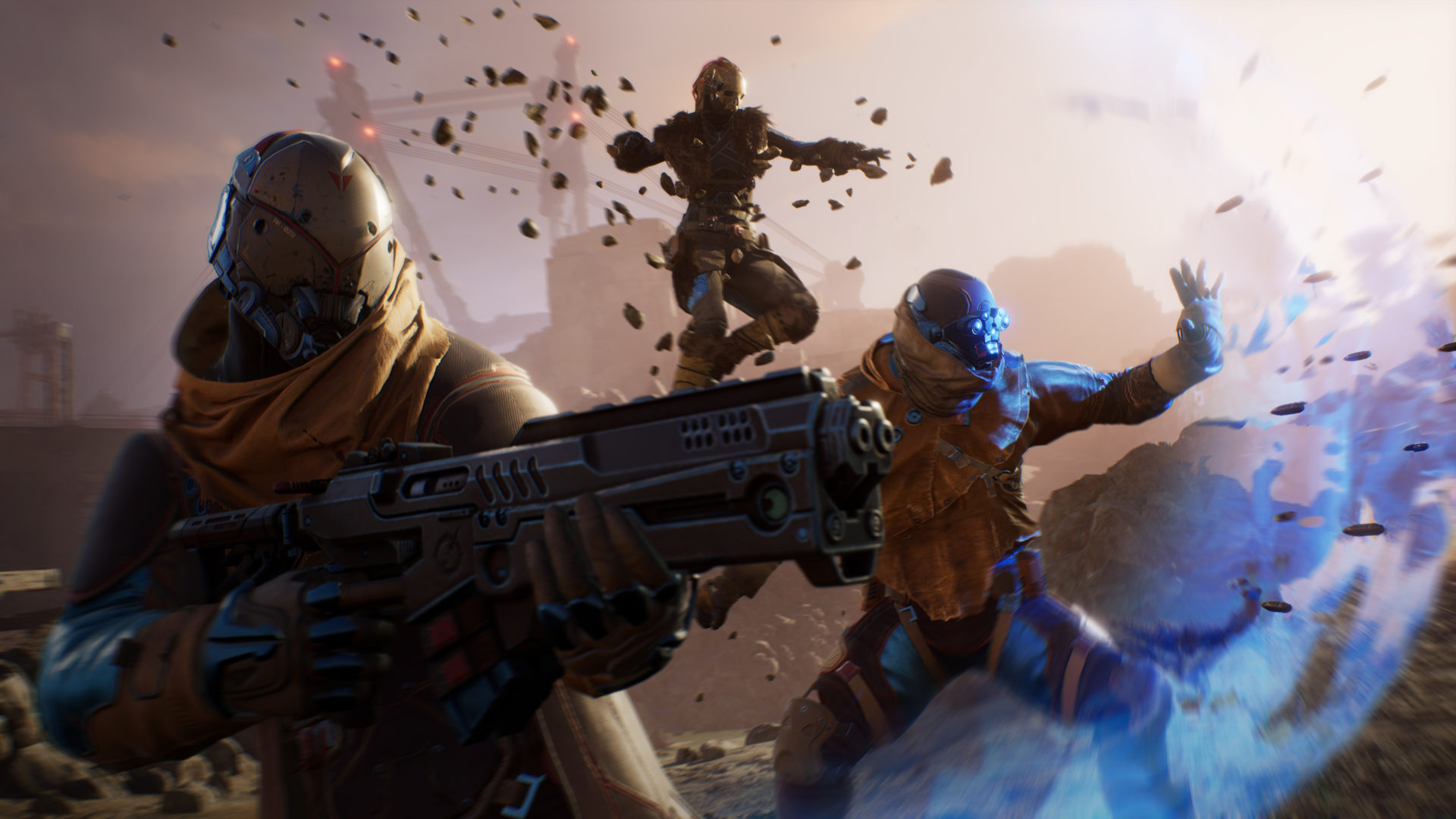 After its initial announcement at E3 2019, the writers here at Twinfinite have been intrigued about Outriders — myself and our editor-in-chief Ed McGlone doubly so once we learned it was going to have some looter-shooter vibes. Fortunately, our turn to get some hands-on time with Outriders came to fruition at PAX East 2020. On top of that, we were fortunate enough to have lead writer Joshua Rubin answer a few of our questions as well.

Outriders, at its core, is a story-centric looter shooter that supports drop-in drop-out coop throughout the entire 40-hour campaign.

The demo started at the very beginning of the game where I was treated to a rather robust character creator. I was able to tweak granular details and shape with great detail how I wanted my character to look.

I was then faced with a choice between three different character classes, the Pyromancer, Trickster, and Devastator. All of these classes offer different tactical and ultimate abilities. I settled on the Trickster which focuses primarily on battlefield manipulation by slowing enemies and bullets down as if I was a character from The Matrix.

After choosing my class I was thrust into the world of Outriders, which starts out on a desolate and destroyed World War I inspired battlefield.

Looking around the environment I noticed an incredible amount of density in both scenic detail and foliage sprouted around the battlefield. I wasn’t able to admire the scenery for too long before a large wave of enemies came bursting through the dilapidated trenches.

Here is where I got my first taste of combat. Sure, there is plenty of shooting behind waist-high walls like your typical cover shooter, but the real bread and butter comes from your class abilities.

As I zig-zagged from cover to cover I got in close on a group of enemies and used my ability “Temporal Blade” to slice the entire group in half accompanied with an animation of all the enemies skin slowly disintegrating and their skeletal corpses exploding in a bright blue fire.

I was able to mix this ability in with blasts from a shotgun while it was off cooldown and in a short time was able to create a formidable up close fighter.

Every combination of playstyle I tried to test out –whether that was no guns, no abilities, or a combination of both– all felt fun to use and viable (at least in this limited demo). I found this to be refreshing a lot of similar games either focus more on either shooting with abilities their to compliment the shooting or vice versa. Games like Mass Effect were able to find the balance, and Outriders may be on that path.

When I probed lead writer Joshua Rubin about how Outriders will stand out from games of a similar ilk, he stated:

There’s so much variety in play style whether it’s cover or getting right to the center of it. Whether it’s power or guns or whatever mix of that, you decide. You could never shoot a gun the entire time and only use your powers if you choose. As you get further all of the powers have mods that get really wonky. Two Tricksters could have incredibly different builds.

Outrider’s focus on allowing players to dial in on their play style extensively will be its biggest asset in standing among the games already well-established in the genre.

This, of course, is just one facet of the game’s customization. Rubin also told us about the personalization of your very own Outrider’s truck.

There’s another cool level of loot which is even beyond what you can put on your person, you can deck out your truck. With your Outrider truck, you can put like the head of some giant monster or skull on the front. As you go on this journey across this unknown planet with your friends, your trucks all go in a caravan. When you circle up at camps you’ll be able to see all of your friend’s trucks and where they been and what they’ve done.

As I worked my way through the trenches of enemies I finally made it back to a small town that was held together with rusty pipes that were barely stitched together.

This is where I noticed an abundance of side quests that I could have taken on if I had more time. For the demo we just picked back up on the main quest and moved on. Clearing out more groups of enemies as I pushed my way to what would be the climax of the demo, I made my way up a crumbling building and was met with a half-man/half-mutant monster to destroy.

This boss challenged me to use my full tool kit. It used powerful lightning attacks that forced me to bounce around a rooftop and squeeze in shots when I could. Eventually, after a few attempts, I learned the patterns of the fight and came out on top by using a mix of different tactics. After defeating it a notice popped up on my screen that said “World Tier Five.”

I asked Senior Narrative Director Szymon Barchan what that meant:

We have this world tier difficulty. So if you’re more of a hardcore player you can change the difficulty level and the rewards will be better.

Reminiscent of something like Torment levels in Diablo, this system scales to make sure the game is doing is providing you with a challenge without being overwhelming. Of course, you can ratchet up the difficulty if you want to challenge yourself and reap the rewards.

Outriders will release this holiday for PlayStation 4, Xbox One, PC, Xbox Series X, and PlayStation 5.

If you’re looking to see some gameplay or learn more about the World of Outriders, we’ve got you covered.