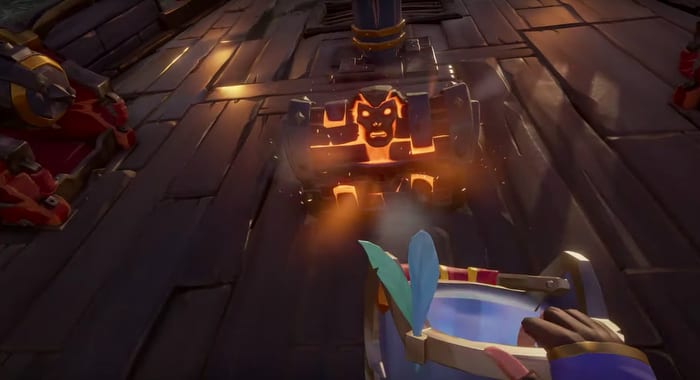 Sea of Thieves’ Crews of Rage update is live, and Rare has released a new launch video detailing everything players can expect to see from it.

Streamed via the official Sea of Thieves YouTube channel, the video details some of the new features and activities the update offers. On the new content front, players can find new bounties from Duke which will send them out in search of new bounty targets and the Chest of Rage, which burns with the anger of dead pirates’ souls trapped within.

Sea of Thieves players will need to keep the chest cool as they transport it to the highest bidder, dropping it in the sea or dousing it in water with a bucket. If they don’t, the chest will let out an explosive wave of flame, burning ship and crew members alike to ash.

There’s also a new opportunity for challenge and adventure through the Molten Sands Fortress. Ashen Skeletons have gathered there for an unknown purpose, and it’s up to players to stop them and plunder their fortress for everything it’s worth.

Players can likewise now find Sea of Thieves’ final five Ashen Tomes, which will grant them the ability to deck their ship out with special Ashen Cosmetics.

Speaking of which: There are a slew of new cosmetics for players to unlock or purchase from the Black Market. Some, like the Deep Ocean Crawler cosmetics, give players and their crew a style perfect for flexing on others in multiplayer.

Others, like the Reaper’s Heart cosmetics, grant players a more fiendish vibe to their appearance and weapons, and even grant their pets an air of dark magic given form.

Should Sea of Thieves players want something less scary to dress their pets up in though, they can find a slew of new pet outfits available as well.

Then, there’s the option to change one’s character appearance. Through the use of a Pirate Appearance potion for sale from the game’s shops, players can alter their appearance as they see fit. Their character will still have all of their gear and money after the change too, so it doesn’t carry any consequences other than the cost of the potion.

It’s a hefty bit of new content, and Sea of Thieves fans will want to watch the full video below to get a better idea of everything now available in the game.

Sea of Thieves is currently available on PC and Xbox One. For more on the game, check out our coverage of last month’s Legends of the Sea update, which added just as much new content.