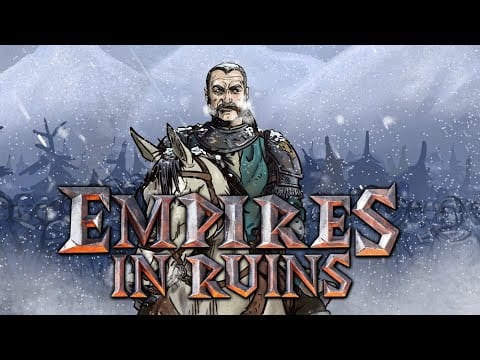 Some people can juggle multiple games at the same time, but I’ve personally always found it a bit of a battle. Playing two games simultaneously for review/preview, then, isn’t typically my idea of a good time. But in the case of Warcraft 3: Reforged and Empires in Ruins, it’s all worked out swimmingly.

That’s because as much as I’ve enjoyed replaying Blizzard’s iconic RTS, I’ll confess that my nostalgia for the tower defense (TD) genre that its custom map editor kickstarted many years ago has been overbearing. Luckily for me, Empires in Ruins just happens to be a story-driven TD game, which not only satiates my appetite for crushing waves of creeps but also incorporates 4X strategy mechanics.

It becomes obvious to me during my first few hours with the game that while Warcraft 3’s lineage is evident in its TD battle system, Empires in Ruins is far more than a glorified iteration of a mod. The fusion of story, TD, and 4X makes it an entirely different beast — a deep and multifaceted strategy experience that demands all of your concentration during its initial hours.

I already knew this in part; Empires in Ruins caught my attention at last year’s EGX Rezzed for its unique blend of strategy sub-genres, and for its weaving in of a story-driven campaign made especially engaging thanks to pithy and humorous writing. But that early build of the game didn’t feature the 4X component that this Early Access version does, and I didn’t realize quite how dramatically it would expand the scope of what is very much a grand strategy experience.

Empires in Ruins’ opening hour tees up its story premise, which sees a disheveled and borderline alcoholic military commander despatched to crush a rebellion in the gloomy Western Marches. This is conveyed by way of both comic-book-esque cutscenes and dialog sequences overlaid on the overworld map.

Limited by studio size and budget, the quality presentation is simple, but developer Hammers & Ravens has really made the most of what it’s been able to afford. The art-style is interesting, the general aesthetic is authentically medieval, and both the voice-acting and sound design is actually very impressive — Doug Cockle (Geralt, The Witcher series) plays the game’s main protagonist, Hans Heimer, and a very compelling folk/rock OST really adds an ambiance that raises the bar further.

With the narrative having been nicely teed up, you’re more or less given carte blanche to retake the continent in any order you choose. Plotting each turn-based move from the world map, you’re tasked with managing each retaken province’s resource output as you seek to expand your conquest.

There’s quite a bit to get your head around, and Empires in Ruins definitely lays it on fairly thick and fast. It took me a bit of time fiddling around and reading every menu synopsis to fully understand my options. Not helping my cause is a UI that doesn’t exactly pop from the screen. As in, it’s not entirely clear which tabs and buttons are actually interactive.

There are tutorials to help get you up to speed, of course, many of which are weaved into witty dialog exchanges between commanders. These do a good job of making entertaining what might otherwise be detail-heavy explanations, though I could have done with some additional help along the way just to make things crystal clear. Maybe, too, just to signal that many of the nuances of what is a very robust 4X system aren’t necessarily vital to know right off the bat. I find myself getting a bit lost in the weeds.

Breaking up the wider picture of your campaign to retake the Western Marches are the real-time TD battles. Now, using defensive towers to retake fallen provinces might sound a bit bizarre as a military strategy, but as a combat system for a video game, I can confirm it’s damn good fun.

Particularly so, because Empires in Ruins’ 17 upgradable towers and variety of map design keep things interesting throughout the 10 or so hours I’ve put into the game thus far. Sure, the 2D graphics aren’t as stimulating as other examples in the genre, but the core gameplay loop is very solid and every bit entertaining.

Adding further depth to the design is the way in which the turn-based and real-time components of the game compliment each other. Each retaken province provides you with more resources to fund your military campaign, and each settlement within a given province provides new opportunities to build useful facilities to better achieve that goal.

Overseen by assigned governors and squeezed for taxes according to your direct supervision, your accumulated wealth can be put towards researching new technologies, training troops, and unlocking new towers to use in real-time combat.

I really enjoy the synergy between all of these disparate features, and it definitely gives you a reason to keep charging forward in addition to absorbing the story.

Not that you want to rush too brashly through each turn; the threat of losing a province to riot always looms in the background, either as a result of your greedy taxation policies, a lack of providing enough sustenance, or the populace’s thirst for grog. While there’s enough leeway to make it forgiving for newcomers, you do need to make sure you’re calculating ahead when making decisions.

All in all, Empires in Ruins’ Early Access build shows a lot of promise and I’m looking forward to extra layers of polish being added to the experience as community feedback pours in. A roadmap of updates over on the game’s Steam page looks set to address some of the concerns I’ve mentioned here, so hopefully, the team is able to stick to that schedule.

But with the entire campaign playable, a robust TD battle system already in place, as well as both a sandbox and arcade mode already available it’s already easy to recommend Empires in Ruins for anybody that’s interested in a unique strategy experience.

Empires in Ruins released in Steam Early Access earlier this week for PC.