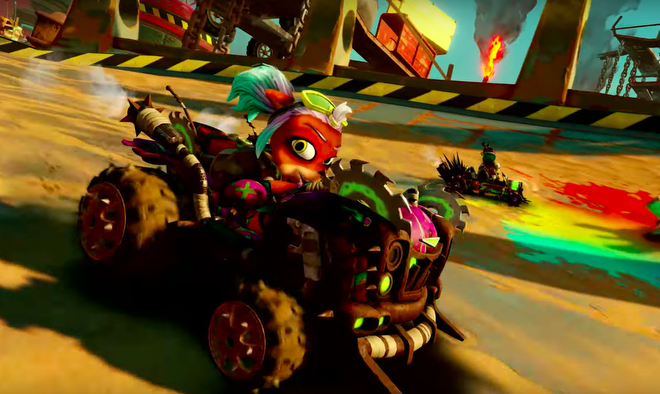 Crash Team Racing Nitro-Fueled kicks off its first Grand Prix of 2020 tomorrow, and Activision has released a new trailer to tease the event’s motif.

Streamed on the official Crash Bandicoot YouTube channel on Jan. 15, the trailer provides a brief preview of the track and character skins that will be available during the Rustland Grand Prix. However, it won’t take long for Mad Max fans to notice what the core inspiration for the event is.

The trailer starts off with panning shots of a desert wasteland. Ruins of buildings and structures can be seen in the background, while ram-shackled industrial pipes below out smoke and smog into the sky.

The phrase “What a lovely day for a Grand Prix” then appears on the screen, and the trailer quickly moves onto shots of the Crash Team Racing Nitro-Fueled racers in gritty, apocalyptic wear.

Some sport goggles and padded gear over mangy fur; others shred on electric guitars as their vehicles tear through sandy terrain; and yet others have blotches of spray paint on their bodies, gear and, yes, even their mouths.

Each character’s karts are likewise on the grittier side, with rust and splotches of spray paint in random arrangements over their bodies. They also appearing tailor-made to rip apart anything they come into contact with, as everything from spikes and plow attachments are cobbled together and added onto them.

It’s a decent little teaser of what players can expect, and Mad Max fans in particular will want to view the full trailer below to catch all of the nods to the most recent film.

Crash Team Racing Nitro-Fueled’s Rustland Grand Prix is set to kick off Jan. 16 and run until Feb. 16 on PlayStation 4, Xbox One and the Nintendo Switch. For more on the game, check out our full review of the game from its launch last year.