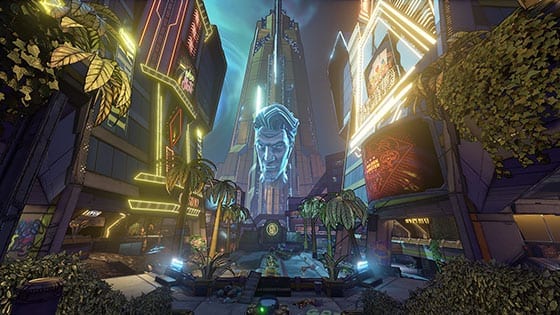 In continuing with Borderlands 3’s helpful determination to give you the right tools for any job, the DLC has added several legendary weapons and this one is no different, Here is How to Get the AutoAime Legendary Sniper Rifle in Moxxi’s Heist of the Handsome Jackpot including stats and perks. [POSSIBLE SPOILERS AHEAD]

Being a boss weapon, the AutoAime drops from Freddy (yes, the same Freddy) who is/was helping you. This fight takes place not long after the Fabricator fight, as part of the mission All Bets off, which will lead you to the end of the DLC. This fight isn’t missable, but it’s possible it won’t drop on first kill. As this is his fight area, you can exit and load back in to be respawned nearby and take another go at him.

As you can see, thinking of the AutoAime is just another sniper rifle, it’s really good, especially adding in the Dahl manufacturer ability of a fire selector.

That’s not where the AutoAime stops. It lives up the Auto Aim name it plays off of. Aiming at an enemy, not even directly but enough so their name card and HP bar show up will make bullets seek to that enemy. The AutoAime because very useful for shooting while moving, something not normally said of any other sniper rifle.

This gun isn’t perfect, and at the wrong range the bullets will curve around the enemy, missing them completely, but if your problem is a moving target in the distance, there isn’t a better weapon to be found.

That’s all you need to know for this guide on How to Get the AutoAime Legendary Sniper Rifle in Moxxi’s Heist of the Handsome Jackpot.

For more guides on legendary weapons, both in the main game and DLC, take a look at Twinfinite’s Borderlands 3 Guide Wiki.