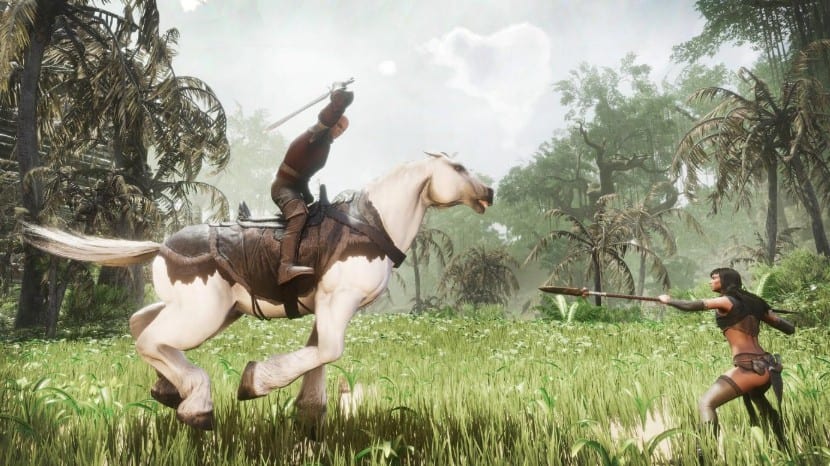 Before getting into the mounted features, they actually showcased more changes coming to the game.

Dodging is going to be changed so that the speed of rolling and the will depend on your agility and the armor you’re wearing.

You’ll also be able to act almost immediately after dodging. Heavy armor should become more useful in PvP and will let you dodge roll regardless of your agility score.

The developers are also adding acceleration to movement. Your character won’t immediately start walking at maximum speed as soon as you press the button.

Weapons will also be tweaked in order to rebalance them.

Another change is coming to trebuchets. Maximum range will be increased considerably and firing angle will be added as a control.

Boulders will be able to ho through God bubbles, and the same will go for other projectiles like arrows and orbs.

Moving on to horses, you acquire them in a similar time to other animals, but you have to use stable instead of an animal pen. You can build a stable at level 20.

Foals can be found in different areas of the game. All horses are the same in terms of stats (before leveling), but they have different colors. The upcoming leveling system applies to them as well.

Strength and Accuracy provide your horse with extra bonuses related to your mounted combat damage with melee and ranged weapons.

At level 20 you can also unlock the Novice Saddlemaker feat that lets you create saddles with different stats and progression.

They can trot and gallop, and controls are similar to your usual movement. Galloping costs stamina pretty much in the same way as your character.

It’s possible to dismount players from horses, and they can jump and swim. They can also prance and walk for RP purposes.

When you’re not riding your horse, it can follow you like a regular pet. Horses earn experience not only when you fight around them, but also when you ride them. You’ll be able to level your horse to the level cap (20) in four to six hours.

If your character is encumbered, the horse will be slowed down as well. That being said, whatever it carries in its own inventory won’t count toward encumbrance.

Not all weapons can be used on horseback. Daggers are completely useless.

Axe, Swords, Maces, Spears, Lances, and Bows can be used in mounted combat. Lances are, of course, a new addition to the game.

With one-handed weapons and spears, you can hold attacks to prep them and aim your swings. Light attacks are intended for hit and run, while heavy attacks require more precision in aiming.

Lances are only usable on horses. You just aim it and gallop. Everything impacted by the lance will receive damage.

Lances deal damage depending on relative velocity, so two opponents charging toward each other will deal devastating blows on direct hits. They also have a higher chance to dismount the opponent.

Torches are usable in the off hand, but shields aren’t. That being said, they’ll be probably added in the future.

Bows can only be used in a 180-degree angle on the left side of the horse. You won’t be able to fire to the right.

Speaking of bows, they have been changed and arrows will hit exactly where you’re aiming them, even while on foot.

Mounts will come with the next large update, which is planned for “early” December.

Another large update is going to come in the first half of next year, but we don’t yet know what it’ll entail.

Conan Exiles is currently available for PS4, Xbox One, and PC.