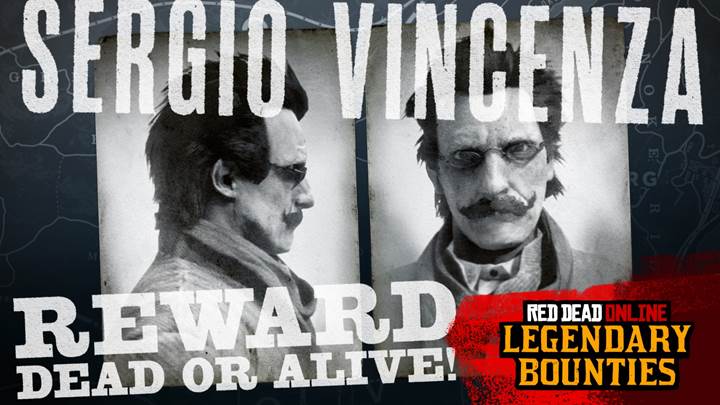 “Since defecting from the military, Vincenza has been on the run and his accuracy with a rifle has passed into the stuff of legends. The glint of sunshine reflecting off his scope is said to be a grim harbinger and an omen of death.

“His last major operation was a botched assassination attempt on the Governor of Saint Denis, and he is rumored to be holed up in the fire tower at Roanoke Ridge. But beware: Vincenza’s men are highly-trained ex-military who are said to have rigged the hills with traps and explosives. Approach with considerable caution.”

Licensed Bounty Hunters can take on Vincenza and his anarchist gang by picking up his poster at any local sheriff’s office.

Moving on, Madam Nazar is on the lookout for the Naturalists Collection containing the Cherrywood Comb, Egret Egg and Bitterweed, with a handsome payout for any Collector who delivers all three this week.

A Halloween mask is also redeemable for those who login to GTA Online between Oct. 10 to Dec. 12.

Elsewhere, this week’s Free Aim series is called Name Your Weapon, a tense survival match in which the more difficult the weapon you use to fell your opponent, the more points you earn.

Rockstar also reminds players that a discount on the Bounter Hunter’s license is in effect until Oct. 14. Search out the Legendary Bounty Hunter, Cripps or Madam Nazar this week to take advantage. Alternatively, connecting your Social Club account with Twitch Prime will see you recieve it for free.

Finally, other events that net rewards in Red Dead Online this week include:

Red Dead Online has improved in a big way after the launch of Frontier Pursuits. You can read more about our impressions here.