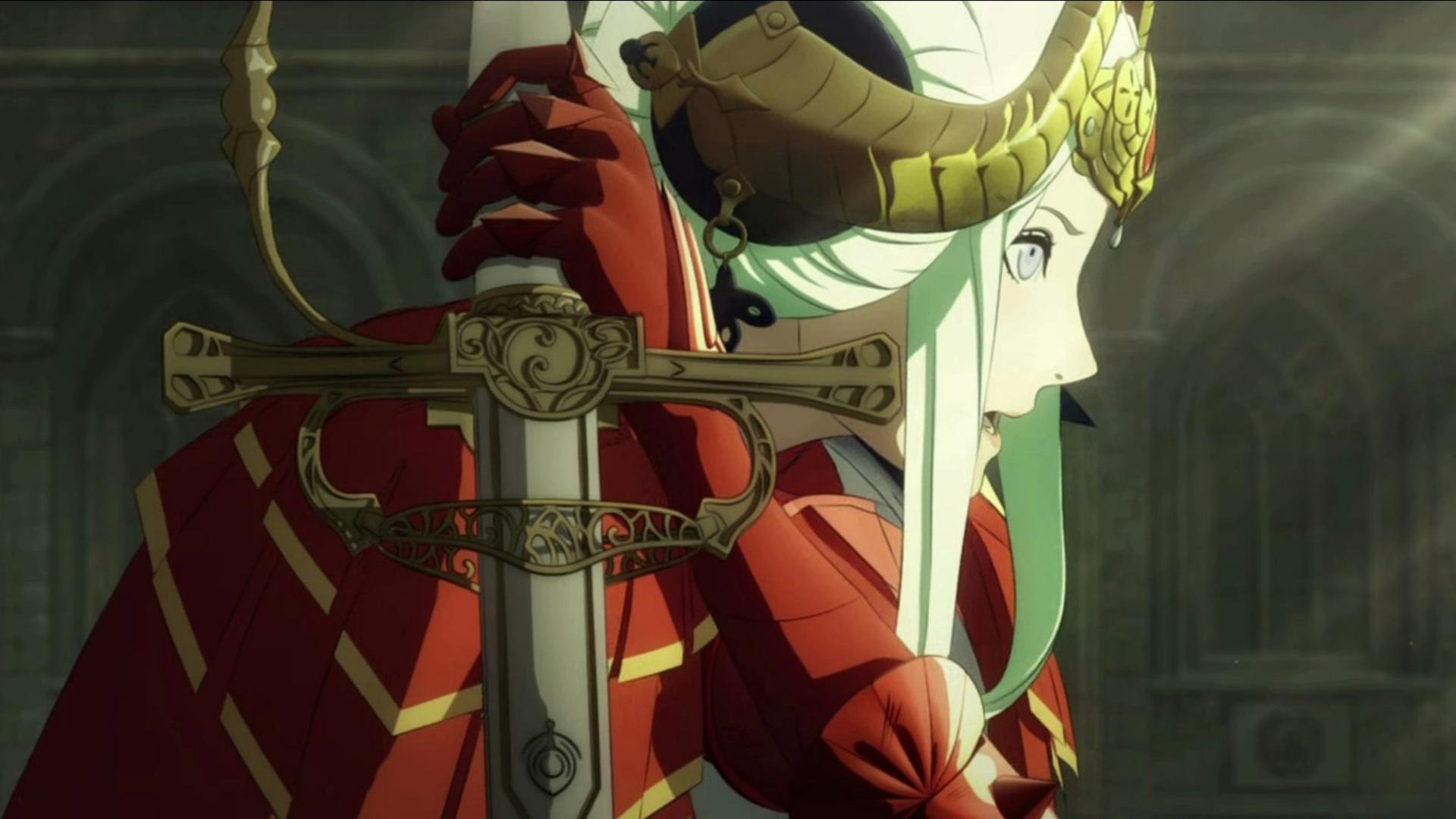 [Endless Playlist is a series of monthly articles where we pick a video game soundtrack for discussion and try to provide a critical analysis of how it performs within the game it’s from, and how it holds up on its own. This month, we’re breaking down Fire Emblem: Three Houses’ soundtrack.]

At the time of writing, it’s been almost two months since I last played Fire Emblem: Three Houses.

I’d finally put the game down about halfway through my second playthrough after burning out from playing it excessively on a daily basis for an extended period of time for our official review.

Despite having not touched the game in a good while, though, Three Houses’ soundtrack has proven to be memorable and striking enough to stay in my regular music shuffle.

More specifically, it’s the game’s main theme that’s made such an impression, along with all the variations of it that pop up throughout the soundtrack.

I’ve listened to the sound selection a fair number of times at this point, and it became increasingly clear that everything comes back to that main theme.

We already know that it’s critical for long video game soundtracks to have a strong theme that the rest of the tracks can be built around, but it’s also important for that theme to be versatile enough that it can fit various different moods within the game itself.

It’s worth mentioning that Fire Emblem: Three Houses’ sound selection isn’t actually that big, weighing in at only 33 tracks, not including all of the other extra tracks you get in the in-game sound gallery.

Still, those 33 tracks are more than enough to give you a good sense of the game’s tone, and you’ll only need to listen to like, half of this collection to know what the main motifs are.

The first track, aptly titled Fire Emblem: Three Houses Main Theme is actually not, in fact, the very first track you hear in the game. That would be The Edge of Dawn (Seasons of Warfare), the vocalized version of the Main Theme that sets the tone for the rest of the game.

Lyrically, it’s not the most nuanced or complex song you’ll ever hear in video games, and that’s because it feels like the lyrics were added in to fit the melody itself.

Still, for a song that’s meant to accompany an epic anime opening that introduces the whole cast of characters, it’s sufficiently hype-worthy and does its job of getting players ready to jump into the game.

Like most other anime openings in video games, with Tales of Xillia and Zestiria being some of the best (every Tales opening is incredible, really), Three Houses’ song and opening are meant to introduce the cast, the story, and give you an idea of how dark the narrative’s going to be.

In contrast to The Edge of Dawn, the Main Theme is considerably darker and more sinister, and that’s made obvious by the opening seconds. The track opens with ominous, distorted chanting that alludes to the heavier themes of the story.

It’s not long before the chanting gives way to the soaring main motif though, before closing out with a final sung verse from The Edge of Dawn.

Appropriately enough, if there was one track that could perfectly encapsulate the ideas and narrative threads of Fire Emblem: Three Houses, it would be the Main Theme.

From the sinister opening with the organ that alludes to the darkness of the Goddess of Fodlan, to the beautifully optimistic orchestral chorus that embodies Byleth’s attachment to the students of the Academy, and the closer with that verse from The Edge of Dawn to wrap everything up, this track is Three Houses condensed into fine musical form.

Listening to it from start to finish, the shift from the ominous tones to optimism is a subtle and gradual one as well.

The repetition of the chords in the main motif helps to mask that shift, and despite the beginning and end of the track sounding so different from each other, you don’t feel like the changes are jarring, and it works.

For a track that weighs in at only two minutes and seven seconds, it remarkably achieves a whole ton within that short span of time, making it arguably the strongest and most memorable track of the entire collection.

Speaking of the main motif, it’s comprised mostly of major chords that help give it that uplifting and optimistic feel.

It’s also a pretty repetitive string that builds quickly over a short period of time, which is why it’s so catchy. This is best exemplified in the second-best track in Fire Emblem: Three Houses, Fodlan Winds.

Even if you don’t know the track by name, you probably already know which one I’m talking about because you hear it so damn often in the first half of the game. I am, of course, talking about the main combat theme.

You hear hints of the Main Theme in the beginning of the track, and it’s instantly recognizable because of the repeating chords, but it’s not till the midpoint that it kicks in fully.

The chorus in Fodlan Winds actually isn’t a 1:1 replication of the main motif itself, with a couple of different chords here and there. But the repetition and build-up help to make it feel familiar so that you’re able to hum along to it naturally even if it’s the first time you’ve heard the track.

Indeed, the repeating chords are what make Three Houses’ soundtrack so darn infectious. By repeating the same few major chords, it inevitably creates a loop in our brains as we listen to it, making it an incredibly catchy tune that you won’t be able to stop humming.

That repetition is present in so many of the tracks here, making it so that you can’t help but bop along a little even with the tracks that aren’t that great.

And then, in the tracks that are great, it’s hard not to feel an appreciation for just how well-done that Main Theme and main motif are.

This is clearest in the track The Promise, where the motif is essentially just repeated over two minutes at a slightly slower pace, and with new instruments.

The Promise plays right before the big ball that takes place in the Monastery, and during key moments in the story where Byleth is seen bonding with her students.

It’s here where it becomes clear that the main motif is meant to symbolize the strength of the ties and bonds between the professor and the students.

It’s only now when I’ve listened to Three Houses’ soundtrack in its entirety that I’ve begun to appreciate just how versatile and effective the Main Theme is.

Almost every track comes back to it in some form or another, and it’s always used in different ways to convey different messages and emotions to suit the needs of the story.

It’s also why the tracks that make the most effective use of it are also the best ones in the collection. While there isn’t really a bad track in Fire Emblem: Three Houses per se, it’s pretty easy to parse out the good ones from the really excellent ones that are on another level.

Fodlan Winds, The Promise, Unfulfilled, and Between Heaven and Earth are the cream of the crop, with that final track perfectly incorporating those repeating chords amidst a tense symphony of orchestral clashes that play during the game’s highest stakes battle.

Fire Emblem: Three Houses also features one of the most dramatic soundtracks I’ve heard in a long time, and I mean that in the best, most complimentary way possible.

Perhaps it’s thanks to the way the main motif is structured –with the chords building on each other in this climbing, soaring manner every step of the way– but most of the pieces in this soundtrack feature a crying violin or cello that really helps to create this feeling of intensity.

It’s the kind of game that makes players go crazy over their favorite characters, which is why you’ll find no shortage of beautiful fan art of Byleth chilling out with students from the different Houses, and proud proclamations from fans that they’d literally die for Sylvain and Felix.

You can’t stop yourself from being drawn into the drama of the story and that characters’ lives. You just can’t help it. The characters and the music will see to that.

Fire Emblem: Three Houses’ soundtrack is truly a thing of beauty. It’s a luxurious tapestry that weaves itself around a main core that seeps into every aspect of the game, from the battles to the story and characters, and everything in between.

Just listening to the full version of The Edge of Dawn fills me with this overwhelming sense of pride and makes me want to boot the game up on my Switch right now to be reunited with my precious Black Eagles.

I literally want to tell my students to reach for my hand, anime style, despite the fact that my heart has been blackened, scorched by flames, a force I can’t run from… and by “I,” I mean Byleth obviously.

When a video game soundtrack has that kind of an impact on you, it becomes pretty damn hard to deny its charm. I guess I’ll play Fire Emblem: Three Houses forever now.