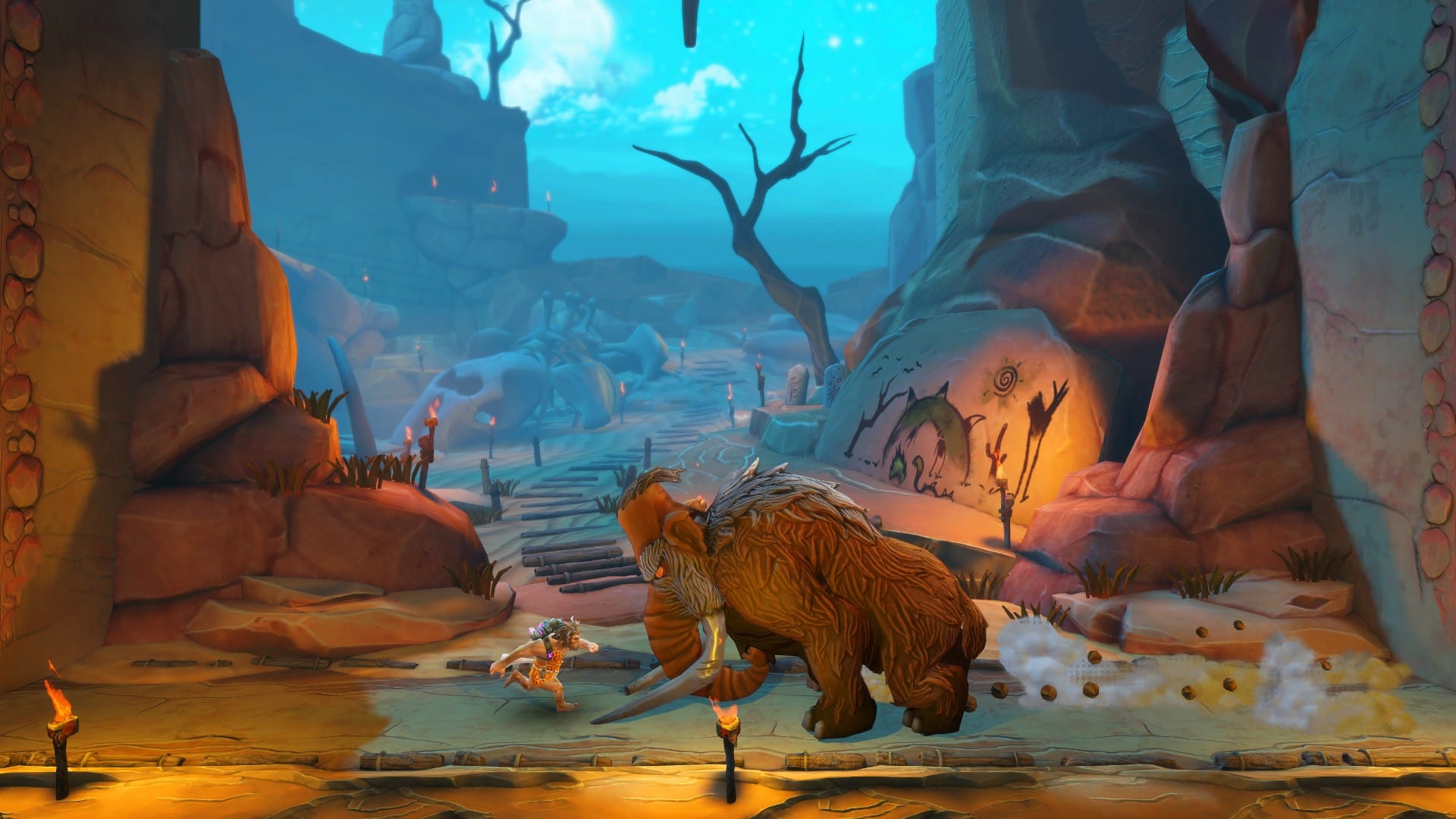 Anytime a game comes around that takes a lot of inspiration from the Donkey Kong series it usually grabs my attention immediately. Alongside being the first platformer I’ve ever played, the action-packed, rhythmic gameplay of Donkey Kong 64 still holds up today, cementing its place as one of my favorite games of all time.

Based on looks alone, Jet Kave Adventure certainly feels a lot like the old school platformer does at first glance but can it measure up where it counts?

Coined as a “stone-fiction” game by its Polish developer 7Levels, Jet Kave Adventure tells the story of a caveman, Kave, that stumbles upon an alien jetpack.

The premise alone of what a caveman would do upon meeting aliens is interesting enough but giving him a jetpack and having him fly around levels is my type of weird.

With the jetpack serving as a focal point, the game scrolls from side to side, placing prehistoric obstacles in Kave’s path. To overcome them, he must boost to new heights, using the environment alongside the alien technology to progress throughout each level.

Like any platformer, whenever the game decides to focus on the fluidity of these mechanics, it truly shines.

Boosting over a gap to a bamboo stick, swinging off of it, and then bouncing off a springy flower onto a safe patch of ground is a blast. Couple in some random enemies here and there and there are some sequences that feel really delightful.

Unfortunately, Jet Kave Adventure isn’t really all that fluid throughout. While there are some set-pieces where Kave bounces around and beats down enemies rhythmically, most levels don’t flow that quickly.

Instead of the chaotic motion of a platformer like Rayman, the game usually reuses the same open environments and obstacles.

While scenery may change, featuring gorgeous backdrops as they do, you’ll rarely have to time a jump or combine abilities that merit much in the way of skill.

That isn’t to say that the game doesn’t try to provide some form of respite, adding in boss fights, chase scenes, and even flying sections.

Each of these falls pretty flat, as controls and strategies are either frustrating or lacking in any variety.

Regardless of the background or the animal chasing Kave, each instance features the same repetitive sequences, usually suffering from input lag or hitbox issues to go along with the repetition.

This statement rings true for the enemies as well. While they may feature slightly different looks or attacks, just about every enemy in the game is a one-hit kill.

Combat in general in Jet Kave Adventure is pretty frustrating, especially when it is the focus.

Whether Kave is facing a swarm of enemies or one of the boss fights, combat-focused encounters are always contained to a small area.

Limiting the verticality and maneuverability of a platformer is always off-putting, a statement that rings even truer when the combat isn’t satisfying or diverse.

Luckily, Jet Kave Adventure isn’t too long in the sabertooth, as it only features 36 levels, each of which can be beaten in about three to nine minutes.

Though time trial elements are incorporated in each level to try and add in a bit of incentive for speedrunning and replayability, they don’t change anything.

Upgrades also don’t add anything to the game, as none of them are required to beat the game, they just make some easy parts even easier to cheese.

When it comes down to it, Jet Kave Adventure is by no means a bad game, it’s just a bit of a bland one.

While moment to moment gameplay can be fun, the overall process is just too repetitive for a genre that already has so many unique and innovative games in it.

Should You Buy Jet Kave Adventure?

If you’re looking for a quick, cheap platformer on the Nintendo Switch, you’ll certainly find worse choices than Jet Kave Adventure. Moment to moment gameplay can be fun and reminiscent of titles like Donkey Kong.

Jet Kave Adventure is out now on Nintendo Switch.

A Polish indie dev created in 2014, 7Levels is a studio with three games in total now under their belt.