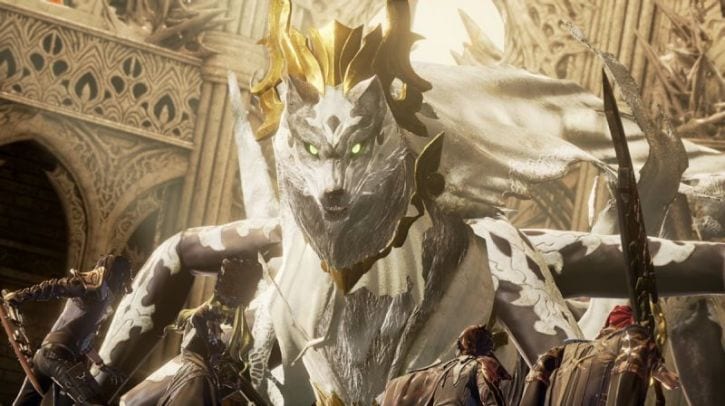 How to Beat Successor of the Ribcage in Code Vein

Before we jump into our walkthrough for the boss we should note, you actually have to fight Successor of the Ribcage twice in a row. After you beat it the first time the boss will regenerate in a cutscene, and its attacks will get faster and more intense.

The good news, however, is that the boss regenerating stays across your death. This means if you die in the second battle you won’t have to go and do the first battle over, you just need to beat it one more time again.

The Successor of the Ribcage is a mostly stationary boss in Code Vein that doesn’t cause any status effects, but uses multiple elemental attacks. Because of this, equip a Blood Veil that boosts your resistance to fire, ice, or lightning, or all three.

Go with a build that uses melee weapons as the Successor is pretty weak to weapon damage, but you’ll have a hard time with ranged elemental attacks.

Do not choose Mia as a partner, as the boss can literally kill her in one attack due to her low endurance. Instead, go with either Louis or Yakumo, as both can buff you and cause good damage.

Past all that, you can pretty much go with whatever Blood Code and build you want, although for our playthrough we found it good to have a quick and agile character.

Successor of the Ribcage’s Attacks

Successor of the Ribcage will stay stationary for the whole battle, but it will teleport from one end of the room to the other. Now let’s go over attacks to watch out for.

Beating Successor of the Ribcage

The first battle with the Successor of the Ribcage in Code Vein isn’t too hard, but the second one will amp things up.

Use the pillars as cover to dodge the boss’ attacks, and close in on it. Like we said earlier, the boss is weak to melee attacks so get up close and launch a few before backing away when it counterattacks.

Make sure to watch out for that massive fire blast as it can really do some damage. A great option in this battle is to equip a Gift like Blow of Madness (Berserker Blood Code), to boost the damage of your next attack, and then use it with an attack Gift like Triple Annihilator.

Like with most bosses in Code Vein, don’t overstay your welcome with your attacks. Use a couple of combos then back off to get your bearings.

Use a couple of Ichor Concentrate items to make sure you can cause maximum damage whenever you close in on the boss.

You’ll generally want to keep your partner alive as they’ll draw aggro from the boss for you, so make sure to heal them if they need it.

Once the second battle starts use even more caution, but the same strategy. In this battle the boss will start using two of its attacks at once. Advance more slowly making sure to dodge, but still get in close to cause maximum damage.

Eventually, the boss will go down, and don’t be afraid to switch out your Blood Code if you find one isn’t working.

That’s everything you need to know about how to beat the Successor of the Ribcage in Code Vein.

For even more tips, tricks, and guides on Code Vein, make sure to search Twinfinite. Here are a few other guides you might want to look at in the meantime.