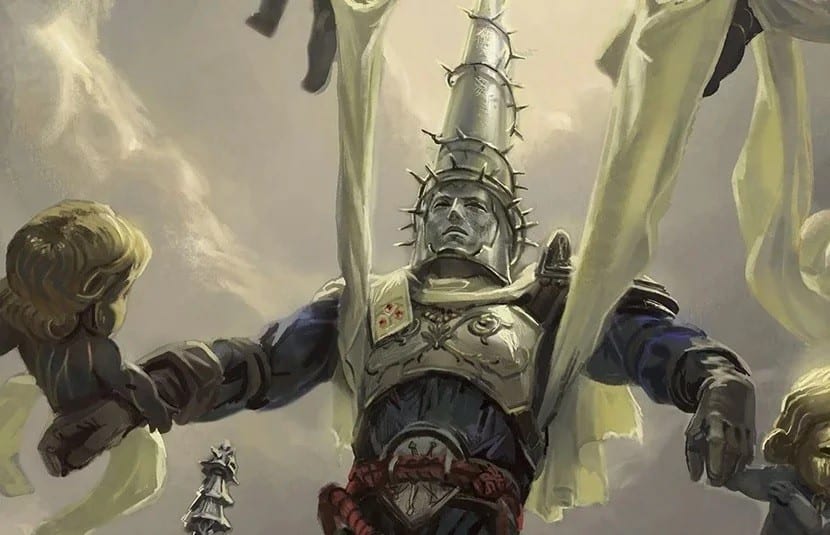 A long time ago in the fictional land of Cvstodia, an event known as the Miracle (sometimes referred to as the Grievous Miracle) occurred. This incident transformed many residents into horrific monstrosities, twisted the world into a 2D platformer, and set the stage for the game Blasphemous, an indie title that tries to mix metroidvania-styled levels with Dark Souls-ish combat. For the most part, the game succeeds.

Before I continue the review, I need to make one fact abundantly clear: Blasphemous liberally uses (and twists) religious iconography, specifically Spanish Catholicism iconography. This game uses concepts like religious zealotry and the Spanish Inquisition to set a truly grisly scene, as well as possibly criticize unscrupulous people who use religion to rationalize their greed and violence. Nobody expects the Spanish Inquisition to serve as an influential force in a game’s art department, but then again Blasphemous breaks a lot of expectations.

In Blasphemous, you take the role of The Penitent One, the last remaining member of a religious order known as the Brotherhood of the Silent Sorrow. The character believes his holy duty is to slaughter monsters as violently as possible, help innocent bystanders, and remain silent, even when he’s stabbed through the gut by a sentient painting. The Penitent One is basically a medieval Doom Slayer.

Sadly, The Penitent One doesn’t receive much else in the way of characterization since Blasphemous is so light on story. He is here to kill monsters. That’s all we get, but that’s also all we need.

Unlike other Metroidvania and Souls-like protagonists, The Penitent One only has two items to his name: a single longsword and a stash of healing flasks. Moreover, he only knows a tiny repertoire of moves, including a dodge, parry, multi-hit combo, and a visceral execution move that bestows temporary invincibility.

Players can eventually teach The Penitent One a few new moves such as a charged attack, a lunge, and magical attacks of various flavors (that use a magic meter charged by slaughtering enemies). However, this library of attacks remains limited throughout the game, which lets players experiment and change tactics whenever necessary. Players who learn every attack and spell have no more of an advantage than those who don’t.

Of course, what would a game without visceral combat be without enemies to slaughter? Blasphemous has no shortage of beautifully realized monstrosities, from bewinged baby heads to naked, bifurcated men who throw giant boomerang crosses. Each enemy can devastate unwary players —because what would a Souls-like game be without a challenge— but each monster has a tell players can, with practice, recognize and punish with bloody prejudice.

However, the true meat of Blasphemous’ combat challenge rests with the bosses. If you have played any Dark Souls or 2D Castlevania game, you know what you’re in for: walking towers of pure heresy that will stomp you into the ground if you’re not careful.

Moreover, bosses have multiple phases, so odds are good you will waste all your healing flasks on phase one and be unprepared for the unholy smack down they will unleash in phase two. But as with other Souls-like games, their attack patterns aren’t truly random, and you should eventually learn their tactics and slay them. If you’re lucky, you might even memorize their moves to a point where you can defeat a boss without getting hit once.

Blasphemous isn’t just about combat, though. Most of the game requires you to jump and climb through sprawling 2D levels that drip atmosphere almost as much as The Penitent One’s sword drips blood. The game is a masterpiece of pixel art, accentuated by a haunting and atmospheric ambient soundtrack.

Each level in Blasphemous features unique platforming challenges to make sure you never become too comfortable. One locale might require you to wade through impeding sewer waters and dodge dripping toxic bile, while another will force you to tread carefully and avoid strewn parchments, lest you agitate the restless ghosts of an underground library.

However, not everything is fine on the platforming front, as Blasphemous falls into two figurative and literal pitfalls of 2D game design: insta-kill spikes and bottomless pits. These hazards provide most of the challenge in platformers where enemies are relegated to minor speed bumps, but in Blasphemous, spikes and pits take on a whole new meaning of pain.

While some levels in Blasphemous properly use spikes and pits, most of the time they are a god-forsaken pain in the butt. While The Penitent One can climb up most ledges if he is close enough, far too many spikes are placed just under a ledge, which means you either stick the landing or turn into an ex-living pincushion. I cannot count the number of times I was sure I would make the jump only to see The Penitent One tumble into an instant death because he was one pixel off.

Bottomless pits don’t fare much better, either. For a bit of context, many levels feature wooden walls, and The Penitent One can climb them by digging his sword into them. Many bottomless pits rest below these walls, and I lost track of how many times I swung a sword into a wall only to see The Penitent One plummet to his doom in the world’s worst “add insult to injury” moment. Seriously, the hit detection with these walls needs a bit of work.

Let’s face facts: insta-kill spikes and bottomless pits just don’t mesh with the core Metroidvania game design, especially when enemies can knock you into these death traps with zero chance of recovery.

On the bright side, Blasphemous features a refreshing take on non-combat Souls-like mechanics. While slaughtered enemies reward players with Tears that serve as all-purpose XP/money, the game doesn’t confiscate Tears whenever The Penitent One meets an untimely (and inevitable) demise. Instead, the game reduces the amount of Tears enemies drop and the size of the player’s magic meter, which is fairly lenient as far as Souls-likes go.

To get rid of these penalties, players can either journey to where they died and retrieve their death marker or visit a giant statue and pay some Tears. Retrieval is usually the best option, especially if you die during a boss battle since the marker gives free health and mana. However, if you forget to save at a checkpoint, die, and resurrect at the opposite end of a map, the statue might be the more expedient option.

As for the Tears themselves, they can unlock new attacks and purchase items such as stat-boosting rosary beads and extra healing flasks. Unlike normal Souls-like and Metroidvania games, Blasphemous doesn’t feature a level-up system, so you can’t use Tears to arbitrarily boost The Penitent One’s attack strength or health, thus adding to the game’s challenge.

Then again, I encountered stretches of gameplay where I was awash in Tears and wanted to spend them on something —anything. However, I couldn’t spend my Tears because I had bought everything there was to buy at the time, and death didn’t deplete my stock. Perhaps Blasphemous’ death penalty is a little too lenient after all.

If you really want to upgrade The Penitent One, you need to wander off the beaten path and explore side passages for upgrade items such as threads that let you hold more rosary beads and giant, floating, naked women who increase your health. Yes, seriously.

Relics are the closest the game comes to true Metroidvania-style traversal upgrades, which are usually rewards for collecting and properly using quest items. While The Penitent One will never double jump, he will find a Relic that reveals invisible platforms by covering them in blood.

However, like the lack of purchasable stats, Relics are a double-edged sword because they’re downright optional. If you come across a room filled with poison gas, don’t expect to find a Relic waiting in another room later in the game that makes The Penitent One immune to gas. If you want that Relic, you need to scour the game world for a cryptic series of challenges and their associated quest items.

On a side note, many quest items and other upgrades are rewarded via puzzles that fall into three categories. Some puzzles require players to use critical thinking skills and pattern recognition; others rely on clues hidden in item descriptions, and a few fall back on the classic point and click adventure cliche of “interact with everything and see what happens.”

I would like to end my review here, but I noticed one tiny, otherwise insignificant glitch that started to grind my gears as the game went on: whenever I closed the map, The Penitent One jumped. This never happened when I closed the character menu, just the map. I cannot properly convey my frustration over this glitch.

All in all, Blasphemous is a fun game. It provides challenging enemies and platforming sections, but some challenges are less difficult and more unfair. Still, Blasphemous is a demanding experience that will make you feel rewarded for your tribulations. Just don’t play the game if you can’t stand a little religious ribbing.

Should you buy Blasphemous?

Only if you don’t mind a challenge. Most of Blasphemous is balanced and tough-yet-fair, but some sections will make you want to throw your controller at a wall. Also, the game’s decidedly Catholic villains might not sit well with religious players.

Blasphemous released on Sept. 10 for the PC, Xbox One, PlayStation 4, and Nintendo Switch.

Blasphemous is developed by The Game Kitchen, the studio behind the award-winning point and click adventure game The Last Door.