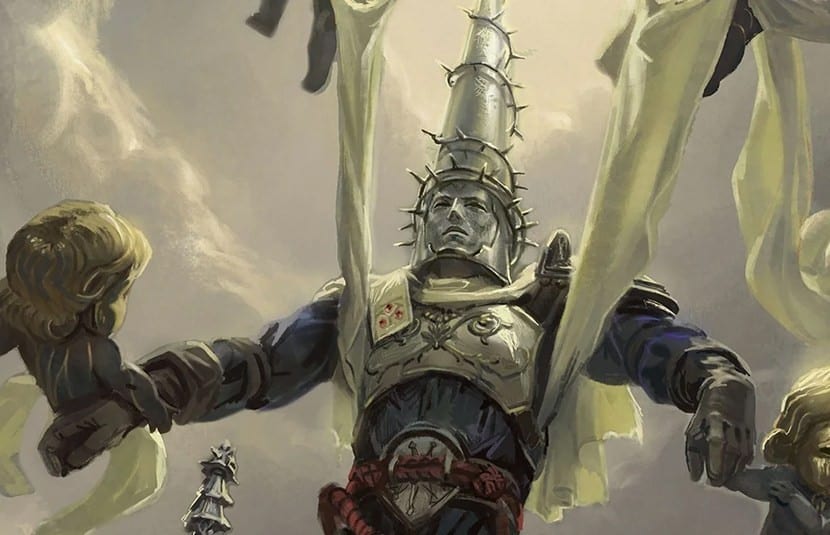 Just minutes into Blasphemous, I encountered the first boss of the game and bested him fairly easily. No problem, I thought, feeling rather pleased with myself.

And then, the game got pretty gross. I was treated to a cutscene of the protagonist, referred to as the Penitent One, cutting the boss’ body open, filling up his large, metal cone helmet with its blood, and putting it back on his head. The blood mushing with his head with a disgusting, squelching sound.

Now don’t get me wrong; there have been many games over the past decade or so that have overwhelmed players with gory, horrific imagery and the fear of the morbid unknown. Blasphemous isn’t overly gory (though it does have its moments), but coupled with the game’s religious iconography, it manages to produce some seriously disturbing and unsettling scenes that might make you wince just a little.

I’ve put in just a couple of hours into Blasphemous so far, and already I’m starting to feel a little perturbed by some of the things I’ve seen in this game. One of the earliest enemy types is a naked body split right down the middle, and it hurls a metal plate at you. It’s complete with blood dripping from its edges and all.

There are these crawler-type enemies which I’m fairly sure are just human bodies bent over backwards, crawling towards you, Suspiria-style.

And then there are these larger dudes, their bodies hidden in a giant bell. They wind up their attacks by picking up speed and hurling themselves towards you. If you dodge them in time, they hit the wall, a dull gong reverberating through the stale silence.

The finer details of Blasphemous’ story still elude me at this point. I’ve gotten tidbits about the world of Cvstodia through in-game item descriptions and cryptic dialogue from the creepy NPCs, but much of the world and even the Penitent One is still shrouded in mystery.

It’s pretty damn clear that Cvstodia is a very deeply religious land, however. Everywhere you look, there are remnants of old cathedrals that have long since decayed and crumbled, there are broken down statues of unknown saints and figures that its people used to pray to.

The area names are appropriately creepy as well, with a particularly tough early area being called Grievance Ascends. NPCs are dressed in dirty veils, the Penitent One is constantly picking up key items like unshackled vertebrae and ripped sphincters from other dead religious figures, and you’ll use rosary beads to level up your abilities as well.

Perhaps the creepiest part of Blasphemous, however, is the Penitent One himself. It certainly doesn’t help that the cone helmet already causes him to bear an eerie resemblance to Pyramid Head, but his character design is just so incredibly imposing and sinister –qualities that are only amplified by his silence.

His parry animation involves him picking up his enemies in one hand before ruthlessly stabbing them in the head repeatedly until they’re completely drained of blood.

Make no mistake; Blasphemous’ enemies are terrifying, but the Penitent One is just as, if not more, frightening than the denizens of the dark.

I didn’t know what I was signing up for before properly jumping into Blasphemous. In fact, I just thought it’d be a cool Gothic 2D Metroidvania game with Souls-like mechanics and combat. I’m actually anxious about falling deeper into the rabbit hole at this point, and even more afraid to find out just who the Penitent One really is.