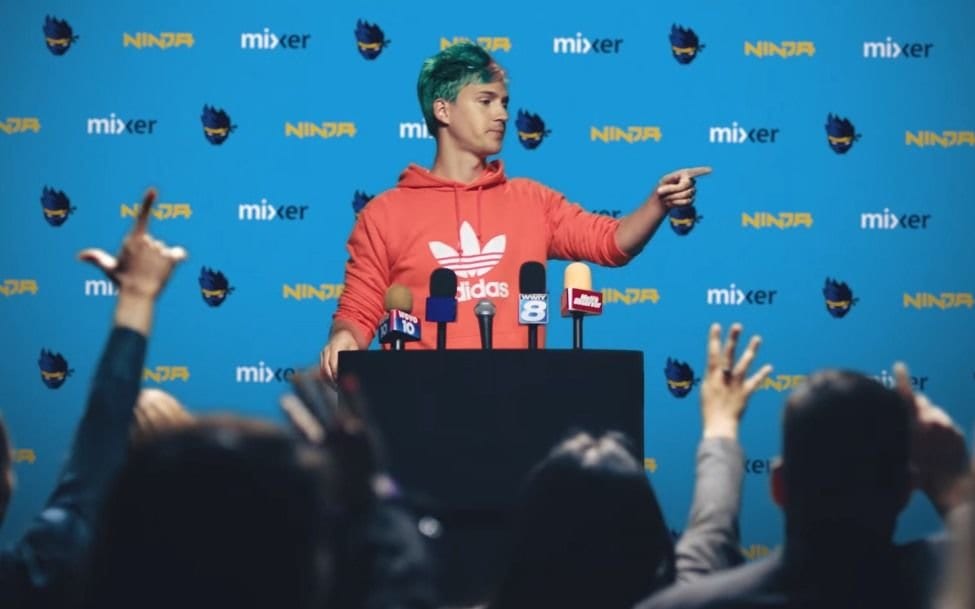 Popular streamer and professional Fortnite player, Ninja (Tyler Blevins), announced this past week via Twitter that he would no longer be streaming on the Twitch.TV platform.

In a move that shocked fans and pundits alike, Ninja signed an exclusive streaming deal with Mixer, the Microsoft owned streaming platform that launched back in 2016.

The shake-up forces Ninja to leave over 40 million followers and nearly 15,000 paid subscribers on Twitch in exchange for what we imagine to be a very lucrative partnership with Mixer, of which the details are currently unknown.

Up to this point, Mixer has been a distant memory in the minds of many. The platform never quite gained the traction that Microsoft had in mind when it launched as a competitor to rival Twitch.TV, the industry leader when it comes to streaming video games.

However, now that Ninja has made the move the Mixer, the streaming industry is seeing a major shake-up. Twitch has been the leader for the better part of a decade and has not seen any major competition.

Even YouTube, the company best suited to challenge Twitch for a share of the pie, was unable to capture the same audience that Twitch has, canceling their YouTube Gaming app late last year, although streaming services are still carrying on.

The deal to nab Ninja exclusively on Mixer has been a positive one for Microsoft so far, as Ninja’s subscribers on the platform grew to half a million in just a single day and boosted the Mixer mobile app to become #1 on the downloadable charts.

Although Twitch remains the go-to platform for streamers and content creators alike, the company has been receiving quite a bit of negative backlash over the selective application of their terms of service and apparent favoritism when it comes to their most popular streamers.

Back in June 2019 during E3, one of Twitch’s most celebrated streamers, Dr. Disrespect, decided to live-stream himself in a public bathroom during the event, which is not only against Twitch’s terms of service, but is an illegal act in the state of California. The live stream was ended prematurely and Dr. Disrespect earned himself a ban on Twitch.

However, that ban was temporary and only lasted two weeks, leaving other Twitch users to question whether or not the streaming giant was following their TOS, or giving their most valuable streamers special privileges that are not given to less popular streamers.

The misuse and grey area of Twitch’s TOS doesn’t end there either, there have been multiple cases of Twitch selectively choosing who to ban and how long a ban will last for certain people.

In most of those cases, streamers that have less of a following are subject to harsher punishment and some are often removed from the platform entirely.

These continued acts of privilege given to Twitch’s most profitable streamers has led to a negative conversation surrounding the platform.

Ninja was Twitch’s most successful streamer on the platform, outranking not only other streamers like Shroud and Summit1G, but massive corporations like Riot Games as well.

Twitch’s response to the move has been petty at best, with the company removing Ninja’s verified checkmark a mere moments after the announcement was made, and even putting a message at the top of his old page that reads, “The Ninja you are looking for is in another castle.”

If the move by Ninja turns out to be successful in transplanting viewers from one platform to the other, we may start to see other streamers who are tired of Twitch’s policies follow in his footsteps.

Currently, there are not many competitors that bring the same sort of viewership numbers or chances for revenue on their platform that Twitch does. The exclusive deal by Microsoft not only adds Ninja’s viewers to its platform, but it skyrockets the awareness of Mixer, which could trickle down into more people streaming other games, or at least Fortnite.

The difference between Mixer and Twitch extends beyond just their total audience though, Mixer’s CEO described in a recent live stream that what makes them stand out is their more clearly defined terms of service and a lower latency broadcast that promotes higher interactivity between streamer and viewers.

The move by Microsoft is a calculated one in an attempt to drive more viewers to the platform by being the only place that you can watch the most popular streamer in the world. By gaining the exclusive rights to Ninja, Mixer may lead more streamers to the platform, enriching the experience for the rest of the broadcasters on the site.

As the negativity around Twitch begins to build and their miscommunication with fans continues to remain unclear, Mixer may have the opportunity to become the main platform of choice for other major streamers if they keep handing out these deals, expanding their viewer base, and giving people a powerful alternative to Twitch.