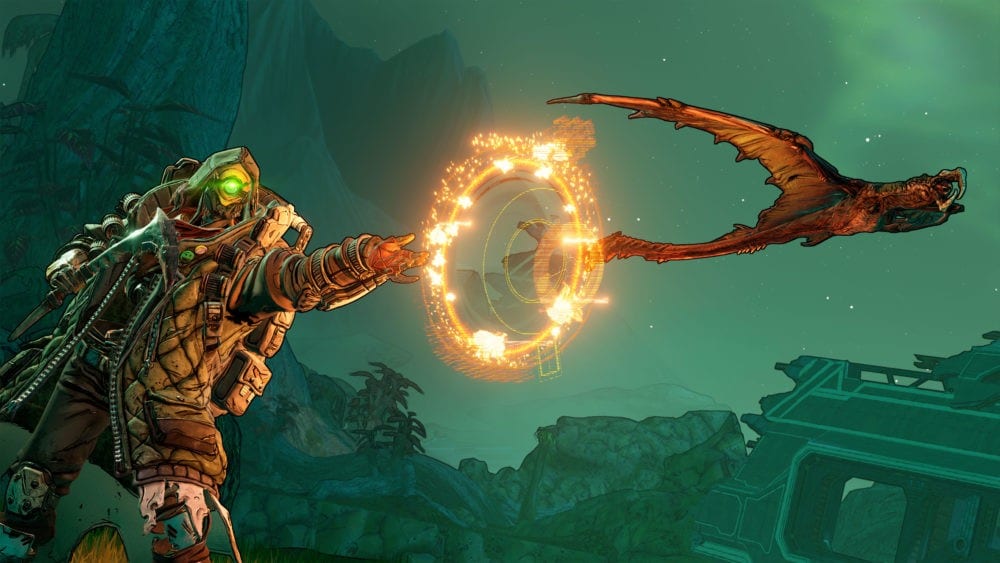 Between a short demo at E3 2019 and an eight hour preview last week, I’ve had a nice chunky taste of what to expect from Borderlands 3 when it launches in about a month. This includes playing as all four character classes at one point or another. The character I got to play as the most though was Flak (formerly stylized as Fl4k), the Beastmaster. I was pumped when I found out that the majority of our time during the demo was going to be spent test-driving this pet-driven class.

I’ve always been a fan of the pet-classes myself. I play Summoner in Final Fantasy XI and XIV, Necromancer in Diablo 2 and 3, Mechromancer in Borderlands 2, you get the drift.

Flak doesn’t disappoint. He’s the type of pet class that goes for quality not quantity, unlike a traditional Necromancer-like class.

You get your choice of three different pet action skills after you get your first skill point at level two, but as is the case with every character in Borderlands 3, new twists and augments on the action skills will present themselves as you work your way through the tree.

Each of the three pets have their own niche that you can leverage depending on the situation that you’re in.

If you’re going solo and want some support, you can opt for the Spiderant pet which will passively regenerate your health as long as it’s alive. If you’ve got plenty of cover and you just want to maximize your damage, the Skag pet will boost that for you. And finally, the Jabber monkey pet offers a mix of everything as it boosts your speed and can be upgraded to carry guns like SMG and Shotguns, turning it legit ally of sorts.

In addition to his action skills, each pet has their own command actions too. These allow you to mark an enemy for the pet to use some kind of other smaller-scale attack that the pet can use every once in a while such as the Skag vomiting corrosive acid onto an enemy that you mark.

Playing on my own, I did enjoy the Spiderant pet. Not only did it help keep me alive a little in the early game, before I had all my abilities and access to the arsenal of insane weaponry, its action skill provided a burst of high-radiation damage that would put a dent into tougher enemies.

Borderlands can feel a bit lonely when you’re playing solo, but despite that, lots of people are going to play it single-player anyway. For those people, Flak might be the way to go.

He provides you a companion that can hold its own in battle, doesn’t require a ton of management to be useful (my Spiderant was helping me mop up enemies quite effectively even as the “healer” pet), Even within that Hunter skill tree which contained the Spiderant, there was were action skill augments that allowed for more offensive options. Flak has a ton of options when it comes to customizing their pets.

On top of that, Flak’s personality kind of just matches his play style too. While all the vault hunters have their own motivations for eventually going along with Lilith’s plan to fight the Calypso Twins, Flak seems the most indifferent to the personal power struggle going on there.

Flak has his own unique ethical code, and initially can come off as a bit hostile, even to allies. The one character that Flak seemed to take a liking to right away in my play time though was Ellie, as he appreciated her “heft” and that she wasn’t weak and soft like everyone else he had run into so far. I look forward to seeing how that relationship develops as Ellie seems to have a much more prominent role in Borderlands 3’s story.

He can shine as a sniper thanks to his heavy bonuses to critical hit damage in the Hunter tree, has a unique playing style that relies on working alongside a pet, and just seems to fit that careful, solo player mentality of enjoying doing things their way without worrying about party synergy.

That said, Flak is a ton of fun to play, and the versatility of the pet action abilities gives him the ability to mesh well in a party scenario too if that’s how you want to go about things.

For example, the Skag attack commands can be upgraded to knock enemies up in the air, giving the whole team some reprieve. The Jabber monkey can also be augmented to turn into a tank, taking the attention of enemies for a brief amount of time. So while his passives are by and large very selfish, his action skills can be tweaked in a lot of ways.

In a nutshell, if you’re not sure what you like or how you’re going to play, Flak has a ton going on for him and is probably the safest pick for someone that is looking for a character that is strong, easy to play, and enjoyable in any gameplay.

And trust me, I can’t say that for every character in Borderlands 3. While I’m sure any character can clear Borderlands 3 easily on their own, Zane seems significantly more interesting in a party dynamic and equally less so on his own.

Shielding and distracting techniques are that much more effective when as many people as possible can take advantage of it. I picked Zane at E3 2019 because I tend to also enjoy “defender” classes as much as I do pet ones. Zane has a very cool character design and I dig the Irish accent, but throwing down a shield that is no longer useful to me a few seconds later because I want to move somewhere just isn’t as fun solo.

But if up to three other people can take advantage of my defensive tricks, it’s far more satisfying and rewarding.

So once again, if you’re looking for a safe solo pick that is more complex than just shoot and blow things up (if that’s you pick Moze), give Flak a go. He has our stamp of approval.