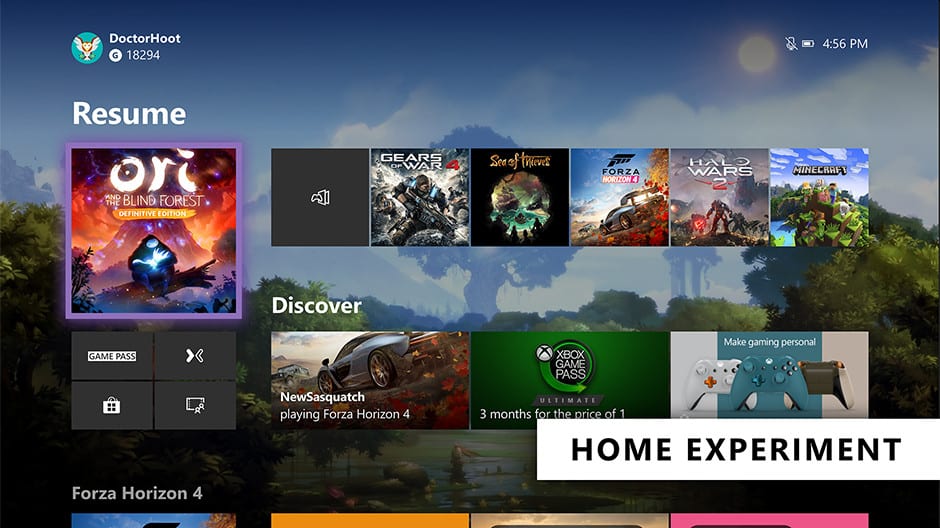 Today Microsoft revealed that a new update for the Xbox One’s system software is being delivered to insiders.

One of the most relevant features of the update is an experimental redesign of the home screen. You can see what it looks like at the top of the post.

Here’s what Xbox Insider Team Lead Bradley Rossetti had to say about it:

“The Home on Xbox One is the first thing you see when you turn on your Xbox One, and we want to deliver an easy and seamless experience for you to navigate your console. We’ve heard your feedback and have continued to iterate on Home to get you into your gaming experiences faster and keeping more of your content front and center. With today’s update, we’re experimenting with a streamlined user interface.

With this new experimental Home design, the first thing you’ll notice is we’ve removed the Twists from the top of Home in favor of separate buttons that launch your gaming experiences. The goal is to let you jump into Xbox Game Pass, Mixer, Xbox Community and Microsoft Store quicker than ever. We’ve also shifted things around to make more room for your recently played titles.”

Changes are also coming to voice commands, which will remove Cortana from the console.

We are now further evolving the way we support voice commands on Xbox and are moving away from on-console experiences to cloud-based assistant experiences. This means you can no longer talk to Cortana via your headset. However, you can use the Xbox Skill for Cortana via the Cortana app on iOS, Android, and Windows or via Harmon Kardon Invoke speaker to power your Xbox One, adjust volume, launch games and apps, capture screenshots, and more —just as you can do with Alexa-enabled devices today. We’ll also continue to improve the Xbox Skill across supported digital assistants and continue expanding our Xbox voice capabilities in the future based on fan feedback.

The update is scheduled to come to all Xbox One users this fall.

If you’d like to hear more about the future of Xbox, you can read some comments from Microsoft CEO Satya Nadella from a few days ago.