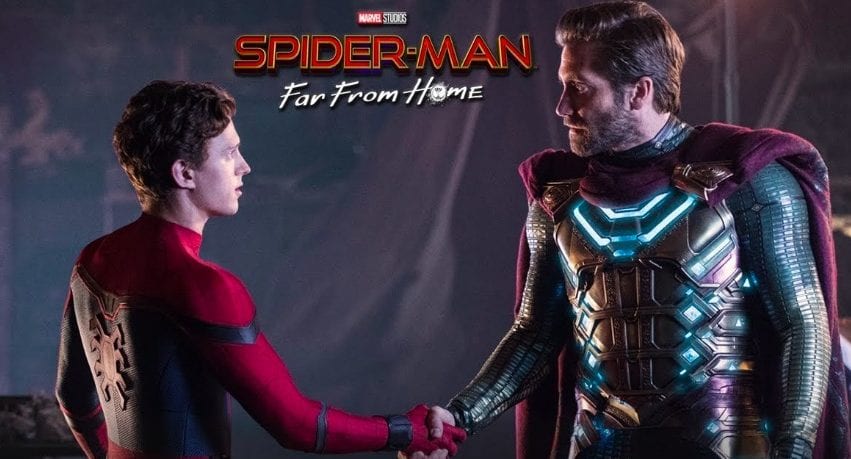 The new film in the Marvel Cinematic Universe, Spider-Man: Far From Home, is out now and is trying to continue the story after the devastating events of Avengers: Endgame. The movie itself is great, but the post-credits scenes have been all a lot of people can talk about. If you missed them or want a recap, here’s Spider-Man: Far From Home’s post-credits scenes explained.

Of course, do not read any of what follows if you haven’t seen Spider-Man: Far From Home, or even some of the MCU movies that precede it, because plot elements are covered from the very start.

The first post-credits scene in Spider-Man: Far From Home is arguably the most dramatic that the MCU has ever seen. It’s the kind of revelation that you’d usually end the film with, rather than leaving it until some people might have already left.

Throughout the film, Peter is terrified that people will put two and two together and work out that he’s Spider-Man. After all, Spidey has popped up on two of his school trips (yes, he’s Night Monkey here) and Peter keeps disappearing. It’s not exactly the best-kept secret.

However, that’s always been a key part of Spider-Man movies and stories. It’s always been about protecting his identity, and occasionally letting those close to him in on the secret.

Far From Home’s first post-credits scene does what not many people would have expected and reveals to everyone that Peter Parker is Spider-Man and suggests that he’s not the innocent hero he’s supposed to be.

The movie itself ends on Peter swinging through the air with MJ in his arms, terrified for her life. After the short credits scene, we pick the action right where we left it.

Spidey and MJ return to the safety of New York’s streets and Peter says that he’s got to go. It’s all rather normal up to this point.

As he starts to swing away, though, he hears a voice playing from the billboards surrounding him, and it’s not good news. The news is reporting a Daily Bugle story that suggests that Spider-Man is actually the menace behind the attack on London and the rest of Europe, and that he murdered Beck in cold blood.

Mysterio’s last devious act was to film his final moments with Spidey, and someone has then edited that footage to make it seem like our hero killed Mysterio and ordered the attack with the use of EDITH.

Now, it’s not 100% clear who edited the footage and sound to make it look like this. It could have been Beck’s technician, who we see a glimpse of while he still works before the end of the film, or maybe it was J. Jonah Jameson, who we then see telling the story and who is responsible for the news piece at the Bugle.

In Beck’s final moments alive, we see him talk into the camera, looking all vulnerable and innocent as he tells the world that the man behind Spider-Man is actually Peter.

Then, we break away from the footage we have already seen and know to be a lie to see Jameson, who’s once again played by the excellent J.J Simmonds, as he shouts at the camera in the character’s typical way, telling everyone that Spider-Man is a menace who should not be trusted.

So, not only has Peter’s worst nightmare come true and everyone seemingly knows that he’s Spider-Man, but he’s being portrayed as the bad guy and someone who’s responsible for countless deaths and unimaginable destruction across Europe.

This is a shocking and potentially huge way to set up the next phase of the MCU. This is not only a huge change for Spider-Man and Peter Parker on a personal level, but it suggests that a member of the widely worshipped Avengers isn’t the hero everyone thought he was.

How will both Peter and the series go from here? We’ll have to wait and see with whatever film comes next.

Far From Home was not done there though. Usually, we get one post-credits scene that ties into the future of the MCU and another that’s a jokey one that plays into something silly that happened in the film we just watched.

However, while it was still fun, the second scene in Spider-Man Far From Home leaves us with a lot of questions about what’s been real in the last few MCU films and what Nick Fury is up to.

The scene begins with Nick Fury (Samuel L. Jackson) and Maria Hill (Cobie Smulders) in a car as they leave London. However, it’s revealed that they have been Talos and his wife Soren all along, who are the Skrulls from Captain Marvel.

Talos then speaks to Nick Fury on the phone, telling him that he can’t keep answering questions about where the Avengers are when he’s not qualified to say. Then, as they hang up, we see Fury relaxing on a tropical beach, on a vacation.

However, he’s actually relaxing in some kind of room that simulates certain landscapes. Then, he walks out of the room to reveal a huge base that’s full of Skrulls. Is he just hanging out there, or is he building an army?

This could tie into future MCU movies by suggesting that Fury is sending Skrulls to take the place of prominent characters, or it could point to the Skulls having a huge part in the story going forward, maybe with them engaging in a war of some kind.

It also poses some questions about how long Fury and Talos have been doing this. Has Talos been getting involved in Earth matters since Captain Marvel, which is set in the 90s, and has he been a part of other MCU movies without us knowing?

Either way, it’s likely that Fury and the Skrulls will play a huge part in Phase 4 going forward.

That’s it for our Spider-Man: Far From Home’s post-credits scenes explained. If you’ve got any other theories or thoughts on the scenes, be sure to let us know in the comments down below and search for Twinfinite for more on the MCU.