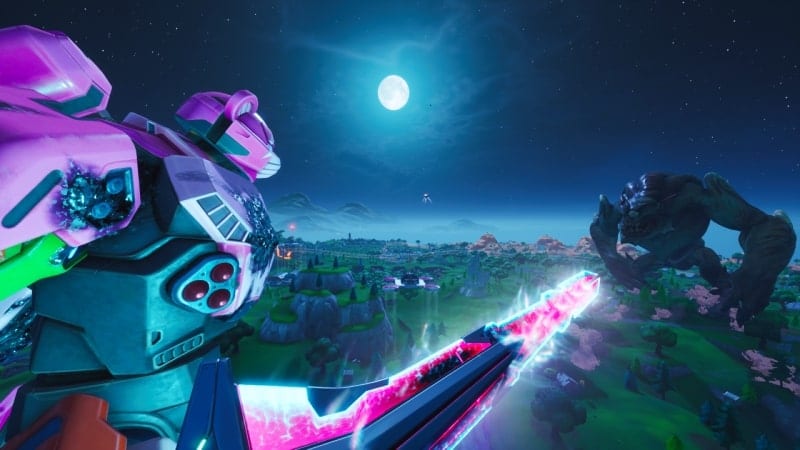 Fortnite’s Season 9 event took place on Saturday afternoon, which saw the robot/ mech being built at Pressure Plant over the last week or so go head-to-head against the giant monster from underneath Polar Peak in an epic fight on the map. While the event may have been the biggest in terms of scale that Epic Games has done yet, it wasn’t enough to turn around declining viewership numbers.

The news comes via GitHyp which reports that despite its 606k concurrent viewer peak while the event was taking place on Saturday, the epic duel between the Cuddle Leader-fashioned robot and monster wasn’t enough to break into the game’s top 10 viewed moments on the streaming platform.

That being said, Saturday’s event did bring the game’s highest peak viewers count on Twitch since February of this year. Though, looking at average viewers since the start of this year, Fortnite has seen a notable decline from 176,875 in January down to 113,665 in the last 30 days.

The event on Saturday saw the robot emerge victorious from its epic battle against the monster. The mech, after taking a heavy beating from the monster, pulled an orb from the vault at the center of Loot Lake and the statue — which turned out to be a giant sword — from the water feature in Neo Tilted to slay the creature once and for all. You can check it out in Ninja’s video down below:

Fortnite Season 10 is due to kick off later this week, with players now speculating what the increasingly-unstable orb at the center of Loot Lake could spell out for the new season.

Epic Games has yet to share any teasers for the new season over on Twitter yet, which it tends to do, but expect those to come in the days leading up to Season 10’s arrival on Thursday (if this is still the confirmed date). For more on the current season, including all Fortbyte locations, be sure to check out our Season 9 guide wiki.