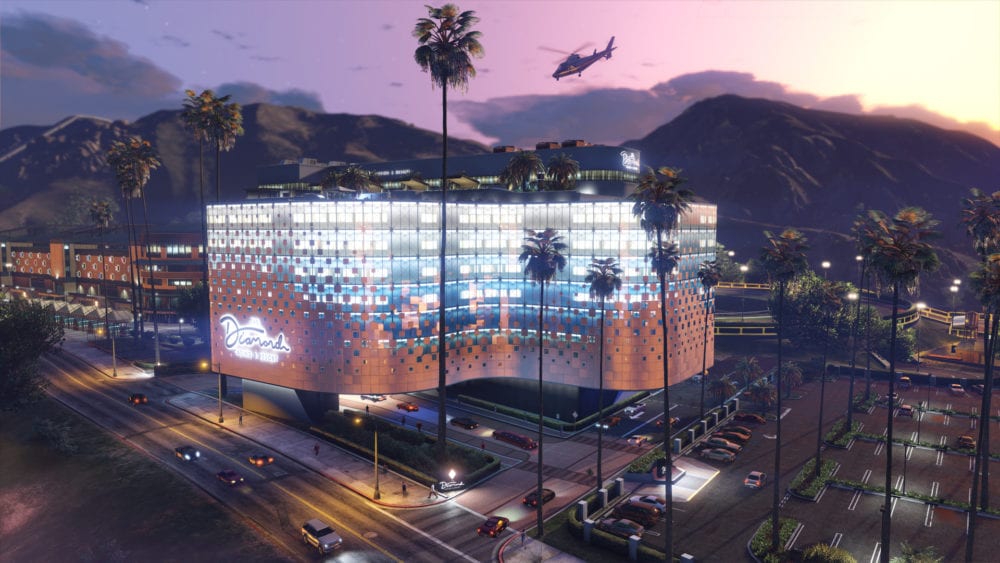 GTA Online’s most substantial update in a long time finally adds the casino that fans have been craving. Minigames, a luxurious new apartment, stylish apparel, and a new supercar are just some of the features added in addition to the storyline itself. There’s also a whole bunch of collectibles, too. These playing cards are scattered across Los Santos, and finding them all unlocks the awesome High Roller Outfit. Here’s a handy list of where all the playing card locations are.

Before we jump into showing you the locations for each card, it’s worth noting that the cards themselves are white in color and many of them are laying on bright colored surfaces. In combination with daylight, this makes actually seeing them often quite tricky.

What’s more, there are no audio cues or anything to help you actually find them, so you really do have to keep your eyes peeled. We’d recommend attempting to find them during night time, just because they stick out a bit more obviously.

All credit and thanks must go to members of the gtaonlineforums for compiling the information, exact locations, and screenshots mentioned in this guide.

On a ping pong table, located at at the pier above Alamo Sea where the Valkyrie is stored for the Humane Labs Raid.

You’ll see the card on a coffee table in the changing room of Rockford Plaza.

On a short table at the front of Nelson’s General Store.

The card is on a shelf beside a radio inside the Fire Department on Macdonald Street.

Walk to the end of the pier and you will see the card on the gifts kiosk next to the hotdog stand.

Look for a blue table furthest from the entrance of the Pacific Bank.

Go into the tattoo parlor and you’ll see the card on the table.

The card is actually on the L of the radio station’s signage, as pictured below.

As pictured above, you’ll see it sitting on a vehicle on the side of the road.

There’s a house close to the Industrial Plant and the card is sitting on a red tool cart just outside it.

In the back office of the Convenience Store.

Inside the hangar on McKenzie Field there’s a desk to the right where you’ll find the card.

Go down a dirt road to find a house, and the card is sitting on its porch.

Visit the Auto Exotic garage and you’ll see the card on a red tool chest.

On a bench in the little Tram station near Heli Tours.

Entering via the front entrance of LISA, go up to the first floor and you’ll see one on a bench on the left near the stairwell.

Another one in the back office of a Convenience Store.

Go down the dirt trail up Mt Gordo and you’ll see one lying beside the campfire between the 3 tents.

Visit the Liquor Store and look for a shelf with a tray of ecola in the first backroom.

At the bottom cable car station, there’s one sitting on the window sill.

Vesting on an ATM across the road from the tattoo parlor.

On a desk in the left side of the Los Santos Customs building.

Enter the Ammu-Nation and look for a table right outside the gun range.

Sitting on a bench near eagle statue between FBI & IAA.

Sitting on the porch of a beach camper in the Hippie Hangout area.

A card can be found on the lookout Post located right at the top of the mountain overlooking the train tunnel.

You’ll see it sitting on the cinder block wall in front of the Chihuahua Dogs stand outside the Movie Studio.

You’ll need to make your way to the backyard of the mansion at the intersection of West Eclipse and Tongva Drive. The card is on the head of a statuette in a large-scale game of chess.

On the safe in the back office of the Convenience Store.

Inside the building across from Life Invader, you should see a card on the shelf right when you enter.

There’s a mansion at the end of Steele Way, and a playing card is sitting on a couch in the garage.

There’s a group of houses at Cape Catfish. The blue one has a card on one of its window sills.

Go into Yellow Jack Bar and look on the pool table.

Inside Sandy Shores Fire Station there’s a card on a red toolbox.

Outside of Freeway YouTool hardware store, there’s a card sitting on some washing machines.

Near where you crack the safe in the Lost Hangout area there’s a card sitting on the stage floor.

Inside the Vanilla Unicorn, you’ll see one on a bench seat of the second group booth from the entrance.

Inside the Ammu-Nation on the front counter.

There’s a picnic table inside the terminal building where you’ll find a playing card.

Go to the gym area and search the benches.

Inside the barbershop, there’s one sitting on a coffee table.

Go to Madrazo’s Ranch and find the sheds at the back-left of the ranch. The card is inside the middle one.

Visit the observatory and you’ll see one by the restrooms in the parking lot.

On a chair in the western courtyard of the Gentry Manor Hotel.

In the changing room of the Discount Store, there’s a card.

In the booth at the north entrance of the Military Base, a card is sitting on a table that runs the length of the room.

On the railing on the right after coming down the wooden stairs of the Dock.

Next to the road connecting Grapeseed and Sandy Shores Park, there’s a building called the View Diner. Outside, you’ll see a playing card on a white table.

On top of a picnic table up a dirt road that leads away from the most northerly Convenience Store on the map.

The backroom of the second Convenience Store.

Inside a parking booth of the Maze Bank Arena parking lot, there’s one sitting on the table.

To the rear of a cheap vehicle warehouse, there’s one inside a dilapidated bus.

On Didion Drive there’s a yellow house. Go to its rear and you’ll see a card sitting on a ping pong table.

That covers all 54 GTA Online playing card locations. For more useful tips and guides on the game, be sure to search Twinfinite.