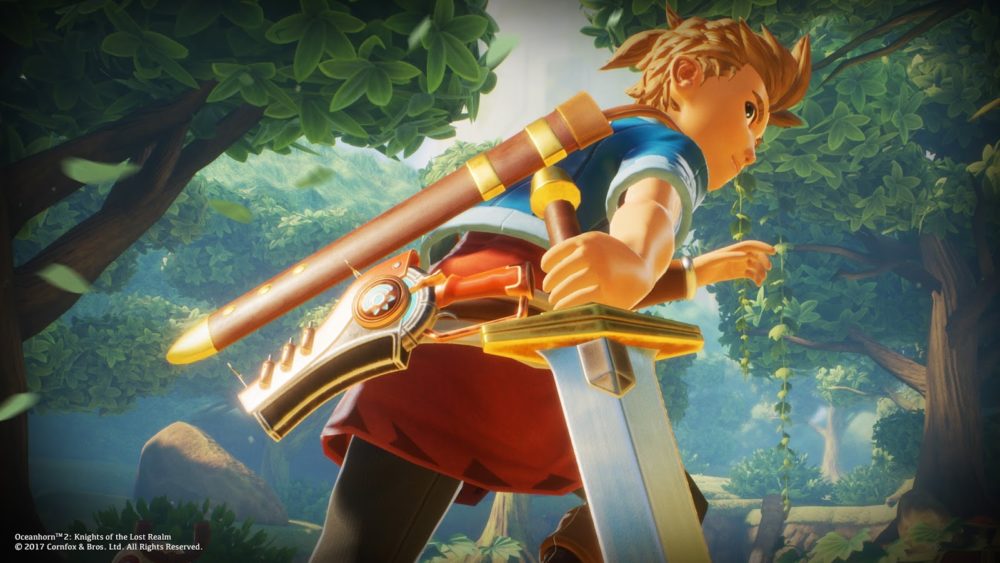 Despite its critical acclaim and long-standing popularity, there aren’t many games that have emulated the Zelda series, and even fewer that have succeeded in creating something even approaching the brilliance of that iconic series. Developer Cornfox & Bros did just that with Oceanhorn: Monster of the Uncharted Seas, though, and all on a smartphone platform, overcoming the lack of conventional controls and a market dominated by free-to-play strategy games.

Big things are planned for its upcoming sequel, Oceanhorn 2: Knights of the Lost Realm, which promises a full console-quality experience that’s grander and more ambitious in every way, with new mechanics, sharper graphics, and a more involved story.

It’s a hugely exciting prospect, and I was keen to find out more about this intriguing sequel, of which not a great deal has been seen since its announcement back in 2016.

We reached out to the developer to answer some burning questions about Oceanhorn 2 and were grateful for the opportunity to speak with communications director Tommaso De Benetti, with support from creative director Heikki Repo.

Alex: Oceanhorn doesn’t try to hide the fact that it’s heavily inspired by the Zelda series, but to those that say it sails a little too close to the source material it borrows from, what are you doing with Oceanhorn 2 that will set it apart as its own unique flavor?

Tommaso De Benetti: We’re not bothered by the comparison with Zelda, even though there’s much more than meets the eye. If people get that kind of vibe, then it means we are communicating correctly the type of experience they can expect.

That said, it’s like saying every FPS looks like any other FPS – there might be similarities, but each experience is different in how it plays. We think Oceanhorn 2 will make fans of many different RPGs happy.

[Editor’s note: De Benetti encourages people to read more about the inspirations behind Oceanhorn 2 on the developer’s blog]

A: The first Oceanhorn was very much about a young boy on a solo adventure, but the sequel features NPCs that travel with our Hero. What sort of role will these characters play in terms of gameplay and story?

TDB: Trin and Gen will accompany Hero for most of the game, and be full members of the party. The player always controls Hero, but you’ll be able to issue commands to your companions, and they will help in battle. Other key NPCs won’t be available during exploration or combat but have a relevant part in the story.

A: Mobile phone hardware has improved exponentially since the first game’s release. What are you able to do this time with more processing power at your disposal that would have been impossible before?

TDB: After finishing the first game, we felt that these devices are getting powerful, so we had to aim for console quality. One example of what we can do now is a high-end third-person camera, which impacts everything in the gameplay: verticality, 360 degrees of freedom, etc.

From a technical standpoint now we have physics-based rendering: the textures have parameters such as roughness, metal surfaces, etc. These, in turn, impact light, shadows, and many other things. 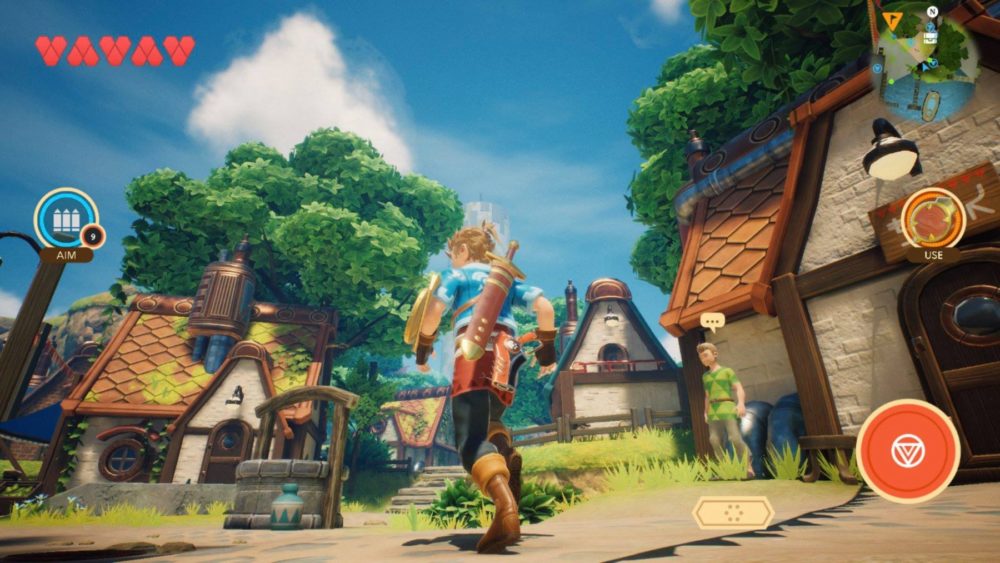 A: What were some of the key lessons learned from developing the first Oceanhorn?

TDB: That we can pull off anything if we put our heart into it, and that’s why we have raised the stakes.

Alex: What are some of the core philosophies that have driven Oceanhorn 2’s development this time around? Is there a greater emphasis on one component of the experience, perhaps –combat, story/characters, etc?

TDB: One of the main inspirations for Oceanhorn 2: Knights of the Lost Realm is Hironobu Sakaguchi’s The Last Story, where the plot was advanced during gameplay in addition to cutscenes.

In Oceanhorn 2 characters’ companionship has a central role: they talk in combat and during exploration, for example, a bit like in the Mass Effect Trilogy.

A: Did the success of the product on other platforms influence the complexity of the game’s mechanics this time around?

TDB: The combat system is two-three times more sophisticated than in the first game, where most of the combat was item-based. This time you can dodge, sprint, combine sword and Caster Gun.

These requirements came from the goal we set for ourselves of making an excellent third-person adventure game.

A: The mobile games industry is dominated by the free-to-play model, do you think that Oceanhorn’s success proved that there is a market for premium products? Have you ever thought of going free-to-play?

TDB: We have never considered it seriously. There are much more significant players on the market now, and we would need to be a very different company to make it work. We agreed at the time that Oceanhorn would stick with the premium model; during development first came the $1 apps, then free-to-play.

We were uncertain about what to do, but our publisher convinced us to go with a $9 price-point. We didn’t think it would work on iOS, but it did, and that’s also how we found out that there is still space for premium games. Now Apple Arcade is trying to create a new space for products like ours.

A: In the recent trailer we get to see substantial urban areas. How large are these areas, and do they serve as locations in which gameplay –combat, exploration, puzzle-solving, etc– takes place? Or are they simply bigger versions of towns where players can purchase items, interact with NPCs, as in the first game?

TDB: You’ll have exploration, dialogues, combat, and puzzles in several of these areas. In Oceanhorn 2, the world of Gaia appears to be dominated by a boom in technology, but we know that magic is to play a role, too. 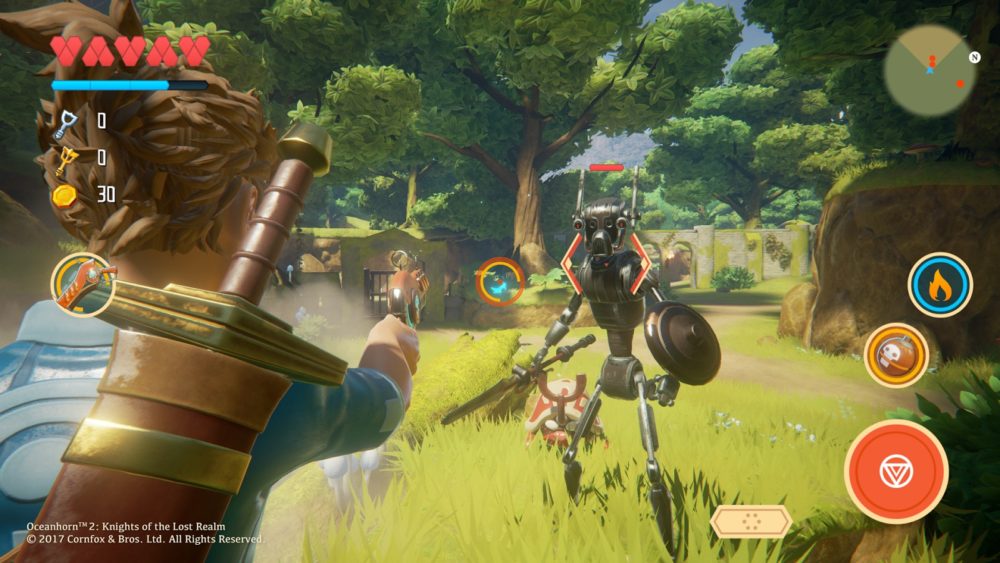 TDB: There is definitely some tension. The rise of Archimedes as Grand Regent has inaugurated a new age of technological development – science over magic and faith. The mages are banned from the White City, and their headquarter replaced by new industries. While magic is not strictly speaking illegal, it does make eyebrows rise.

A: Oceanhorn’s dungeons were engaging but fairly simplistic by design. What surprises are in store for players in terms of the dungeons and puzzles Oceanhorn2 is offering?

TDB: The camera angle affects everything in the game: you find environments that you can observe to find clues, your party members can be commanded around to help you solve puzzles or fights… You are going to find plenty of visually exciting locations in Oceanhorn 2.

A: How much bigger is the team at Cornfox & Bros this time around? Have you increased the number of personnel as you’ve scaled your ambition for the sequel upward?

TDB: The first Oceanhorn was made by three people, the “Brothers + the Cornfox.” The team is now up to 7, plus some external help, and we’re still aiming for a 15-20 hours long experience.

That wraps up our interview. You can check out the latest gameplay footage of Oceanhorn 2: Knights of the Lost Realm below: