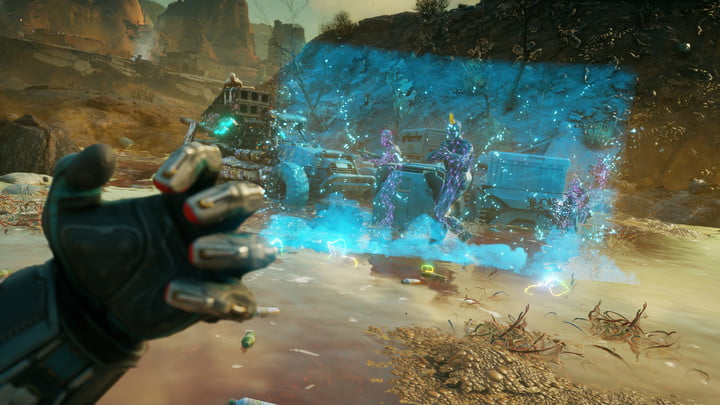 Aside from just shooting a bunch of Authority henchmen with guns, you’ll also want to make use of the useful skills you get from your Project upgrades. Here’s a rundown of the best Project upgrades and skills to get first in Rage 2.

Best Project Upgrades and Skills to Get First in Rage 2

The Basic list of Project upgrades aren’t all that appealing, but Unlocked Overdrive Multiplier is one that you should definitely get early on.

Feltrite drops aren’t that great in Rage 2, especially early on in the game, so this should allow you to farm more at a quicker pace.

Marshall’s available skills are much more useful for combative situations and improving your survival overall.

First off, Sprinting Reload allows you to reload weapons while sprinting, which is pretty much a must-have regardless of your play style. Couple that with the other sprint-related Project upgrades, and you’ll be able to do a lot more while running around, including reloading your weapon and making sure your damage taken is reduced.

Tactical Movement Boost and Surprise Attack are also nice to have if you’re playing a little more stealthily in Rage 2. Your stealth attacks will be much deadlier, and you can get around quicker while being sneaky too.

The Project upgrades on offer here are all about money and efficiency. The Chemist, Engineer, Pyrotechnician, and Technician skills are all relatively cheap to purchase, and can help you seriously save on resources when crafting.

You’ll also want to pick up the Salesman and Trade Negotiations skills for more efficient use of money.

This set of Project upgrades is more focused on Feltrite mining and enemy disruption. However, the two skills listed above are the ones that we feel are much more vital for the early game period.

Impact Absorption pretty much nullifies any fall damage you can take in Rage 2, which gives you a lot more freedom and mobility in combat. Storage Container Tracking is also generally pretty helpful in allowing you to grab all storage chests for more money and resources before leaving an area.

And those are our picks for the best skills and Project upgrades to get first in Rage 2. Be sure to check our Rage 2 guide wiki for more tips and information on the game.