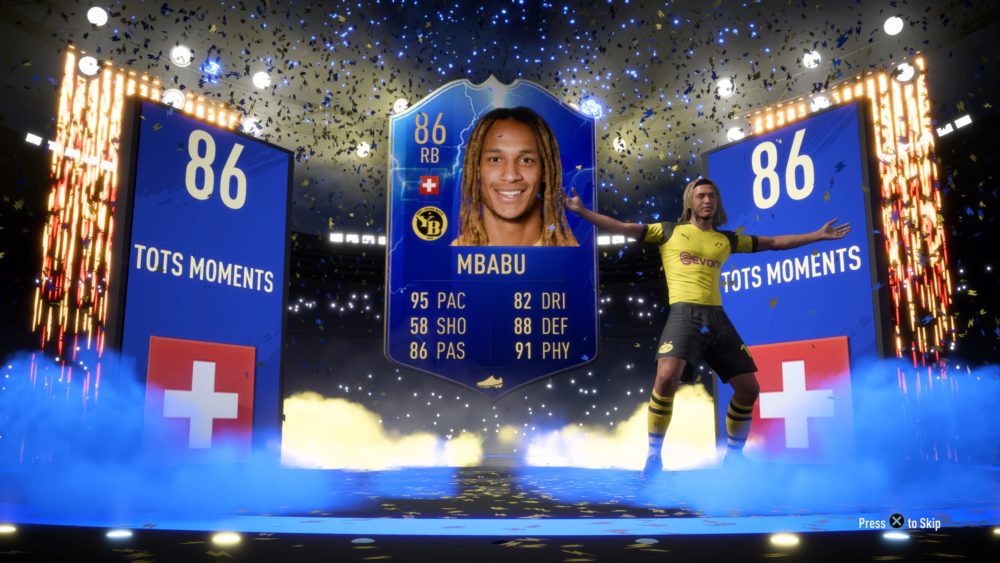 Team of the Season has finally begun and EA Sports has released the second TOTS Moments SBC. Here’s everything you need to know about how to complete the TOTS Moments Mbabu SBC in FIFA 19.

How to Complete TOTS Moments Mbabu SBC in FIFA 19

The card celebrates Mbabu’s two assists in one game against FC St. Gallen earlier in the season. It seems like TOTS SBC players will be following the Moments theme that has run throughout the season in other promos.

It’s a pretty good card, with great pace and defensive stats, and it isn’t too expensive either, at around 40k coins. That might be due to him being from the Swiss league, which makes him difficult to fit into a team. Here are the requirements.

Completing this SBC is very simple. You don’t even have to use the major leagues to build a full 83 rated squad. The likes of the Liga Nos or the Chinese League have plenty of 83-rated players in FIFA 19.

Do note, though, that 83 rated players have shot up in price due to the Guaranteed Community TOTS SBC that was released yesterday.

The likes of Oscar, Giuliano, Bas Dost, Felipe, or Iker Casillias would be great options for the Mbabu SBC. A lot of those players, from the Liga Nos especially, get a strong link between each other, so you’ll be able to hit the 80 chemistry required.

You should then be able to slip in the TOTW player in wherever you can. Be sure to use players from the current FIFA 19 TOTW, as they’ll stay cheaper by being actively packed. For the Switzerland player, Jann Sommer will be a great option.

That’s everything you need to know about how to complete the TOTS Moments Mbabu SBC SBC in FIFA 19. For more tips and tricks on the game, be sure to search for Twinfinite.