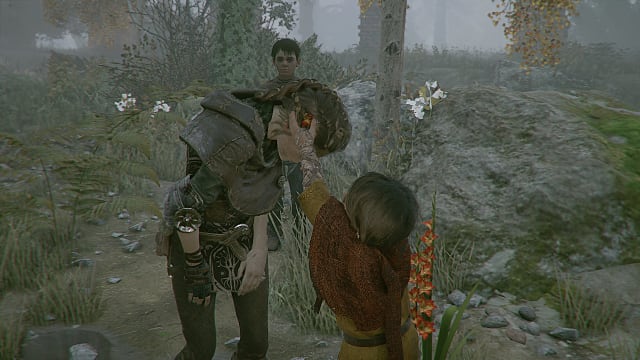 A Plague Tale: Innocence stands out in a lot of ways including, oddly enough, in its collectibles.

Yes, you read that right. Collectibles, those annoying bits and bobs that have driven gamers crazy for years.

Most serve little purpose other than to pad gameplay and forcibly impede player progress. Even when they don’t, they prod one’s need to cross items off their to-do list and appease their compulsion to pick up whatever they can find.

And to be sure, the collectibles in A Plague Tale Innocence do this to a degree. Tracking them down can draw out how long players spend in each of the game’s chapters, scouring areas for medieval trinkets, abandoned lab equipment and the like.

Or at least, that’s what they do before players find some of the herbs that can be collected for Hugo’s Herbarium.

From time to time, players will happen upon flowers protagonist Amicia’s younger brother Hugo recognizes from his studies with their mother. He’ll excitedly scamper off toward them, eager to tell his sister all about their name and what they do.

He’ll then place one of them in Amicia’s hair; partly as a reminder of this natural treasure they found, but also as a good luck charm to protect them from dangers to come.

Though Amicia will be annoyed by this in earlier levels, she’ll warm to these breaks in the action, relishing each quiet moment they bring with Hugo and even picking some herself when the two become separated at key points in the plot.

These moments are brief, and easy to miss if players don’t typically try to find collectibles. And yet, with each new flower players find, they’re all the more likely to seek them out, rewarded with more moments of tranquility and beauty for their effort.

The game’s other collectibles act in much the same way, if to a lesser degree. A pen used by Amicia’s mother, a long-lost family heirloom and and so many other items each provide a brief moment between the game’s characters, fleshing out their relationship and the setting in tandem.

It’s a simple, genius move on the part of developer Asobo Studio, making otherwise throwaway elements of the game worthwhile for players to find. It wouldn’t be surprising if the design choice drives more players to seek out these collectibles overall.

So why don’t more developers take this approach with their games’ collectibles?

It’s a fair ask, especially considering just how far the mechanic has lagged behind other facets of game design.

Whereas storytelling, world design and other elements have made great strides in recent years, collectibles aren’t that different from how they were one, two or even three decades ago.

The vast majority of games, from AAA titles to indies, still use them as entries on a check list, reserved for those who are desperate to search levels from top to bottom for little more than a trophy or achievement.

And yet, they could be so much more. How great would it be for players to get some character development and dialogue bits between Nathan Drake or Chloe Frazier and their friends for every treasure they found in Uncharted?

Who wouldn’t be happy with some character development between Link and whoever assigns him out to collect gems, seeds and other objects scattered throughout Hyrule?

Small as they may seem, these additions could take a throw-away game mechanic and breath new life into it, bringing games as a whole further forward as a result.

Players would have more reason to track down every collectible, and developers could focus less on padding titles with disposable items and more on injecting as much meaningful content into games as possible.

Of course, there would be logistics to work out. Not every collectible can be as closely tied to the characters as they are in A Plague Tale: Innocence, and designing collectibles around this idea could be a lengthy process in an already time-consuming medium.

And yet, if it’s possible, there’s little reason not to at least try to implement the change. Games are changing, and if collectibles aren’t given the proper care and treatment they need to be worthwhile, their inclusion in games will only become more pointless.