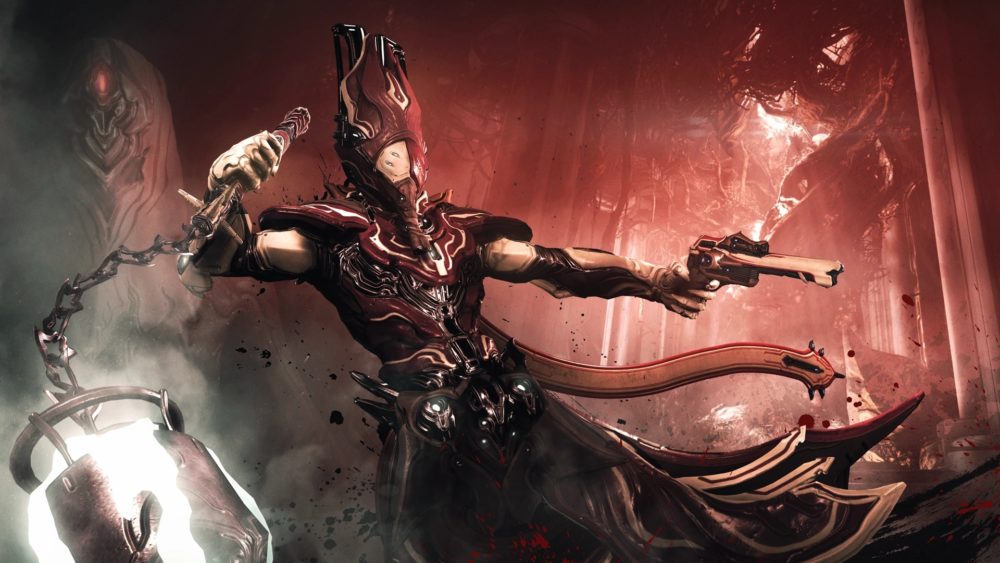 How to Get & Build All Harrow Parts in Warframe

Warframe is no slouch when it comes to classes. From the stealth-happy Ash to the high-tech bard Octavia, there’s a class, otherwise known as a Warframe, for everyone.

Particularly (sado)masochistic gamers who want to sacrifice their shields for some serious buffs and transform enemies’ dying breaths into energy will be attracted to Harrow.

The Harrow Warframe is instantly recognizable thanks to its tall head and thurible, but like all Warframes, you cannot obtain Harrow without a significant sacrifice to the gods of grinding and RNG. Here’s how to get and build all of Harrow’s parts.

Getting Started on Harrow

A complete Harrow isn’t just waiting to be looted from a random chest. The best way to obtain Harrow is to craft it with tons of materials and credits, as well as some rare blueprints.

Harrow is divided into three parts: Neuroptics, Chassis, and System. Each part is crafted from its own required materials and blueprints. While a lot of time and grinding is necessary, at least you don’t have to farm bosses for blueprints, which is a rarity in Warframe.

Rubedo, an uncommon drop, is found on Phobos, Earth, Pluto, Europa, Sedna, and the Orokin Void. Enemies and containers in these areas can bleed anywhere between 15 to 25 Rubedo.

However, the Dark Sector Survival mission in Zeugma, Phobos is apparently a great location to farm for Rubedo. Plus, you can purchase 450 Rubedo from the Market for 30 Platinum.

Polymer Bundles are another uncommon material and found on Mercury, Venus, and Uranus. Enemies and containers can drop these components in bundles of 40 to 80, but the Dark Sector Survival mission in Assur, Uranus may be your best bet for farming.

If you want to skip the grind, though, you can purchase 300 Polymer Bundles from the Market for 30 Platinum.

Plastids, the third uncommon component needed for Neuroptics, are found in enemies and containers on Saturn, Uranus, Phobos, and Eris. Plastids drop in quantities of 10 to 30, and Piscinas, Saturn is an ideal farming location since it is yet another Dark Sector Survival mission.

Plastids are always for sale in the Market at 300 Plastids for 30 Platinum.

The final Neuroptics material, Neural Sensors, are rare loot that sometimes drop from enemies and containers on Jupiter and the Kuva Fortress, but you can also find them on the corpses of the Raptors and Alad V bosses.

These components drop in bundles of 1 to 4, especially in the Survival and Dark Sector Defense missions in Elara and Sinai, Jupiter.

While you can always purchase 1 Neural Sensor from the Market for 10 Platinum, you can also craft a Neural Sensor with 50,000 Alloy Plates (found on Venus, Jupiter, Sedna, Ceres, Phobos, and Pluto), 50,000 Nano Spores (obtained on Saturn, Neptune, Eris, and the Orokin Derelict) and 25,000 Salvage (salvaged on Mars, Jupiter, and Sedna).

Crafting a Neural Sensor takes one hour or 2 Platinum for a rush job.

After you obtain all the necessary materials, you still need the Neuroptics blueprint, which is only found in the third vault of the Spy mission on Pago, Kuva Fortress.

However, since the blueprint has an 11.28% chance of dropping, you will probably need to repeat the mission several times.

Once you have all the parts and the blueprints, just pay the Foundry 15,000 credits and wait 12 hours (or pay 25 Platinum for a rush job), and you will have your first Harrow part.

Alloy Plates are a fairly common drop and are found in enemies and containers on Venus, Jupiter, Sedna, Ceres, Phobos, and Pluto in bundles of 50 to 150. If you farmed Alloy Plates to craft Neural Sensors, you might have enough for a Chassis.

If not, farm plates in Berehynia, Vodyanoi, and Charybdis, Sedna; Casta, Krise, and Cinxia, Ceres; and Aphrodite, Tessera, and Kiliken, Venus.

Moreover, you can purchase 1,500 Alloy Plates from the Market for 30 Platinum.

Salvage, another common component, is obtainable from enemies and containers on Mars, Jupiter, and Sedna. Enemies drop this material in the hundreds, and if you’ve been crafting Neural Sensors, you might have enough Salvage.

If not, try running the Survival mission in Elara, Jupiter or the Mobile Defense mission in Olympus, Mars.

As usual, you can always purchase 3,000 Salvage through the Market for 30 Platinum.

Oxium is an uncommon material but not because it sometimes drops from enemies. This component is occasionally found in Storage Containers, low-tier Bounties, and the third cache in the Sealab Sabotage mission on Uranus.

However, the most reliable source of Oxium is Oxium Ospreys, which always drop anywhere between 7 to 12 Oxium if they are killed before they self-destruct.

Oxium Ospreys are uncommon enemies that usually spawn in Corpus Sabotage, Excavation, Defense, Survival, Mobile Defense, and Interception missions. Oxium is also available in the Market at 30 Platinum for 300 Oxium.

Harrow’s final Chassis material, Orokin Cells, is a rare drop found in enemies and containers on Saturn, Ceres, and the Orokin Derelict. You can also find Orokin Cells on bosses, most commonly General Sargas Ruk and Lieutenant Lech Kril.

Orokin Cells usually drop in bundles of 1 or 2, but the Cell Arrays on Telesto, Saturn and Gabil, Ceres are also good sources of Orokin Cells.

After you have the necessary materials, you still need the Chassis blueprint. This blueprint only drops from Corrupted Void Fissure enemies, which are only found in special Void Fissure missions.

However, at a 3% drop rate, you will need to kill a small army for the blueprint, but when you have it, just spend 15,000 credits at the Foundry and either wait 12 hours (or pay 25 Platinum for a rush job), and you will get Harrow part number two.

The first material for Systems, Circuits, is an uncommon component from Venus, Ceres, and the Kuva Fortress. Each enemies and container can potentially drop between 20 to 50 Circuits.

If you are tired of the grind, you might want to purchase 1,500 Circuits on the Market for 30 Platinum.

Cryotic is a unique resource since it doesn’t drop from enemies. Cryotic primarily comes from Excavation missions, although it is sometimes found in Orokin and Earth Sabotage Resource Caches.

Unlike other resources, you cannot purchase Cryotic in the Market, but resource boosters double the amount of Cryotic earned per Excavation mission, so this is one grind you cannot skip, only lessen.

The next material, Ferrite, is a common drop found in enemies and containers on Mercury, Earth, Neptune, and Orokin Void. Ferrite tends to drop in bundles of 50 to 100.

The Survival mission in Apollodorus, Mercury and the Mobile Defense mission in Eurasia, Earth are popular Ferrite farming locations, but you can always purchase 3,000 Ferrite in the Market for 30 Platinum.

The final material needed for Harrow’s Systems, Control Modules, is a rare drop from enemies and containers in Neptune, Europa, and the Void. You will usually find modules in quantities of 1 to 3.

While bosses such as the Hyena Pack and Raptors tend to drop Control Modules, your best bet for farming modules is Void missions. Control Modules are also available through  Market at the cost of 10 Platinum per module.

Once you have all the parts for Harrow’s Systems, you still need the Systems blueprint, and here is where things get tricky. This blueprint only drops during Defection missions. However, reward tables change after rescuing a certain number of NPC squads (this is known as Rotations).

Rotation B always has a 2.01% chance of dropping the blueprint, while Rotation C has a higher 7.52% to 11.25% chance, depending on the mission’s difficulty.

However, this only applies to the PC version of Warframe. On consoles, Harrow Systems blueprints only drop 7.52% to 11.25% of the time as a Rotation C rewards. As with the other parts, Systems cost 15,000 credits and require 12 hours to build (or 25 Platinum for a rush job) at the Foundry.

Putting Everything Together for Harrow

After crafting the Harrow Neuroptics, Chassis, and Systems, all that’s left is to build the Harrow Warframe itself, which also requires its own blueprint. This blueprint is only available as a reward from the Chains of Harrow quest, which you can’t start until you finish The War Within quest.

Chains of Harrow takes you to various locations and includes tasks such as killing certain enemies and escaping a level with a relic. One mission in particular requires numerous Kinetic Siphon Traps, which can be purchased from Cephalon Simaris in Tenno Relays at 5,000 credits for 10 traps, so be prepared.

Once you finish Chains of Harrow, you will obtain the Harrow blueprint —as well as a doppelganger of your Operator who will occasionally pop in to scare you on your Orbiter. However, you need one more resource before you can craft the Harrow: 2,000 Kuva.

Kuva is a special item that is primarily available through Kuva Siphon missions. Destroying the titular Kuva Siphons during these missions net you 550 to 700 Kuva per siphon, double that if you accept the more difficult Kuva Flood variant missions.

You can also acquire Kuva through Cetus and Fortuna Bounties, Sorties, and Nightwave.

Once you have all the necessary Kuva, you can finally build Harrow, which takes 72 hours to finish. If you can’t wait, just pay 50 Platinum for one final rush job, and you have the Harrow Warframe.

If the task of grinding out countless hours for all the components and blueprints sounds a little too daunting, you can always just buy the Harrow Warframe through the Market for 225 Platinum.

And that’s everything you need to know about building Harrow in Warframe. For more Warframe tips, tricks and guides, pay attention to the Twinfinite wiki page.