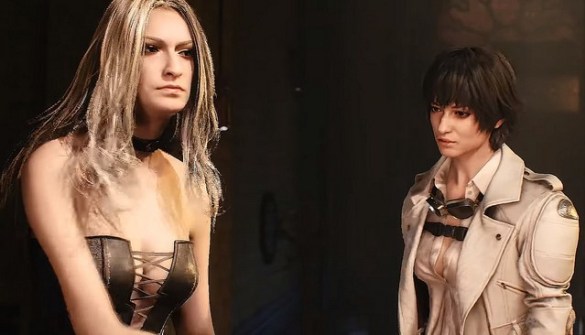 *Spoiler Warning* We’ll be spoiling a minor scene after the credits of Devil May Cry 5 for this topic, although we won’t actually be discussing the story of DMC 5.

Devil May Cry 5 is a grand return to form for the action franchise, I gave it Twinfinite’s highest score possible, and it’s just about everything fans could have wanted. Just about.

The action is slick and intuitive, the aesthetic and graphical style are amazing, and the characters are just as fun as ever. Yet for everything Devil May Cry 5 does right, there are a few areas it still manages to fall short, namely, in how it uses its female characters.

Trish and Lady have been in the Devil May Cry series for years, with Trish being introduced in the very first game while Lady made her debut in Devil May Cry 3. Dante’s always been the star, but the two leading ladies have always been forces to be reckoned with on their own.

That’s exactly what makes their role so disappointing in Devil May Cry 5, as they’re treated as nothing more than plot devices who simply sit on the sidelines after being saved by Dante and Nero.

To make matters even worse, a large percentage of their screen time is spent without clothes on, something that feels completely pointless, and exists just for fanservice. It’s a wasted opportunity because they are formidable characters in their own right and it’s a huge letdown to not see them in action.

This is something that the next Devil May Cry can fix, and there’s already the perfect setup.

After the events and credit roll of Devil May Cry 5, we’re treated to a scene of Trish and Lady returning to the Devil May Cry agency, where they’re paid a visit by Morrison. Long story short, Morrison tells the two he has a job for them, and boom, there’s the setup for your next Devil May Cry game: a “buddy” game starring Trish and Lady.

By buddy game I mean something along the lines of Uncharted: The Lost Legacy, one that has the two traveling together kicking demon ass, and letting you play as both characters.

Devil May Cry 5 showed that the two have a fun dynamic, constantly harassing each other, even while they fight and cooperate. With strong writing to back it up, this dynamic could be fleshed out even more, and it’d be interesting to see them develop a relationship separate from the fact that they simply know Dante.

It’s sad to say that Devil May Cry has never had the best female representation, despite having great female characters. Time and again, female characters in the series have only existed as motivation for Dante, or as someone for him to save.

Even looking back at the very first Devil May Cry, Trish is literally a plot device tied to Dante’s memories of his mother. She definitely has a lot more to do in the first game, but the same idea prevails, that she only exists because of Dante. It’s time to move past that.

We desperately need to see these characters and who they truly are on their own outside from their connection with Dante or another male character.

Now might even be the time for the franchise to introduce full co-op, letting you partner up with a friend to play through Trish and Lady’s story.

We already had the chance to play as both Trish and Lady in Devil May Cry 4: Special Edition, and their moveset differed nicely from that of Dante and Nero.

If Capcom really doubled down on developing both characters, and put the same amount of care into their gameplay that they did into Devil May Cry 5, it’d be a blast.

Considering how each character fights, it encourages a co-op system even more. Lady is more of a ranged fighter, that can hang back and use Kalina Ann and other weapons, while Trish gets up close and personal with a wide array of devastating sword attacks. The setup seems perfect, honestly.

While Trish and Lady have both appeared in multiple games, neither character has ever really been given their time to shine, and it’s about time that changed. With Nero now taking up the Devil Hunter mantle, there’s plenty of opportunities for other characters to step into the spotlight.

Dante and Vergil have had their fun, now it’s time for Trish and Lady to get their dues.