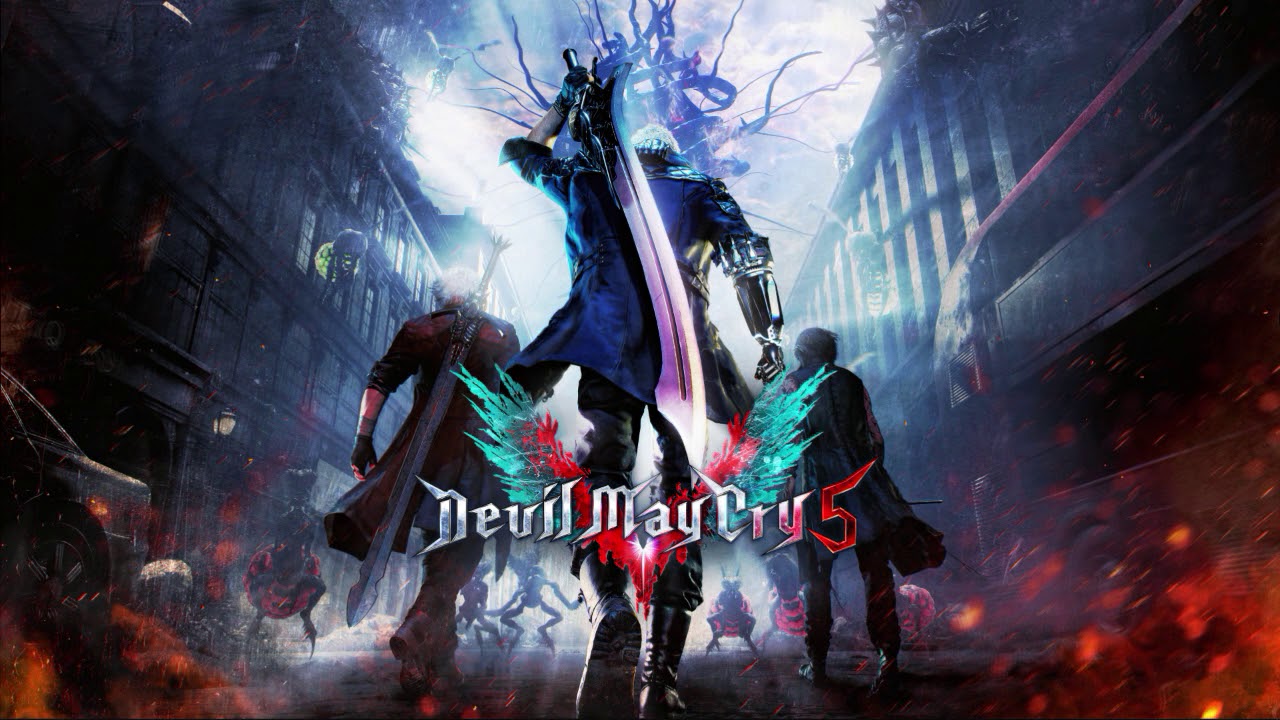 Devil May Cry 5 on Xbox One

During the final hours of Devil May Cry 5, I started to notice a trend. Time and again I’d end a boss battle or combat encounter and go, “Wow, I can’t believe I just did that.” It’s a game that excels at making you feel cool in every possible way it can, and it has everything you could want from a good Devil May Cry game; it’s just that it all looks prettier than ever before.

From the very opening segment, Devil May Cry 5 makes it abundantly clear what kind of game it’s going to be, one that doesn’t give a damn about how ridiculous, corny, and over-the-top it is. That fact stays true the entire experience, and everything from the one-liners its protagonists spout to the absurd motorcycle swords Dante gets supports this idea.

Devil May Cry 5 takes place the furthest along in the series’ timeline that we’ve seen yet, picking up after the events of Devil May Cry 4. Dante and Nero are both drawn into a new mission when a mysterious man named V approaches them, saying a powerful demon is about to appear in Red Grave City.

The story of Devil May Cry 5 is relatively standalone, and you don’t need to have played past games to get into it. However, there’s an enormous amount of references and characters that pop up for a bit of fanservice.

The voice cast generally does a great job , and the new pair of Nero and the mechanic Nico have particularly great chemistry that makes for some genuinely funny moments.

As Nero, Dante, and V head to investigate the situation in Red Grave City, you’ll play as all three in various missions, sometimes choosing which character to play as. While Devil May Cry 5’s story is certainly a treat for longtime fans, with a few twists and turns, gameplay is really where this latest entry shines.

The franchise has always prided itself on “Stylish Action,” and that term has never been truer than with Devil May Cry 5. The basics of combat remain the same as past games, you use various light and heavy attacks, ranged attacks, special attacks, and more to take down hordes of enemies.

What I found most surprising about Devil May Cry 5, however, is just how different all three of its playable characters feel. These are three wildly different experiences packed into the same game, and each one is an absolute blast.

Nero comes equipped with his Red Queen sword, which he can rev up to increase its power, and his Blue Rose gun, which he can also charge up for a heavy blast. The big change for him this time is Devil Breakers, mechanical arms that Nero equips that have ridiculous and fun effects.

For example, the Punch Line arm lets you send it out like a heat-seeking missile, while the Overture one sends out a powerful blast of electricity straight ahead. These Devil Breakers add incredible variation to Nero’s moveset, and coupling this with his grapple ability gives you a wealth of deadly combinations.

Combat in Devil May Cry is blindingly fast, and you need to be on your toes at all times to keep up with the action and enemy’s attacks. Even if this game had Nero alone I’d be more than satisfied with the experience, as it’s mind-blowingly fun to string together all of these disparate attacks, and the game’s silky smooth animations give everything an anime-esque vibe.

There are few things more satisfying than executing a perfectly timed dodge only to loop multiple enemies into a lengthy combo and see that SSS rating pop on your screen.

As for the series’ main protagonist, Dante, he sports a combat style similar to that of DMC 3 or 4. He has four different styles he can swap between (Trickster, Gunslinger, Swordmaster, and Royal Guard) each of which have special skills mapped to the B button. On top of this, he can have up to four ranged and melee weapons that he can swap between, mapped to the left and right trigger respectively.

Dante has, by far, the most diverse moveset and the amount of options available can be simply staggering, which is why you won’t control the character until later on in the game.

Still, this results in Dante perhaps being the most fun character to play as, since you can really build your own definitive style and adapt to so many different situations. The Devil Trigger mechanic of past games returns, letting you soup up Dante’s attacks with an ultra-powerful, and flashy, animation.

Where things really get shaken up, however, is with V, the brand new addition to the series’ cast. This mysterious figure’s role in the story is revealed as time goes on, but his moveset is a far cry from anything else in the DMC series. V can’t actually attack himself but relies on three different demon familiars to attack.

The X button controls a ranged bird demon named Griffon, Y controls a close-range panther named Shadow, and his Devil Trigger calls in a hulking behemoth called Nightmare. You hit these attacks buttons and move V around independently, and Griffon and Shadow also have their own health bars.

Nightmare, on the other hand, is controlled by AI, unless you mount it, and calling in the behemoth is always hilariously over-the-top as he crashes down like a meteor onto the battlefield, or plows through a nearby wall spraying bricks everywhere. Calling Nightmare in certain areas can even lead to discovering new areas as it opens up new pathways.

This makes V’s combat more focused on resource and space management, as you really have to have a feel for the general flow of the battlefield, and where enemies are. It’s an interesting system that really shakes up the way you think about DMC combat, but still has the intensity and pace of Nero and Dante’s battles.

V is definitely the weakest of the three’s combat systems, but he’s not bad by any regards, and his missions work well to shake up the pacing and give you some variation. All three of these characters have a wealth of different moves and abilities to unlock, so much so that you’ll still be unlocking things well past your first playthrough of the game.

All of these customization options help diversify the game’s combat even more, and give you more options for creating your own play style.

By the same token, Devil May Cry 5 does a great job of consistently introducing new enemy types that bring different tactics and challenges to battle, and nearly every single mission in the game introduces some new enemy.

To top this off, Devil May Cry 5 has, what I personally think, are the best boss battles in the entire series. The standard battles definitely get challenging later on, but boss battles are where things really get in your face.

Each boss feels unique, and they all bring serious challenges, peppering you with a wealth of attacks, both ranged and close up. These bosses culminate in a phenomenal final sequence of battles that really challenge your skills as a player, especially if you’re on higher difficulties.

Difficulty, in particular, has always been a selling point of the DMC franchise, and something that die-hard fans really enjoy. However, this had led to past games being a bit inaccessible to newcomers, though that’s something that Devil May Cry 5 addresses as well.

You start with two difficulties, Human and Devil Hunter, and as you beat the game you can unlock more. And yes, the popular difficulties of Dante Must Die, Heaven and Hell, and Hell and Hell do return.

Human is the most approachable difficulty, and a feature called Auto-Assist also helps ease newcomers into the experience. If you don’t want to bother with stringing complex button presses together, you can turn on auto-assist at any time and the game will automatically build combos for you with just one button press.

It’s definitely simplifying Devil May Cry 5 down to its absolute roots, but it’s a good option to have there for players that might struggle with the complexities of the game’s combat.

There are very few flaws that I can even find with Devil May Cry 5, and those don’t even seriously detract from the game.  A visual lack of diversity in environments is a little disappointing, and while the soundtrack is generally good at setting the tone, the other battle themes pale in comparison to Nero’s “Devil Trigger.”

There’s also a baffling online function that’s never properly explained. A feature called Link Missions lets you connect with other players, but the game never really explains what this system does or how it works.

Basically, you’ll just be connected to other players and simply be able to see them playing through other parts of the game while you’re in certain missions. At the end you can rate them as “Stylish” and they can do the same for you, which leads to both players being rewarded with Gold Orbs, which can revive you when you die.

Ultimately, the system has little to no effect on the core game, as Devil May Cry 5 is still very much a single-player experience.

The camera is surprisingly not an issue for most of the game, as it pulls in close while you’re exploring but dynamically zooms out during battles. It’s easy to control, and there were only a handful of times I had a problem with the camera getting stuck on something. This is definitely a good thing for an action game as intense as this.

Words really don’t do justice to how stylish of a game Devil May Cry 5 is. It’s an adrenaline-pumping experience that consistently left me blown away by an awesome combo I did, or a particularly ridiculous cutscene.

It’s certainly a gorgeous game, built on the same RE Engine used in the Resident Evil 2 remake. I’d even go as far to say as Devil May Cry 5 is a better-looking game than RE2, simply because of the gorgeous particle effects, and the fact that no matter how intense the action got, the game always ran without a hitch or framerate hiccup.

Devil May Cry 5 has some of the best combat I’ve ever experienced in a character action game, and it’s amazing how well the game builds everything to try and make the player feel like they’re doing incredible things, simply reinforced through stylish animations, easy to chain combos, and a dynamic music system that pumps things up as you get higher style rankings.

The wait between Devil May Cry 4 and Devil May Cry 5 might have been long, but the payoff is more than worth it. It doesn’t deviate from the series’ formula, but instead refines it to a polished sheen; one that’s packed with an absurd amount of style and spirit. This is a must-play action game for fans of the series and the genre alike.