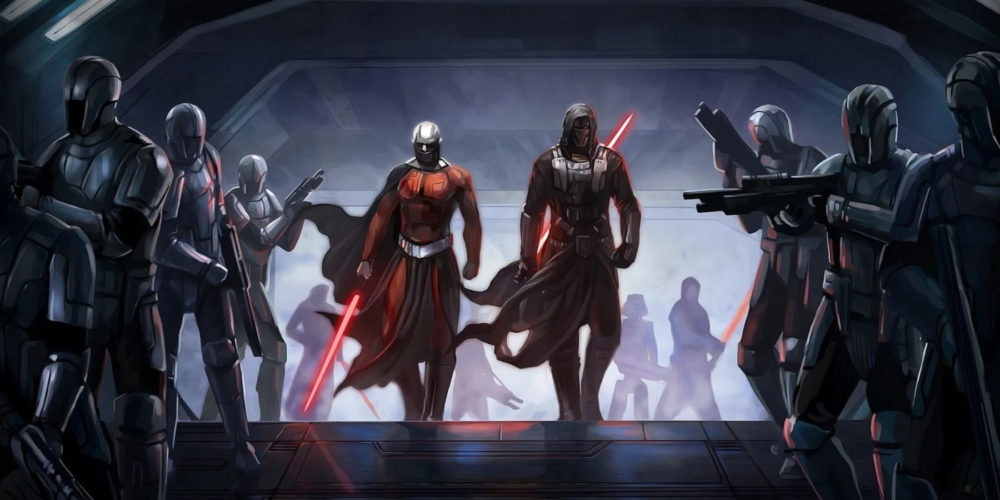 This past weekend at Star Wars Celebration we learned about quite a few new projects, including the first trailer for Episode IX, our first look at the new game Jedi Fallen Order, and a behind the scenes look at the Mandalorian. However, it seems Lucasfilm may have even more in the wings if comments from president Kathleen Kennedy are to be believed.

Talking to MTV in an interview, Kennedy was asked if there were any plans or ideas for the popular Knights of the Old Republic subseries, originally started by the 2003 BioWare video game of the same name.

Kennedy answered saying “You know, we talk about that all the time. Yes, we are developing something to look at. Right now, I have no idea where things might fall, but we have to be careful that there is a cadence to Star Wars that doesn’t start to feel like too much. We don’t have a crystal ball, you know, we tried a little bit with ‘Solo’ to see if we could do two movies a year and whether or not there really was an opportunity for that, and we felt that’s not going to work. So, we back off of that a little bit. But it doesn’t mean we don’t think about lots of different stories, because that’s the exciting thing about this universe.”

You can see the full clip down below via MTV’s Twitter. Although Knights of the Old Republic has remained mostly in the realm of games, it has spread to a few different comic books and novels as well.

#Lucasfilm president Kathleen Kennedy talked to us about the future of #StarWars – including a Knights of the Old Republic movie and female filmmakers taking the helm, as well as Palpatine’s surprise return in the trailer for @StarWars #EpisodeIX pic.twitter.com/HCjEhdlRv7

The subseries puts things far in the past of the Star Wars franchise, dropping players right into the middle of a massive war between the Jedi and Sith.

Other news hit Knights of the Old Republic recently as well, as the MMO The Old Republic will get its first new expansion in years, titled Onslaught. The expansion will introduce a host of new mechanics, areas, and planet, including Corellia, the homeworld of Han Solo.

Consider the flood of Star Wars content incoming and recent comments that the films would be taking a “hiatus” after Episode IX, it seems unlikely that we can expect anything from Knights of the Old Republic soon. Still, it’s interesting to know that something seems to be in the works.

What would you like to see Lucasfilm develop for KOTOR? A TV series, or a movie? Maybe even a brand new KOTOR game? Leave a comment below and let us know what you think.