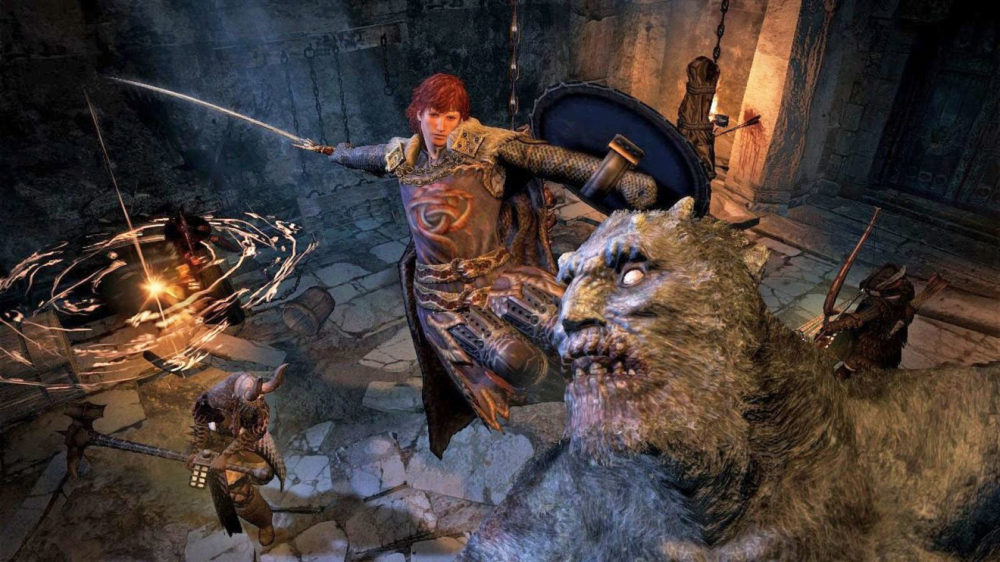 With Capcom releasing Dragon’s Dogma: Dark Arisen on Switch, I feel like the ultimate western RPG prophecy has been fulfilled. With Skyrim on one hand, and Dragon’s Dogma on the other, it’s literally impossible to ever feel bored when you’ve got your Switch in your bag.

So, a couple of things to note with this brand new Switch port: this is very much a complete version of Dragon’s Dogma, packed with the Bitterblack Isle side content, along with Speed Run Mode. And yes, the Pawn system is still intact, and it’s available even to players without a Switch Online subscription.

As always, it never ceases to amaze me when I observe how good these large, open world games look on the Switch. The first thing that struck me was the impressive graphical fidelity of the game in handheld mode. If you’ve played the game on PC, you’ve likely messed around with mods that improved the lighting, so you won’t be surprised to know that the Switch version does look a little murkier and duller in comparison.

Considering that’s how the game’s always looked on consoles, though, we can’t really complain too much. What was noticeable, however, was that the character models looked significantly less detailed when compared to docked mode.

Whether it’s during cutscenes or if you’re just staring at your character’s face when you’ve got camera control, it’s pretty obvious that this where the graphical downgrade between docked and handheld modes has hit the hardest. Not really a deal-breaker, especially when the environments and the world of Gransys looks gorgeous.

Most of my time with the game was spent in handheld mode, and it quickly became apparent that Dragon’s Dogma might not necessarily be suited for long hours of play in this fashion. With how small the Switch’s analog sticks are, it’s not always easy to direct your character towards an opponent to execute a skill quickly and fluidly. Just like in Doom (without gyro aiming), trying to land precise arrow shots on an enemy wasn’t particularly pleasant either.

That aside, the aforementioned Pawn system is still intact here, but with some very minor changes. For starters, you’ll still be able to share Pawns online and recruit them from other players. If you’ve got a friend’s Nintendo ID, you can also exchange IDs to recruit each other’s Pawns.

The main difference is that the Switch version no longer allows you to send Pawns back with gifts or comments to the other player, which isn’t a big deal, but it certainly takes away some of the initial charm of the game. Still, being able to make use of the system without an online subscription is very convenient.

Dragon’s Dogma’s combat continues to be every bit as deep and involved as you’d expect it to be, with multiple vocations for you to experiment with, and a good ton of bosses to cut your teeth on.

As I spent more time with the game, I found myself thinking of it as the perfect complement to Skyrim. Whereas Bethesda’s epic open world adventure was more about getting to know the NPCs and exploring its gigantic universe, Dragon’s Dogma is much more micro in scale, with a larger focus on combat.

Dragon’s Dogma features a much more cumbersome fast travel system, which truly encourages you to take the time to explore the details instead of zipping around everywhere like you normally would in Skyrim. The in-depth combat and monster hunting system is also designed the way it is to facilitate a more intimate experience where you’d take your time to learn each foe and how to tackle them.

To this day, Dragon’s Dogma still stands out as one of the best new IPs from Capcom, and it’s definitely a shining gem to add to the Switch’s ever-growing RPG library.