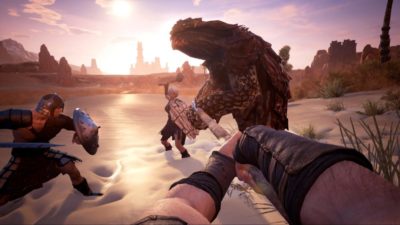 How to Save Your Game in Conan Exiles

Conan Exiles may have released less than a year ago, but it has recently been made available for free to PS Plus subscribers in April 2019. It can be a tricky game to get your head around, though. Here’s everything you need to know about how to save your game in Conan Exiles.

How to Save Offline

First things first, saving in Conan Exiles is pretty simple if you’re playing offline single-player. There’s no manual save option but, as you explore the world, the game will save your progress automatically every few minutes.

When you exit the game and jump back in, you may have lost a little bit of progress due to when it chooses to save, but you shouldn’t lose a lot. To minimize what you lose, though, try to save your game by using a bedroll or quitting after using a bed. Online, however, is a bit different.

Ever since Conan Exiles first launched, players have been complaining that they’ve had to make a new character after playing, quitting the game, and then jumping back in. While it’s frustrating, there’s a reason behind that.

Your character and data is saved to the server that you start on, so you would need to return to that server to pick up where you left off. It’s not immediately made clear, but there’s a way of telling which server you need to join to ensure that you save your game.

When you’re picking which server to join from the list when beginning the game, you should see a little star to the left of one that’ll be near the top of the list. This indicates the game favoriting a particular server so that you know which you’ve used previously.

Simply join that Conan Exiles server, and you should be back to where you were when you last played, with the same character.

That’s everything you need to know about how to save your game in Conan Exiles. For more tips and tricks on the game, be sure to search for Twinfinite.

Comments
Continue Reading
Related Topics:conan exiles, How to, progress, ps plus, ps4, save