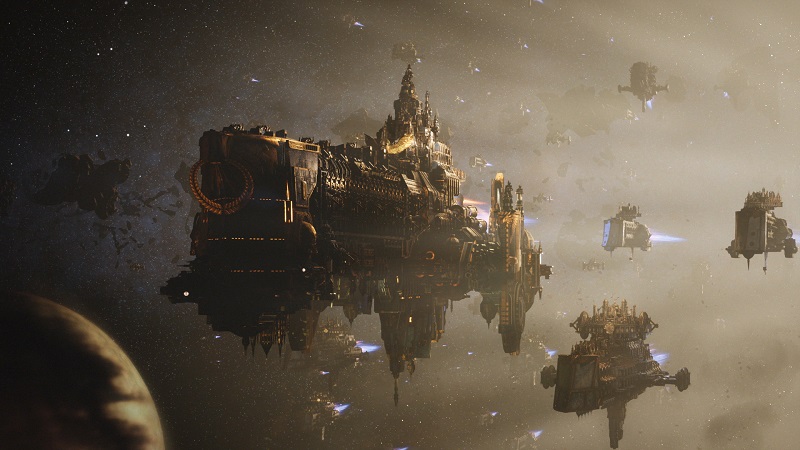 Known as the Massive Fleet Update, this is a new addition that was teased back in March when the developer revealed the post-launch roadmap for Battlefleet Gothic: Armada II. Specific details were scarce back then but now it’s clear that “Massive Fleet” is a very apt description for this update.

True to its name, the update adds a new game mode called Massive Fleets that significantly increases the size of the fleets in single-player skirmishes and 1v1 battles. Namely, players now have up to 4,000 points to play around with while building their fleets, as opposed to the 1,200 points that were available before the update.

In addition to being able to bring a lot more vessels to battle, players can now also add Titan ships to their fleet for the very first time. Titans are massive ships like the Imperial Phalanx and the Tyranid Ancient One that were previously only available in the campaign.

The developer warns that the Massive Fleets mode is not yet balanced and that the addition of Titan ships is primarily aimed at making battles more fun and over-the-top. Competitive players looking for a balanced experienced should still stick to Battlefleet Gothic: Armada II’s ranked play mode for the time being.

According to Tindalos Interactive’s post-launch roadmap, the next major feature that will be added to Battlefleet Gothic: Armada II is a brand new grand campaign. There’s no set release date for this new campaign just yet but the developer says players can expect to hear more about it “in the near future.”

Battlefleet Gothic: Armada 2 can be a very intimidating game for new players so it’s better to bring a friend along if you’re thinking about tackling this space RTS based on the Warhammer 40K universe. If you’re not sure where to get started, make sure to check out our guide on how to play the game’s co-op campaign with a buddy.