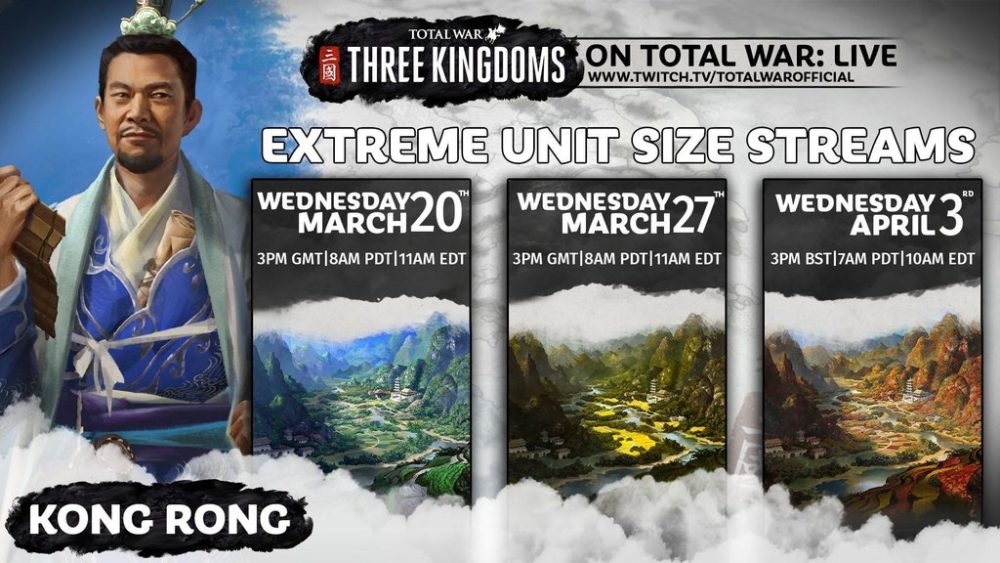 Creative Assembly has shown off the first Total War: Three Kingdoms gameplay with units set to the new extreme size during a livestream on YouTube and Twitch. The extreme unit size setting is 50% larger than ultra, the previous largest setting, and is sure to push graphics cards to the limit once the strategy game releases in May.

Set during the Three Kingdoms period of China, the newest Total War title will display the combat of the era on a scale unprecedented as yet in strategy games. The new extreme setting will have a standard infantry unit consisting of 240 soldiers, and cavalry consisting of 60. With 21 units to an army and the possibility of 4 armies clashing at once, you are looking at conflicts consisting of up to 20,000 soldiers, all intricately detailed and lovingly mo-capped.

While epic, real-time engagements are the hallmark of the Total War series, this new sense of scale is particularly fitting for the time period. The battles featured in the real-life Romance of the Three Kingdoms, which is as much historical text as it is nationalist fiction, were titanic and featured numbers that wouldn’t be seen in the West until the Napoleonic Wars, some 1500 years later.

The live-stream is played from the perspective of Kong Rong, who leads one of the game’s playable factions. As a scholar, his focus on trade and diplomacy is a change of pace from the traditional Total War experience, which as the name implies, is generally played from a more militaristic standpoint.

In the lead up to launch, Creative Assembly has been releasing a steady stream of gameplay footage, playing in both the Records (the traditional historical gameplay) and Romance modes (a more fantastic reimagining of events).  The recently released Dong Zhuo gameplay footage, in particular, is a standout, showcasing a more tyrannical style of play.

Be sure to check out the stream for yourself, the first battle kicks off around the 17-minute mark if you want to see the scale that will be on offer. Total War: Three Kingdoms releases worldwide on PC, May 23.