When Square Enix announced Left Alive, I was absolutely pumped. We were going to get a new Front Mission game directed by the producer of the Armored Core series, with character and mecha design by the artists behind the Metal Gear Solid series. What could go wrong?

As it turns out, a whole lot of things.

The story of Left Alive is perhaps its best element: in the world of the Front Mission series, skirmishes and local conflicts are extremely common, and we find ourselves right in the middle of one of them.

As war erupts between the small countries of Ruthenia and Garamoniya, the border city of Novo Slava suffers a surprise invasion, catching both civilians and soldiers in the deadly crossfire.

The Ruthenian army is swiftly crushed, and three survivors including a police officer, a Wanzer pilot, and a convict, find themselves stranded behind the enemy lines, and decide to fight back.

The narrative is quite enjoyable, with interesting characters and situations, which could be defined as pretty much one of the few elements in the game that are worthy of the Front Mission legacy. 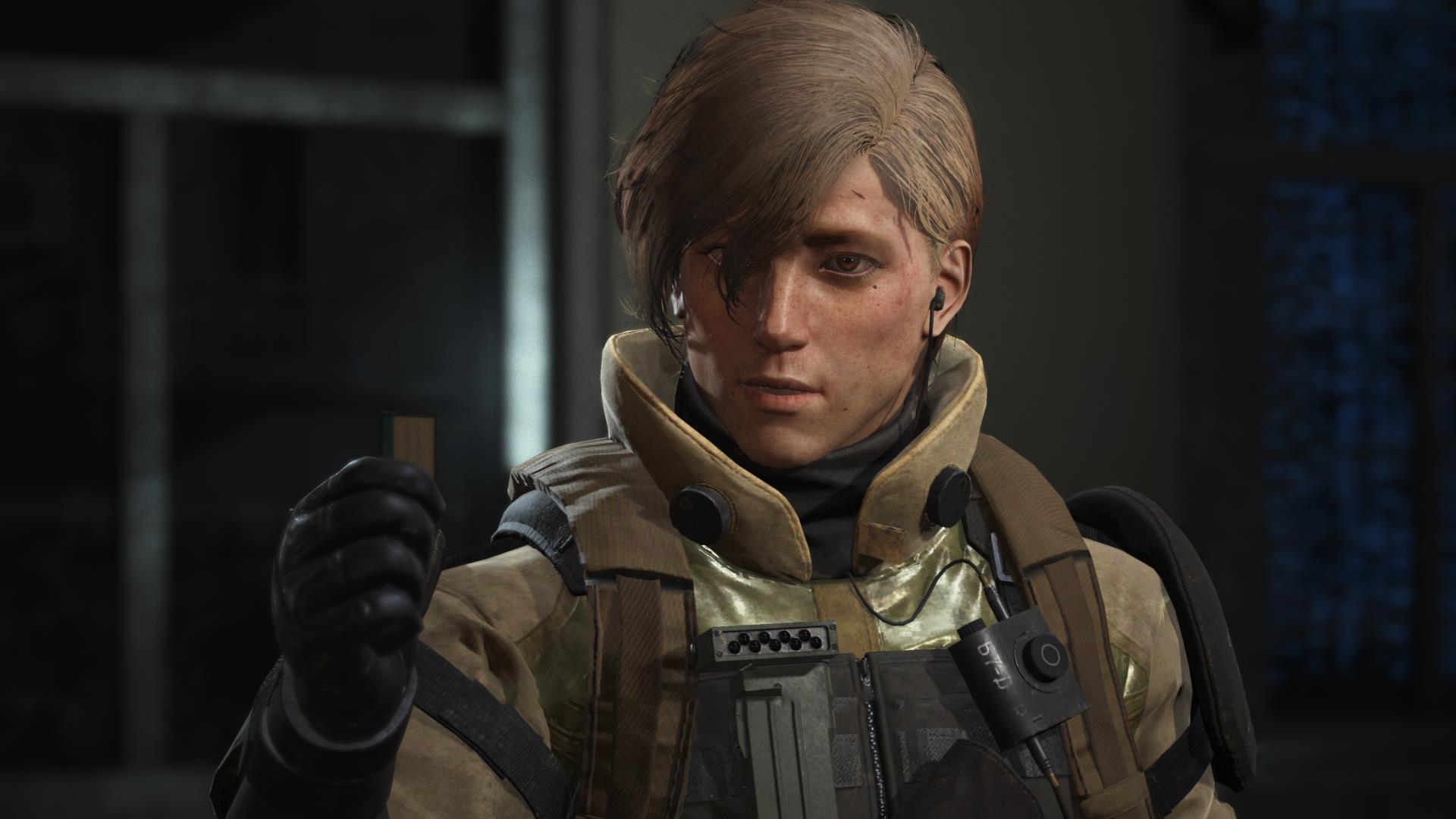 War is depicted with ruthless brutality and Left Alive certainly doesn’t pull many punches, creating a dark and hard-hitting setting that sci-fi and thriller fans most probably will enjoy. That being said, this requires managing to look beyond the game’s many issues.

The other absolutely fantastic element that contributes to making the experience a bit more enjoyable is the art. Both the character design by Metal Gear Solid veteran Yoji Shinkawa and the mecha design by Takayuki Yanase (whom you may know from Metal Gear Solid 4, Xenoblade Chronicles, and Gundam 00) are really top-notch, helping both characters and Wanzer shine.

Unfortunately, the technical translation of Shinkawa-sensei’s style into 3D models isn’t always spotless, and the often-rough animations don’t help much either. Luckily, this isn’t bad enough to overshadow the hand of the artist.

That being said, the rest of the visuals are acceptable but not exceptional, with often dull environments that fall short of what we would expect so close to the end of this generation, effects that tend to feel unpolished and at times even unfinished, and generally mediocre use of hardware resources. I played the game on PS4 Pro, and while I could easily forgive average graphics coming from a smaller developer, Square Enix should be able to do better. 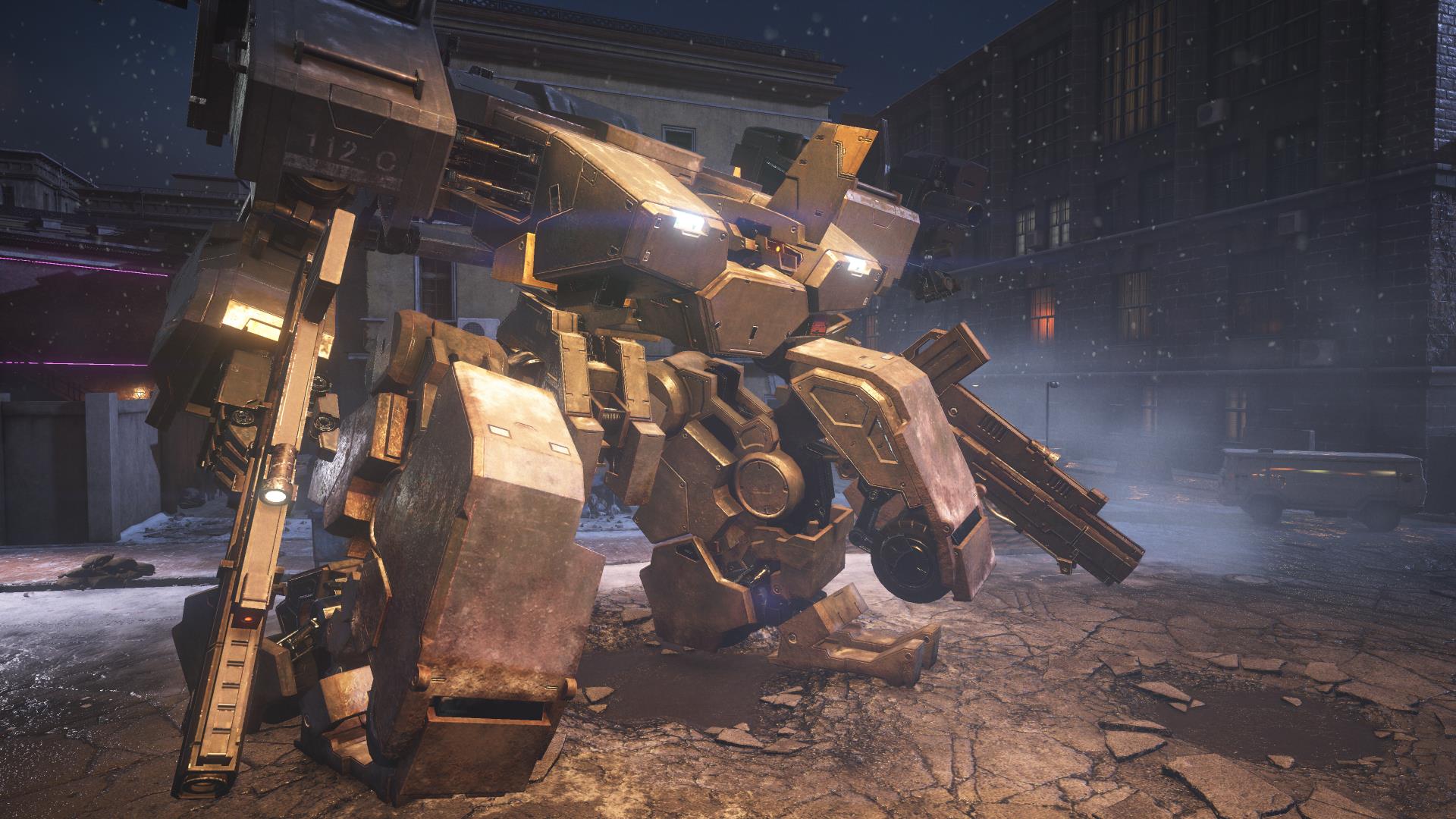 On the other hand, the soundtrack is quite good, and I found myself appreciating most of the tunes accompanying the action (or lack thereof), also serving to enhance the already enjoyable storytelling. On the other hand, voice acting isn’t anything to call home about, with only the English track offered, which is a rather puzzling choice for a Japanese game.

The action is extremely unbalanced towards stealth and crafting aspects, and ends up being very slow and uninteresting most of the times.  Don’t get me wrong; I actually love stealth games, but they require careful balancing and interesting enemy patterns to be fun.

On the other hand, Left Alive’s enemies feel either completely dumb or like they can see through walls and obstacles from the other end of the level. In a game that supposedly is almost completely based on taking complete control of the battle through stealth and careful planning, the spotty AI turns the whole experience into an exercise of frustration.

Too often I found myself doing something that should have worked and it didn’t, or making a mistake that should have put me in deep trouble, but was miraculously overlooked by the opposing force. 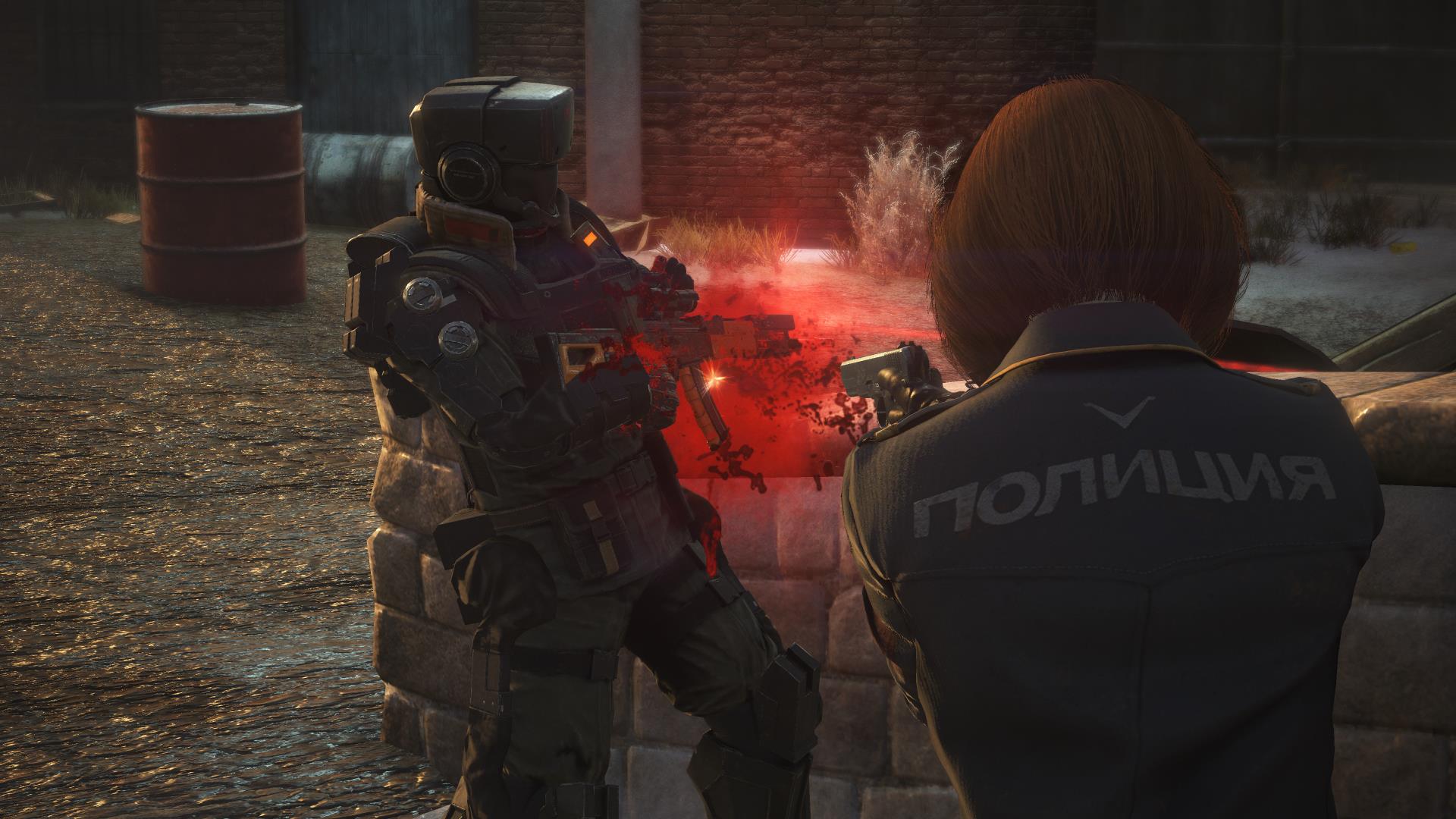 This irremediably ruins the stealth gameplay, and things get even worse due to the fact that enemies are extreme bullet sponges and nearly perfect snipers, turning gunfights into another source of annoyance rather than adrenaline.

The game justifies the resilience of AI soldiers with their armor, and this would have worked very well if the stealth mechanics weren’t so flawed. With good stealth gameplay, it’d be an appropriate penalty for getting caught, but unfortunately, the hide-and-seek feels quite unfair most of the times. Add to that the fact that (at least on standard difficulty) the playable characters are pretty much bullet sponges as well, and getting spotted creates situations worthy of the Benny Hill Show.

Sine this still is (somehow) a Front Mission game, at times you get to take control of a Wanzer. While these sections tend to feel a lot better than the rest (let’s be honest, we’re all here to pilot robots), battles feel overly streamlined, lacking the depth you would expect from a full-fledged mecha game.

Personally, I have a theory. I feel that whoever at Square Enix devised this game wasn’t really trying to revive the Front Mission series. It seems like someone noticed that Konami left a big gap in the market due to the lack of a proper Metal Gear Solid game, managed to sign the artists who worked on the series and only then set out to find an IP that could somehow be shoehorned into this Metal Gear replacement. 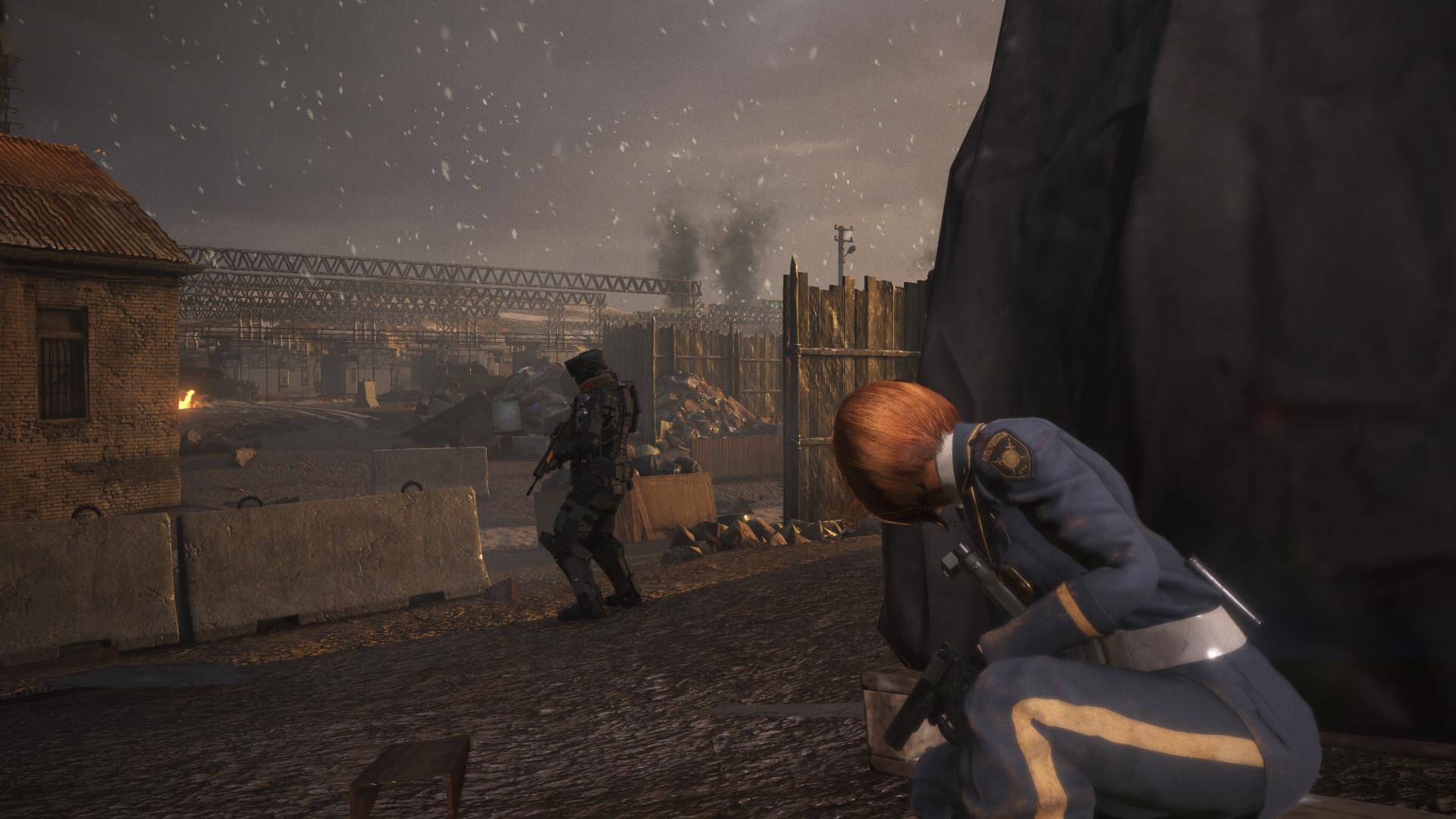 The Front Mission franchise was available and more or less fit the bill, so the development team was tasked to make this Metal Gear Front Mission instead of a proper new game that actually fit what the fans of the series have wanted and begged for over many years.

Unsurprisingly, the parts of the game which are less influenced by this choice (story, art, and music) are also its most enjoyable elements, while pretty much everything else feels out of place.

This is certainly not the Front Mission game that fans want, and I am rather positive that even the good folks at Square Enix know this all too well.

Writing this review is genuinely painful for me because it feels like I’m hammering nails in the coffin of the franchise. I honestly hope that Square Enix won’t interpret the poor reception as lack of interest for a true Front Mission game.

Left Alive’s half-baked nature feels like a real pity because quite a few elements of the game are actually really interesting. I really enjoyed the alternating points of view of the three protagonists and the idea of rescuing civilians and having my choices influence their personal stories. They would have been much better received if implemented as part of an experience that feels less disjointed and unpolished. 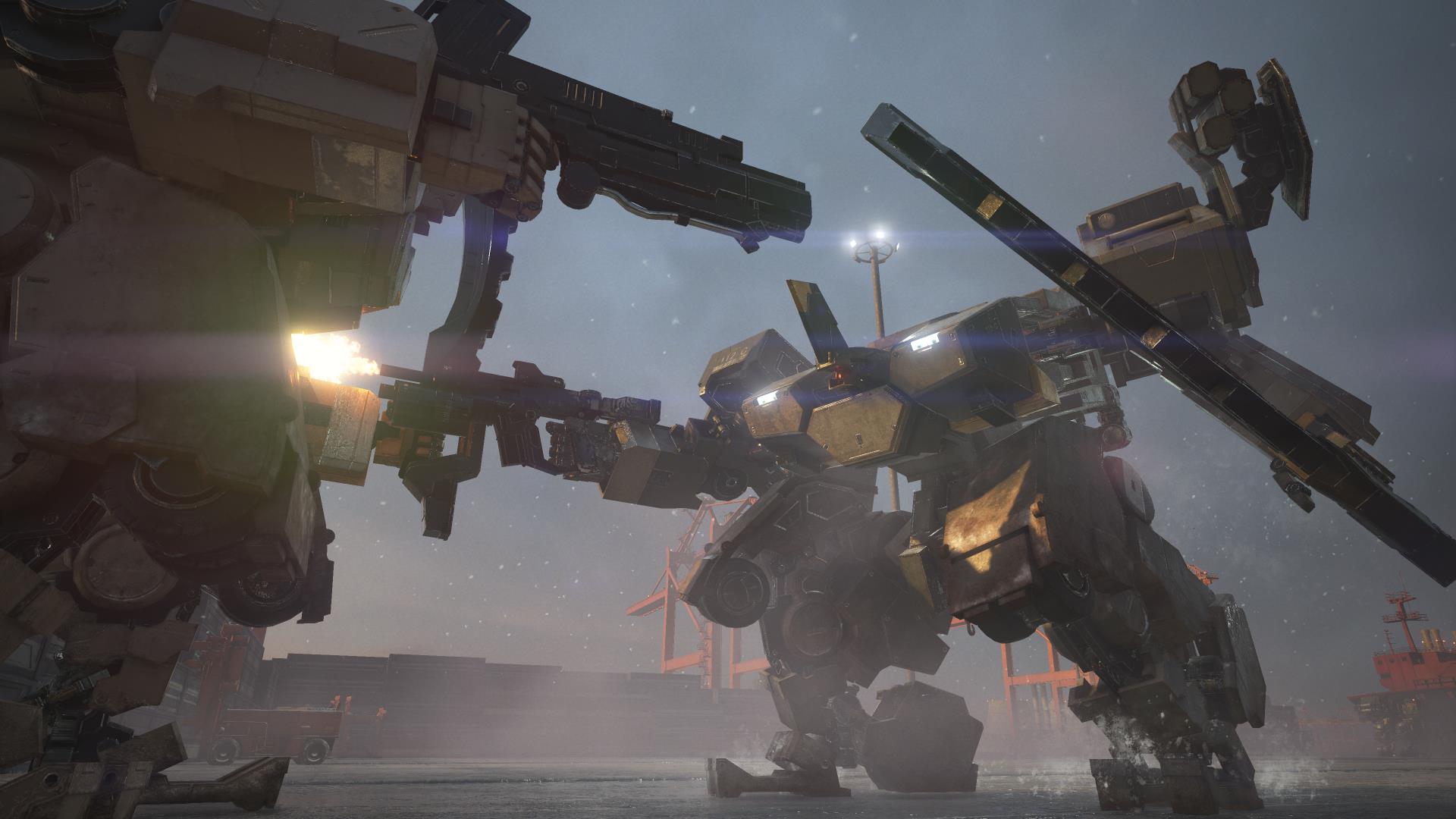 Ultimately, the Front Mission series deserves a real, full-fledged mecha game, and I am honestly confident that Toshifumi Nabeshima and his team could pull it off by sticking to the Armored Core roots and shedding the mediocre stealth gameplay. Alternatively, they could reverse the balance by turning the mecha gameplay into the main course, and stealth into the rare diversion, after polishing its mechanics. Add to that Yoji Shinkawa and Takayuki Yanase’s art, call it actually Front Mission, and it’d have some real potential.

If Square Enix doesn’t want to give us a turn-based Front Mission, that’s fine. I’d be perfectly okay if they made an action game like Front Mission Evolved (Yes. I am aware that many fans of the series are hating me right now). Action gameplay wasn’t its problem. Quality was the issue and a proper action-based Front Mission game with high-level production values, great art and music, and the Armored Core pedigree not hindered by extraneous elements would be awesome.

I really hope that the development team gets that chance.