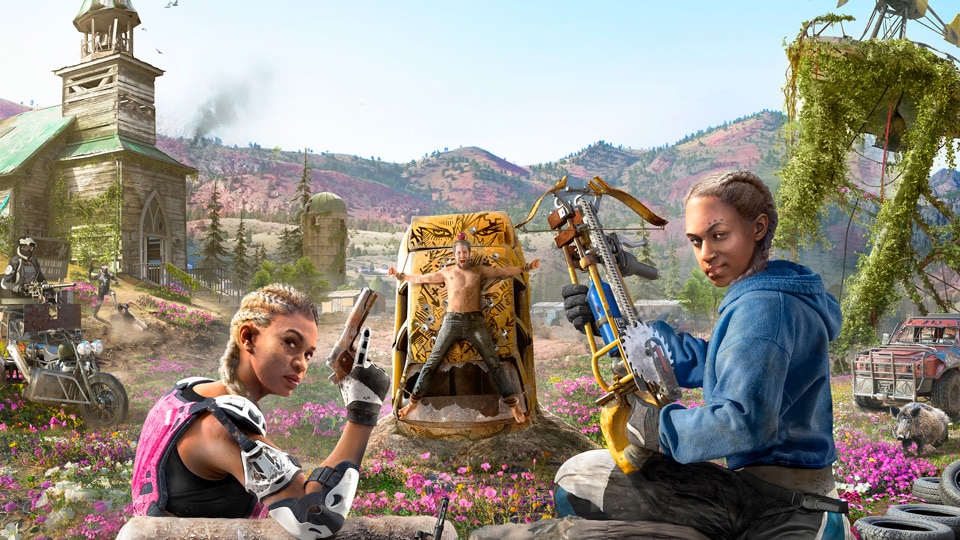 In a nutshell, Far Cry New Dawn is like that unnecessary sequel or spin-off you were initially excited about, but quickly realized that maybe the original material was good enough without any addendum.

It’s like you know how it was really exciting when we learned there was gonna be a Fantastic Beasts movie that would give us an opportunity to revisit the Harry Potter world, but then it fell completely flat when you actually watched it? Playing Far Cry New Dawn feels like that.

To business, first. New Dawn takes place many years after the ending events of Far Cry 5, when a nuke randomly dropped on the whole world and destroyed everything, and only Joseph Seed and the Deputy were left alive.

Far Cry New Dawn picks up the story after that, and gives us a look at how Hope County has improved and deteriorated since the events of that fateful day.

At first, it’s intriguing. You play an unnamed character who journeys to Hope County in an effort to help rebuild the place. However, things don’t go as planned, as they never do, and your entourage is waylaid by the Highwaymen.

These are a group of anarchists and bandits who operate under the leadership of Mickey and Lou, twin sisters with a penchant for violence and chaos, as Far Cry villains usually are.

Some crazy stuff happens, and before you know it, you’re reunited with Carmina Rye and a small group of good guys holed up at a camp called Prosperity. Your mission, should you choose to accept it, is to gather specialists at Prosperity, rebuild the camp, and drive the Highwaymen out of Hope County.

The map in Far Cry New Dawn is a little smaller than Far Cry 5, as most of the area is just irradiated wasteland at this point, but you’ll still get to visit a few familiar locales. Everything in New Dawn revolves around this strange base-building aspect that the game seems so hell-bent on pushing on to you.

Prosperity features a total of seven camp facilities, each with three upgrade tiers. Upgrade the Infirmary, for instance, and you’ll increase your max health. Upgrade your Workbench, and you’ll be able to craft better weapons. And how do you upgrade your facilities? With a new resource called Ethanol.

Instead of allowing your character to level up in the game, much of your progression revolves around scavenging the world for resources and upgrading your camp in order to get stronger. You still get perk points to purchase useful abilities from the skill tree, but you have to pay attention to Prosperity if you want to make any real progress.

This normally wouldn’t be such a bad thing, but so much of New Dawn revolves around this upgrade process, and the fact that obtaining Ethanol isn’t exactly the easiest thing to do at the start of the game can make it feel like a slog.

Even after you’ve finally scraped together enough Ethanol to upgrade the Workbench and get that Rank III assault rifle you’ve been eyeing for so long, you’ll still need to make sure you’ve got the crafting materials to actually make it.

Thankfully, crafting materials are pretty plentiful, as long as you’re regularly looting your explored areas, but obtaining the high-end parts might require you to do a little farming as well.

Thankfully, the basic gameplay of Far Cry New Dawn is still as fun and enjoyable as it’s been for the past few years. While there are fewer outposts in the game, their layouts are still diverse enough to keep things interesting. It’s still fun to sneak around an outpost, using binoculars to tag enemies, and stealthily killing everyone with a badass bow.

New Dawn also introduces Expeditions, which are cool side missions that you embark on to get better crafting materials. Taking on an Expedition will drop you off at a completely separate location from the map, where you have to infiltrate an enemy base to retrieve a package, then get to the extraction zone as quickly as possible.

The levels here are generally pretty well-done, allowing you to explore interesting locales like an abandoned theme park and a hot desert land. These missions, along with outposts, are replayable as well, but they’ll go up in difficulty, and also give you greater rewards.

Guns for Hire also make a return, featuring some familiar faces like Pastor Jerome and Nick Rye. If you’re expecting some sort of heartwarming reunion with these characters and a solid explanation on how exactly they survived that nuke, though, you’ll be disappointed.

Which brings me to my next point, the weird-ass story in Far Cry New Dawn.

The Far Cry games have always had an element of weirdness to them, but New Dawn just seems to go completely off the rails with the somewhat grounded story that we got in Far Cry 5.

All of a sudden, the religious themes from Far Cry 5 have been completely discarded in favor of some hackneyed cult that doesn’t seem to have much of a purpose. Yes, Joseph Seed is back in New Dawn, and yes, he still loves preaching to anyone who will listen.

Project at Eden’s Gate has been completely dissolved, and a new group called New Eden has taken its place. Joseph’s son, Ethan (when did this happen again?), serves as the de facto leader of New Eden after Joseph mysteriously disappears.

Tensions rise when Joseph makes his triumphant return, and Ethan is forced to step down from power, but that dynamic is barely explored at all for it to have any real impact.

The focus here is on Prosperity’s conflict with the twins and the Highwaymen, and even then, it’s not all that riveting either. Just like Pagan Min in Far Cry 4, the twins mostly interact with you via radio calls to voice their displeasure whenever you accomplish something in the game.

You meet them during a handful of key moments in the story, but again, they’re brief and not terribly memorable.

One particular moment in the game sees the player character completely at their mercy, and the twins clearly have the option of just beating you to death. But instead of confirming the kill, they randomly decide to walk off to investigate something else.

It brings back that ol’ Far Cry 5 problem, where the Seed siblings would be able to capture the Deputy at certain points, make them do a whole song and dance, then allow you to escape their clutches. How silly of them.

The twins themselves looked like they had potential as well, but there’s too little story content to help flesh them out properly and allow us to fully understand their motives.

Look, Vaas from Far Cry 3 didn’t have much of a motive either. He was just straight up insane. But at least he was threatening and menacing enough to always keep our attention whenever he was on-screen.

The twins, and every Far Cry villain since Vaas for that matter, have never quite managed to achieve that kind of screen presence.

So what exactly is the focus again? The conflict. Which part of the conflict? The part where you do a whole bunch of filler missions in preparation for your next cutscene with the twins, before they elude you yet again and you have to continue upgrading your camp to keep up. Oh, and Joseph Seed and New Eden are there too.

Throughout the course of the story, there are two points in the game where your story progress is just completely stalled until you’ve upgraded Prosperity to a certain level. The idea here is to get you to stop and check out the side content so that you can grind some Ethanol, which is fine, but not if it’s being used to pad out your playtime and serve as a story stopgap.

As I approached the end of the story, I hit a wall with one of the least interesting boss fights I’d ever seen in a Far Cry game. As it turned out, I wasn’t able to clear the fight with Rank III weapons, which are the second highest tier available in the game.

If you weren’t able to deal enough damage, the fight would get dragged out, and the boss would regain health.

After replaying seven out of the 10 outposts I’d liberated in the game, and embarking on a few expeditions, I was finally able to craft an Elite-tier weapon that allowed me to deal enough damage to win relatively quickly.

It’s all about the grind in Far Cry New Dawn, a game that isn’t even a proper RPG as it is an adventure shooter game. The process was rather aggravating, all for a boss fight that seemed to be all about your gear, rather than your skill level and ability to outwit the enemy.

The ending of Far Cry New Dawn was meant to serve as some sort of emotional payoff, but with the story’s runtime being relatively short, its impact was lessened, and certainly marred by the very uneven pacing and uninteresting plot overall.

Despite my countless gripes with New Dawn, there is indeed one redeeming quality to be found here, other than the gameplay which, let’s face it, is more or less the same in every Far Cry game since 3.

New Dawn offers more insight into the character of Joseph Seed. Not in the campaign itself, mind you, but in the little lore and text notes you can find scattered around Hope County. Sadly, most of the interesting bits of the story and the details I wanted to be fleshed out in this sequel were all tucked away in optional notes you could miss so easily.

Far Cry New Dawn is a standalone sequel to Far Cry 5, but it adds nothing of meaning or value to the original story, and it certainly doesn’t provide the kind of closure to FC5’s insane ending that you might’ve been hoping for. If you just want more Far Cry, this is worth checking out. Otherwise, you’re not really missing much here.