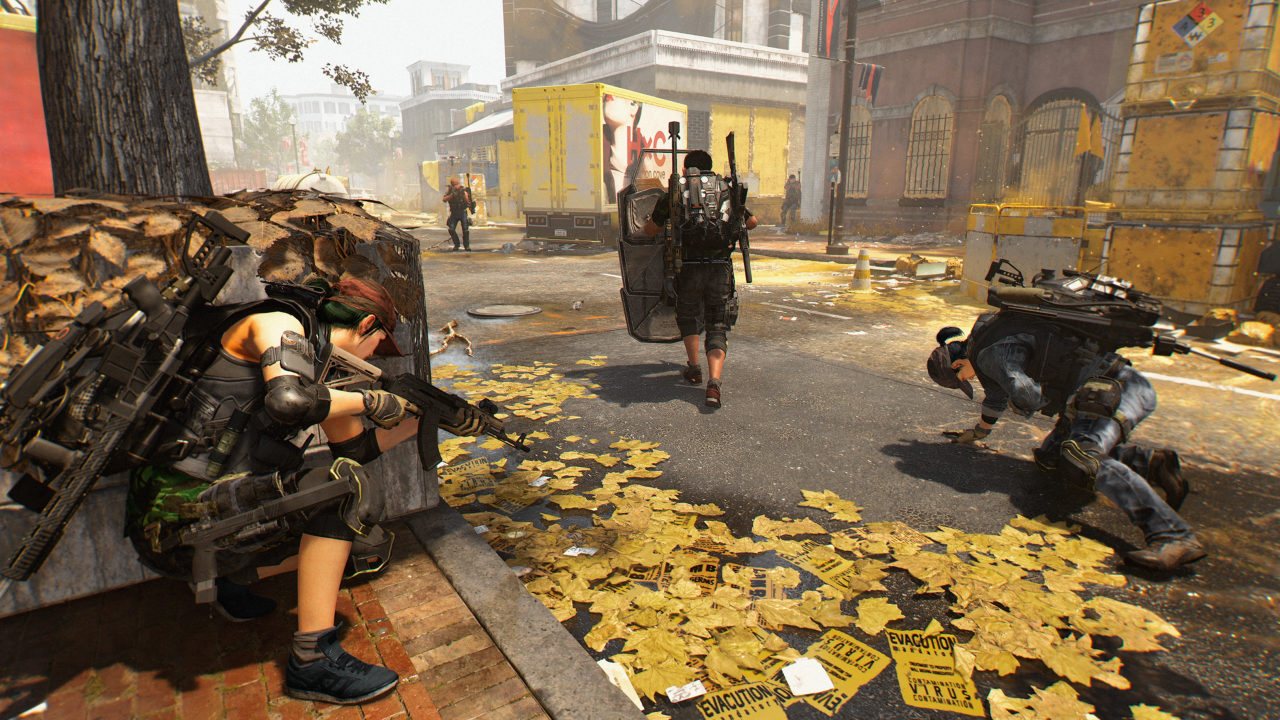 Recently Twinfinite had the opportunity to stop by and say hello to our pals over at Ubisoft and Red Storm, the folks behind the anticipated third-person looter shooter, The Division 2.

The Division 1 had its issues early on, but over the course of its lifespan improved many parts of the games in response to fan feedback.

Terry Spier, creative director of the The Division 2 from Red Storm, is looking to make a great first impression on launch day owners this time around; especially when it comes to the game’s PvP and Dark Zone game modes which like the rest of the game, evolved a lot over the lifespan of the first game.

We had some hands-on time with both the PvP and PvPvE game modes and walked away impressed. We then spoke to Terry Spier about the goals for both of these game modes. Without further ado, let’s dive into the full Q&A.

Andrew McMahon of Twinfinite: With the introduction of three Dark Zones, do you think it will alleviate the pressure of griefing many experienced in the original?

Terry Spier, The Division 2’s creative director: I think we’ve taken a lot of steps with our mechanic systems to make sure that the Dark Zone is a fairer, more inclusive experience this time around.

We are aware that some players were kind of afraid to even step their toe in and that the barrier to entry was pretty high in the first game.

So we’ve done things like turning off hostile VoIP (Voice Over Internet Protocol or IP) and normalized the Dark Zone gameplay this time around.

When players enter, we wanted to make sure that they don’t necessarily feel like they are running up against people who have put a lot more time into the game then they have, feeling as if they always going to lose those engagements.

We also have intro missions where we let players get a lay of the land. You can explore the Zone, as we tutorialized a few of the mechanics, showing you how to extract if you’ve never done it before.

Checkpoints and extraction locations are also highlighted, so it gives you an opportunity to explore the zone without the threat of PvP. This is all with the goal in mind of making sure more players get exposed to this great part of the The Division 2.

Andrew: So does each zone fall into a different difficulty level?

Terry Spier: We didn’t necessarily think of them as individual difficulty levels. You do unlock the Dark Zones along the progression of the main campaign.

People will expect that since Dark Zone East comes earlier in the progression that it might be easier. That isn’t necessarily the case though.

The gameplay is the same and the variety comes from the overall feel of the biomes. Some people who like to use shotguns might want to be in DZ South, as it is more close quarters combat and there is a lot more interiors.

We do believe players will probably gravitate in their playstyle to one or the other but it’s not that one is inherently more difficult than the others, apart from the occupied Dark Zone which unlocks once you reach endgame.

In its rotation, whatever zone is occupied will be the hardest PvE content that we have. It will be no rules, no normalization, and friendly fire is on.

That means if you see another Agent and shoot at them, you will immediately be engaged with them. So that is the hard Dark Zone if you want to think of it that way.

Andrew: Conflict is obviously a big new introduction. When it comes to the decision to make a Deathmatch mode, was that something that came about based off the input from the original? Or was it a way to balance out PvEvP to freshen things up?

Terry Spier: Well it is exactly that. I think that we saw over the course of the launch of the first game that as we continued to evolve the Dark Zone experience, there was still some group of players that would ask for no PvE in my PvP.

Skirmish solved that problem a bit in update 1.8. We finally released our version of team deathmatch and got a really positive response from players who had been making due with what we’d given them in the Dark Zone.

Many players really just wanted a session based PvP experience. So this time around it was something that we wanted to do from day one.

We are fortunate to be able to launch with two game modes in Skirmish and Domination and three unique maps that we built just for PvP. That is something we have never been able to do before.

All of our maps have always served multiple masters. This time around we are able to focus on just the constraints and nuance of the game modes we are shipping for the level design.

Andrew: Could you elaborate on whether there will be day or night cycles for the maps or any possible weather conditions that could affect things. Similar to snow’s role in Survival in the original?

Terry Spier: The Dark Zone is seamless with the whole world, so the weather rotates as it does with the rest of The Division 2. Inside of Conflict there will be a set time of day and weather for the maps.

But weather condition affects is a really cool idea. Maybe for post-launch or something like that.

Andrew: What is the incentive for people that are lone wolves to want to play Conflict and go into the Dark Zone in The Division 2?

Terry Spier: I think we have give people who like to play solo a lot more feedback for things like where other players are inside the Dark Zone. You can open the map at any time and see if a landmark or Dark Zone drop is being engaged.

It gives you a little bit more information as player to avoid other groups if that is what you are interested in.

With the new Rouge Loop being entirely driven by PvE actions, you can spend an entire night in the Dark Zone just doing that loop by yourself. Normalization also means fights will be inherently more fair.

If you do happen to run into some other players and you are good enough, you might win against a group of four. It is not something where we are filtering out solo players.

You can absolutely have a solo player experience in the Dark Zone, and it can be lucrative for you. The whole intention of the Dark Zone, being about greed, is that there is a little bit of potential for a faster path through the RNG, farming part of the RPG.

The Dark Zone is there and it’s up to you as to whether you feel like taking that risk. If you are, it is going to be fair and a bit lower barrier to entry this time for players of all types.

Andrew: What is you favorite addition to the Dark Zone in The Division 2?

Terry Spier: I think working in three separate spaces has been really great. It’s been a fun challenge for the team to make sure we differentiate them, both from our own intentions and where they are geographically in the city.

It has been something that has energized the team to be out of the grid of midtown Manhattan from the first game. We’ve been able to do things like have big, open grassy parks and long site lines.

There is a canal in DZ West and Georgetown and waterfront in DZ South. There is a giant diversity in the Biomes that we get to explore.

I think players will really enjoy it and it has been fun to work on as a dev team.

That does it for this one. The Division 2 will be released on March 15, 2019 for PS4, Xbox One and PC. If you’re an Xbox One owner, the original game is currently on Game Pass if you wanted to catch up quick before release. Excited for this changes? Let us know in the comments below.