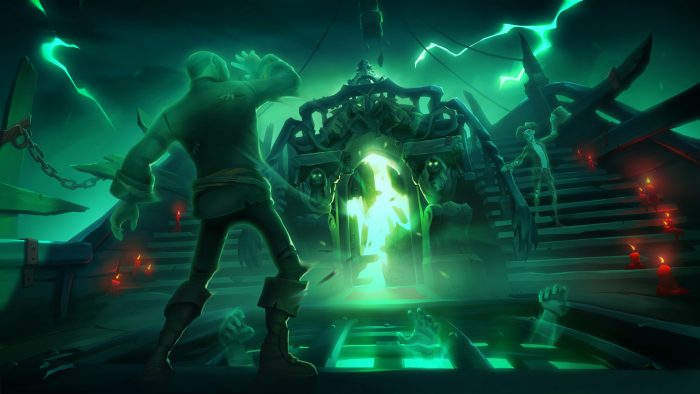 How to Get Athena Quests in Sea of Thieves

Sea of Thieves features a number of unique quests from different vendors throughout the world. Here’s how to get Athena quests in Sea of Thieves.

Sea of Thieves is, at its core, a game about simply existing in a world as a pirate. There is an overarching story, but the reason you’re out on the open seas is piracy.

Part of piracy is working with trading companies to either steal from others, deliver goods in exchange for money or cause havoc in the name of said company.

If you’re just starting out in Sea of Thieves you, unfortunately, won’t have access to this company or these quests for quite a while. That’s because to work with Athena’s Fortune, you will need to have obtained the Legendary Pirate status.

To become a Pirate Legend, there is a lot to do, but it basically boils down to making maximum rank in each of the game’s three factions: Gold Hoarders, Order of Souls and Merchant Alliance. If you aren’t a Pirate Legend yet and are interested in becoming one, you can check out our guide here that will show you exactly what you need to do.

If you have reached the status of Pirate Legend, head to Athena’s Fortune Hideout.

To do this, talk to the Mysterious Stranger in any Tavern.

This character will give you the Shanty of Legends, which is a song that can be played on any instrument. After doing so, a secret passage will open up in the world that leads to Athena’s Fortune Hideout.

Once you’re in the hideout, head over to the large shipwreck. Adjacent to this shipwreck are some shops that can only be found in this area.

Inside the shipwreck is a room occupied by The Pirate Lord. Speak to him and he will give you Athena Fortune Voyages or Athena quests.

Just as you would with any of the others games’ trading companies, complete voyages and watch your faction XP grow.

Hopefully, that helps you figure out how to get Athena quests in Sea of Thieves.

For more information about Sea of Thieves, be sure to check out our Sea of Thieves Guide Wiki. There, you’ll find tips, tricks, walkthroughs and more to help you become the most infamous pirate on the seas.

Question: How do you get Athena quests in Sea of Thieves?

Answer: First off, you have to become a Pirate Legend. Once you’ve done that talk to the Mysterious Stranger in any Tavern, he’ll give you a shanty that will let you reach Athena’s Fortune Hideout. Head to the large shipwreck and talk to The Pirate Lord, who will give you Athena Fortune Voyages or Athena quests.