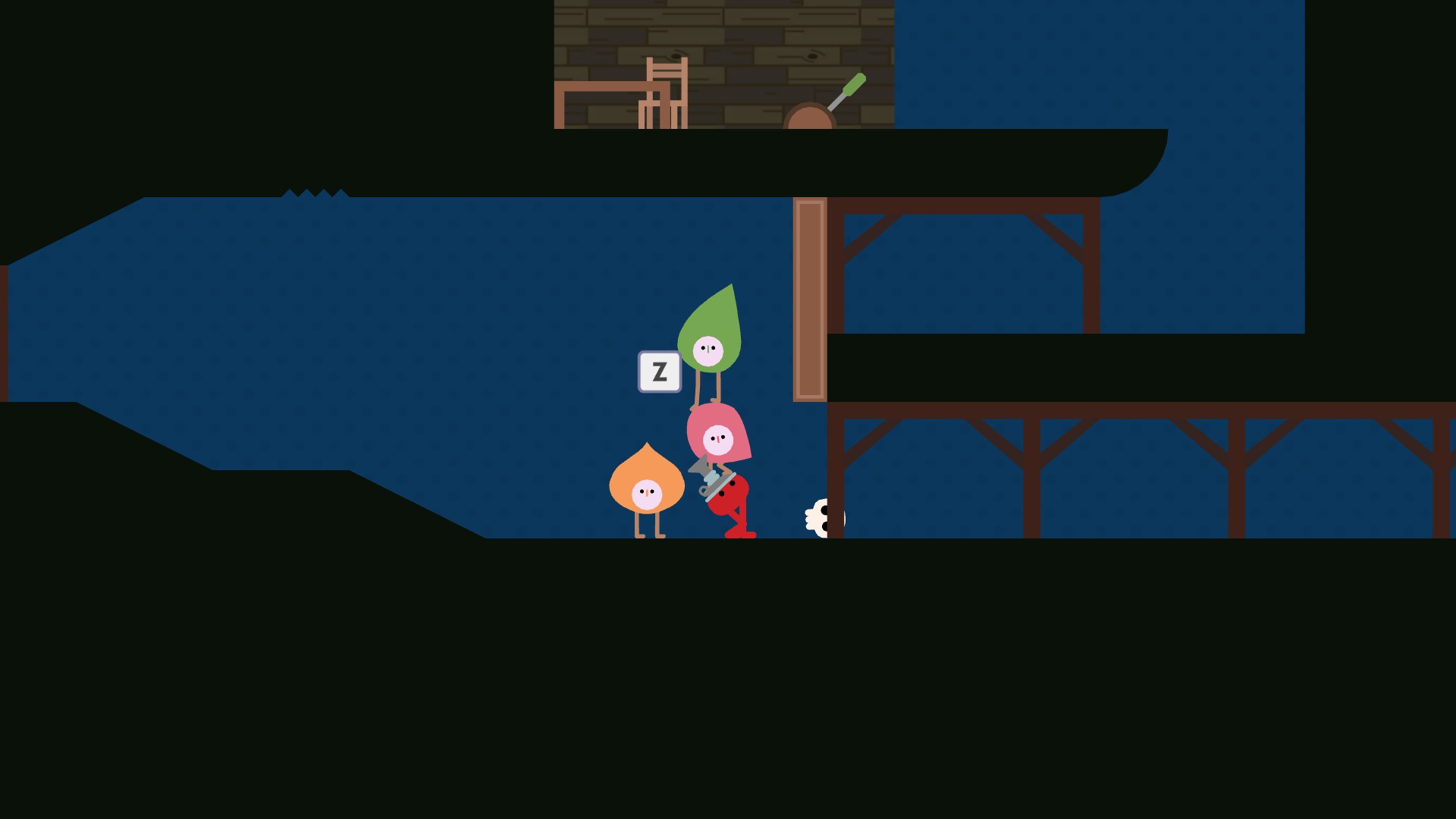 Pikuniku is the type of game in which one moment you’re rescuing vegetable-shaped blobs stuck on trees, while another sees you invading the realm of a giant demonic piece of toast, in a sequence that pays tribute to classic platformers. It also starts with a pink creature in a top hat enthusiastically offering “free money” in exchange for junk.

Yes, this is Devolver Digital-published, why do you ask?

Your first steps as Piku, the red, round protagonist, see you getting used to its few abilities: moving, jumping, rolling and kicking. As soon as you exit the cave in which you wake up, you’ll notice a distinct lack of arms in Pikuniku’s 2D world, which limits your means of engaging with others to speaking or kicking them in the face.

As humorous as the dialogue sometimes gets, there’s something very satisfying to kicking colorful blobs and watching them helplessly fly through the air for a few seconds. Do it long enough and they’ll start erratically thrashing their own legs about, in an attempt to get you to stop.

This ultimately has no lasting effect on the game world, but I found myself more engaged by fooling around, or just trying to wrestle with the game’s physics while kicking a ball up a slope, than I did tackling the puzzles and platforming required to progress.

As a platformer, Pikuniku doesn’t lean enough into its crazy, floaty side, focusing on rather bland sequences and mini-games instead.

Whether it’s a small stretch of Mario-esque platforming where wrongly timing a jump sends you back to generously placed checkpoints, running away from a giant robot while jumping over and rolling through obstacles or arranging wires to reroute power, you’re dealing with overly familiar gameplay that has been better executed elsewhere.

A few exceptions do make it in, though, like the Baskick championship, which pits Piku against a local in a match of what’s essentially basketball but played with their feet. You have to improvise when there’s a shortage of hands in your world, I guess.

Kicking a ball around is one of the most unreliable and imprecise things you’re asked to do, but it’s when Pikuniku embraces this floatiness that it shines the most. You can only vaguely guess the ball’s trajectory, while many of your kicks will hit your opponent; and yet, random and unhinged as it is, it feels so right that I found myself wishing more bits were like it.

Pikuniku also doesn’t allow for much creativity in approaching its objectives. There’s only ever one solution to the requests of its unusual denizens and, in spite of its relatively short length, their simplicity only detracts from the overall experience.

Being tasked with entering the Sunshine Club, I confidently waltzed up to the entrance. There, I bumped into its robotic bouncer which, after scanning me, concluded that my lovely flower hat –Piku can obtain and wear several– wasn’t stylish enough.

The only way I would get in was by purchasing a pair of sunglasses from the nearby shop. It might have trivialized things a bit, but I felt let down that I couldn’t engage in a wobbly kicking match with the bouncer in order to get in.

Pikuniku’s challenge never steps into difficult territory and, alongside the lack of options in terms of ways to complete quests, makes for some rather uninteresting gameplay. The only rewards you can look forward to are hats, collectible trophies and exchanges with other characters, but even those only offer fleeting chuckles.

You’re not always told where to go and many of the objectives encourage you to explore or find the purpose of an item by yourself. A separate screen shows you the general area of the map they’re found in, from a total of three, but I either found them without issue or never actually discovered where a side quest or two required me to go. Exploration, however, remains mostly unrewarding.

Pikuniku manages to carve its own personality through bright colors, simple backgrounds, oddly-shaped denizens and humorous dialogue. However, the nature of its visuals makes it so that, even though you get to visit a number of different locations, everything feels similar.

The simple art style works alongside its playful, minimalist soundtrack to create a world reminiscent of a nonsensical cartoon, but at the same time, nothing in it stands out. Simplicity is a double-edged sword– the world’s aesthetics invite initial curiosity but it doesn’t take long for monotony to set in.

Pikuniku is perfectly playable and, aside from a few slowdowns here and there, ran smoothly during the five hours it took me to get to its conclusion. Messing around and randomly kicking various objects and sentient blobs is as satisfying as it is silly. Sadly, it’s not what the game focuses on.

Instead, you spend most of the time roaming and partaking in rather basic platforming sequences, physics or logic puzzles, while trying to figure out where in its fairly small world you have to go to next. Simple fetch quests top off the gameplay offering that’s, ultimately, anything but gripping.

Although its starting moments promise hilarity stemming from the game’s self-aware madness, the story becomes predictable as more of it gets revealed, falling flat on its face by the end. The characters fall into the same pot, and I doubt I’ll remember any of them, save for the main antagonist; but that’s only because I like top hats a lot.

Pikuniku lets players progress at their own pace but refuses to allow its gameplay to tap into the silliness that could have set it apart, or at least introduced a modicum of fun.

Its absurdity, alongside occasional quips do end up pulling their weight, but it’s not enough to save Piku’s journey from being inoffensive and simply forgettable.