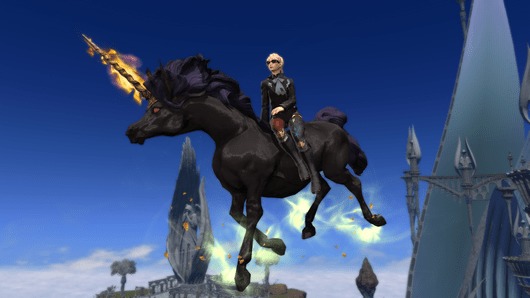 Final Fantasy XIV is now undergoing server maintenance in preparation for the major patch drop coming tomorrow. Patch 4.5 will continue the game’s main story quests, add the third Ivalice raid, as well as mahjong for all the Gold Saucer enthusiasts.

In addition to that, some of the 2.0 A Realm Reborn mounts will finally get the ability to fly. The mounts include the following:

Flight was originally introduced with the Heavensward expansion, where players could receive special mounts that allowed them to fly in 3.0 zones. However, mounts obtained in A Realm Reborn could not fly, which meant that you probably had to be a bit selective with which mounts you were using whenever you were in a flight zone. This should be a welcome change for most players.

In addition to that, while the Blue Mage quests won’t be available in tomorrow’s patch, Square Enix has provided some quest info and information on how you can access the job once it’s out. Blue Mage itself will be made available a week after the patch drops. Other talked about features like Eureka’s final chapter and the world visit system will also be implemented at later dates.

You can check out the complete patch notes here.

Final Fantasy XIV is now available on PS4 and PC. Its next major expansion, Shadowbringers, is set to be released this summer.